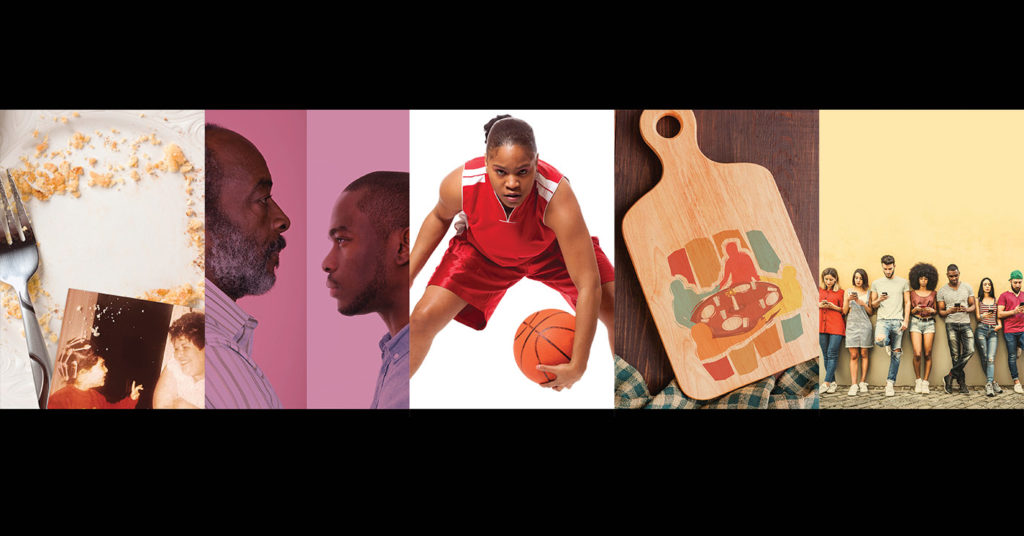 Posters for ‘Nicole Clark is Having a Baby’, ‘Where the Mountain Meets the Sea’, ‘FLEX’, ‘Grace’, ‘Are You There?’

In March 1977, Actors Theatre of Louisville premiered a set of two plays that alternated in repertoire on a bill bearing the quaint title “PlayFaire.”

Those plays, Donald L. Coburn’s “The Gin Game” (which went on to win the Pulitzer Prize) and John Orlock’s “Indulgences in the Louisville Harem,” started what came to be known as the Humana Festival of New American Plays.

Given the extraordinary impact the Humana Festival has had on American theater in the four decades since, it’s worth remembering its fragile origins. Jon Jory, founder of the Festival, staged both plays in ATL’s smallest venue, The Victor Jory Theatre, for a three-week run. It’s also worth remembering that it was Louisville audiences in that first season whose embrace confirmed the notion that such a festival could be a success in the heartland. They bought tickets, and they bought tickets, and they bought tickets. And Jory ended up extending the run of his first tentative experiment not once but twice.

The following year, the program grew to five plays, and over the decades since, the Festival has become not just an annual event but also a driving force in shaping the course of American theater, both through script selection and by building rich networks of enduring professional connections across all the theatrical disciplines.

This week, ATL announces the lineup for the 2020 Festival. It’s the 44th in the cycle. And since it is the first under the leadership of the company’s new artistic director, Robert Barry Fleming, it’s a lineup that will receive close scrutiny here in Louisville and across the American theater landscape. And that scrutiny will reveal both a reassuring mix of familiar elements and some elements that suggest new artistic directions under Fleming’s leadership. (We’ll be talking to Fleming in next week’s issue about his plans and aspirations for the theater.)

To the extent that plays are about “topics,” this will be a wonderfully eclectic festival with interesting regional threads — and some theatrical approaches that, in my memory at least, have seldom surfaced on a Festival bill.

Morgan Gould (who directed a graceful, moving production of Leah Nanako Winkler’s “God Said This” during the 2018 Festival, makes her Festival debut as a writer with a comedy called “Nicole Clark is Having a Baby,” about what happens when a woman who is happy, successful, pregnant — and unashamedly fat — returns home and confronts her fatphobic mother.

The Kilroys — the group of theater activists who have been working to correct the historic under-representation of plays by women, trans and nonbinary playwrights on American theater stages — included Candrice Jones’ “Flex” on its 2019 list of excellent plays deserving of productions. And Actors has picked it up for the Festival. Set in 1997, it’s a play about a basketball team in Arkansas — a team of young, black women — who dream of going pro at the moment when the WNBA has just started league play.

“Are You There?”, this year’s Professional Training Company production — which notably is being directed by Fleming — looks at the impact of technology on social connections.

The other two plays on the bill are notable for their use of music in the narratives.

Of course, music has been employed in previous Humana productions. In 2014, Anne Bogart’s “Steel Hammer” used dance and music to explore the legendary figure John Henry, and many PTC productions have extensive use of music.

This year, two plays in the Festival are moving in new directions.

Jeff Augustin, whose searing “Cry Old Kingdom” premiered at the 2013 Festival, returns with “Where the Mountain Meets the Sea.” Here, Augustin collaborates with The Bengsons, an indie-rock folk duo who’ve been stirring audiences and critics around the country with new approaches to musical theater. Augustin’s script is a time-shifting road trip narrative featuring a Haitian immigrant and his son — and their shared love for Appalachian folk music.

Finally, there is “Grace,” by Nolan E. Williams Jr. This feels like a passion project for both Williams and Fleming, who is directing (and who has worked with Williams in the past).

Williams has a lengthy and wide-ranging resume as a composer, conductor, musician and producer, but this is his first foray into theater — and “Grace” is an extended piece of song-based storytelling that uses the history of African American cuisine to explore a complex matrix of social and personal issues.

In an interview, Williams said, “This idea was inspired when I started looking at food traditions, the way those traditions shape family and community and the way persons who migrated from enslavement in the South made their way north and discovered that their food was an economic commodity. They created catering businesses and restaurants in Philadelphia [where the play is set]. It’s a story that W.E.B. Du Bois codifies for us in his book ‘The Philadelphia Negro.’”

In fact, says Williams, one of the songs in the play, “Bogle, Augustin, Prosser, Dorsey, Jones & Minton,” pays tribute to restaurateurs and caterers that Du Bois documents in the book.

“I’m fascinated by that history,” said Williams. “But I’m also fascinated by the way food becomes a metaphor for both that which sustains us and that which holds us together as a community. It’s powerful how that manifests itself in the types of food we eat, the types of foods we might not have been able to eat at one point in our life, and now I can afford to have entrée foods of a certain nature and what that means for our sense of value and worth and how we esteem one another.”

It was these things, said Williams, that captured his imagination, stimulated his thinking — and has inspired so much music that at this point his dilemma is deciding which pieces will stay in the production and which won’t fit and how to fit in the ideas and characters he continues to discover as the play continues to develop.

It’s an exciting problem to have…

The curtain goes up on the 44th season of the Humana Festival of New American Plays at Actors Theatre of Louisville, this time with a new artistic director, Robert Barry Fleming. You will have to wait until March, however, for the series to begin. In the meantime, here is a rundown so you can make a plan.

‘Nicole Clark is Having a Baby’

Written and directed by Morgan Gould

Nicole is smart, successful, married to a hot guy  —  and unapologetically fat. But her formerly fat, now obsessively thin mom, Helen, fixates on Nicole’s weight. When Nicole visits her hometown for her best friend’s baby shower and reveals that she’s also pregnant, mom and daughter are forced to confront how Helen’s difficulty accepting Nicole’s body — and her own — has shaped their relationship. A deeply felt, irreverent comedy about motherhood, fatphobia and the emotional legacy we pass on to our children.

‘Where the Mountain Meets the Sea’

Music by The Bengsons

Commissioned by Actors Theatre of Louisville

Setting off from Miami, a Haitian immigrant named Jean takes a once-in-a-lifetime road trip out west. Decades later, his son Jonah heads east, following Jean’s route in reverse, and he discovers he’s inherited his father’s love of Appalachian folk music. Separated by time, yet side by side, the two men trace their journeys and the complicated bond they share. With lyrical storytelling and live music, this play vividly imagines how a father and son who longed to connect might come to see each other at last.

It’s 1997 and the WNBA is changing the game. Every player on Plainnole’s Lady Train basketball team now dreams of going pro — but first, they’ll have to navigate the pressures of being young, black and female in rural Arkansas. Will their fouls off the court tear their team apart? Or can they keep their pact to stick together through hell or high water? With all the adrenaline and swagger of a four-quarter game, Candrice Jones’ powerful new play celebrates the fierce athleticism of women’s basketball.

Every plate holds a story in this celebration of a family’s long history with African American cooking — inventing recipes to survive hard times, to keep memories alive and to gather together with love. Created by acclaimed composer Nolan E. Williams Jr., whose vast musical palette ranges from rousing symphonies to jazz and from gospel to R&B, Grace unfolds entirely through gorgeous original songs. A soaring tribute to the dishes that carry a complex legacy, infused with a warm spirit of community.

Performed by the actors of the 2019-2020 Professional Training Company

Commissioned by Actors Theatre of Louisville

From the cacophony of telephone party lines to CB radios on lonely highways to the glory days of online chat rooms, technology has revolutionized the way we communicate with each other. But is it always for the better? In this collection of boldly original short plays, three writers and this season’s Professional Training Company explore the high-tech evolution of our social interactions. Are our devices getting in the way of quality, in-person time with our friends and family? Or could they be another pathway to intimacy? •