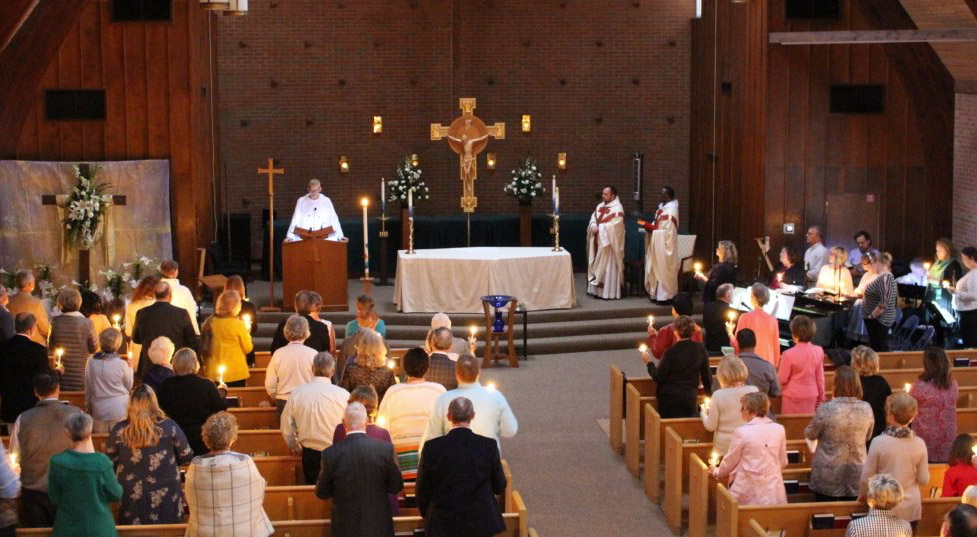 [This is a sidebar to “A Church Apart,” a profile of St. William Catholic Church.]

Here’s a question: A church is not a part of the Roman Catholic Church, but it calls itself Catholic. Is it, though?

“That’s an empirical question,” said Joseph Martos, a Catholic and a Louisville theologian who has worked at Bellarmine and Spalding universities.

And that means the answer is probably going to vary depending upon who you’re talking to.

The Roman Catholic Church is probably what you think of when you hear about Catholicism. It has the Pope, the Vatican and thousands of rules that a parish should, generally, follow if it wants to be a part of the club. It started way back with the historic Jesus, although it took a while to work out the details on the rules. (There are thousands of them, remember?)

In a different realm are the independent Catholic communities that split off from the original Church — informally called “other Catholics” by Julie Byrne, a professor of religion, who wrote the book on these groups, “The Other Catholics: Remaking America’s Largest Religion.”

There are at least two “other Catholic” churches in Louisville: Rabbouni Catholic Community and Agape of Jesus Catholic Church.

They’re different from the Eastern Orthodox Church and the American Episcopal Church, which are some of “the biggest groups usually associated with Catholicism,” alongside the Roman Catholic Church, according to Byrne’s book.

Other Catholics still practice the seven Sacraments and believe in the concept of apostolic succession (the idea that its church leaders come from a line stretching back to the original followers of Jesus).

“Other Catholic” churches typically are more liberal, taking a progressive stance on same-sex marriage and divorces. But some remain conservative or hold a mix of beliefs.

A significant bloc is the Old Catholics (like Agape), which fractured from Roman Catholicism in the 1800s after the first Vatican Council. Members of that group disagreed with the decision to accept the Pope as infallible. Papal infallibility is the concept that when the pope defines doctrine on matters of faith or morals he is always correct. Louisville’s “other Catholics” may not be connected to Rome, but they still identify with the tradition of the religion.

In 2009, the Rev. Lawman Chibundi left the priesthood of the Roman Catholic Church and the Archdiocese of Louisville over two things: what he perceived as a double-standard regarding priests, and a slow reckoning with Catholic teaching — both having to do with marriage.

As a priest, he met couples who had remarried after divorces without getting a Catholic annulment, as well as those in same-sex marriages, and he didn’t like how they could never fully participate in the Church or have their relationship status recognized.

Then, he started thinking about his own barriers to marriage.

Catholic priests aren’t normally allowed to be married, but they can be if they were previously pastors for certain Christian denominations that did allow for their holy men to marry. This happened in the Archdiocese while Chibundi was serving. As a person who had been studying to become a priest since he was 13, Chibundi did not understand why converts would be treated differently than are lifelong Catholics.

After Chibundi left, congregation members from Chibundi’s old parish asked him to keep preaching. Among the draws, perhaps, is that Chibundi is an uncharacteristically enthusiastic preacher for a Catholic priest, giving impassioned homilies in a loud voice that fills the room.

Chibundi agreed to start his own church and 25 people followed.

Chibundi is married now and has a son — and he’s let others from untraditional backgrounds get married at his church, too. Same-sex couples and those who have been married previously are allowed to partake in the sacrament.

Inclusivity is a theme at Rabbouni. Everyone is allowed to take the Eucharist, too — another no-no for Roman Catholics.

Rabbouni also operates under the principle that its supporters are in charge of the church, not priests, and that local churches have autonomy.

What Chibundi believes gives Rabbouni its legitimacy as a Catholic community are valid sacraments: baptism, ordination and the Eucharist.

What makes them valid is that they are performed in the same way they would be in a Roman Catholic Church — and  because of apostolic succession.

Martos might call Chibundi a charismatic leader, someone who started a church based on his ability to lead. Chibundi would have agreed with that at the start of Rabbouni’s existence, but today, he believes it’s grown into something more.

Maurice McCormick grew up in the Roman Catholic Church, and he would have become a priest if not for the rule that they can’t be married.

Instead, he wed his high school sweetheart, JoAnn McCormick but never gave up on the idea of becoming a holy man.

While studying at the Southern Baptist Theological Seminary to become an Episcopal priest, he discovered Old Catholicism and its beliefs on papal infallibility and priests being allowed to marry.

He decided to join the religion and fulfill his dream.

Agape is a part of the Independent Old Catholic Church, one of several Old Catholic churches around the world, a tradition that stretches back to the 1800s.

McCormick’s parish is in Jefferstontown in a small, white building,  home to 120 congregation members. McCormick established the parish 25 years ago after running an Independent Old Catholic Church in Florida for five years.

Disbelief in papal infallibility, of course, is the most notable difference between Old Catholic churches and the Roman Catholic Church. But Agape also differs from Roman Catholicism in that divorcées are allowed to be married in the church without an annulment, interfaith couples can be married without special permission and everyone can be married outside of the church building. Same-sex couples, however, are still barred from receiving the sacrament. Gay priests are not allowed to be ordained either, although female priests are.

Also, Agape interprets the Bible in different ways, notably in its analysis of Mary, the mother of Jesus. Unlike Roman Catholics, the Independent Old Catholic Church does not believe Mary remained a virgin throughout her life, and they don’t believe in her assumption, a Roman Catholic belief that Mary’s body and soul were admitted into heaven. Independent Old Catholic followers don’t believe purgatory exists either — just heaven and hell. And, the sacrament of confession isn’t needed, either, because all of sins are forgiven once you accept that Jesus died for the world’s sins.

Like Chibundi, McCormick sees his church as Catholic, despite its lack of connection to Rome.

“What makes it Catholic to me is the belief in the real presence of Christ in Communion,” he said.

In other words, the belief that the Eucharist is actually Jesus’ body and blood when blessed. And, at Agape, all people are allowed to participate in Communion — whether they’re a part of the church or not.