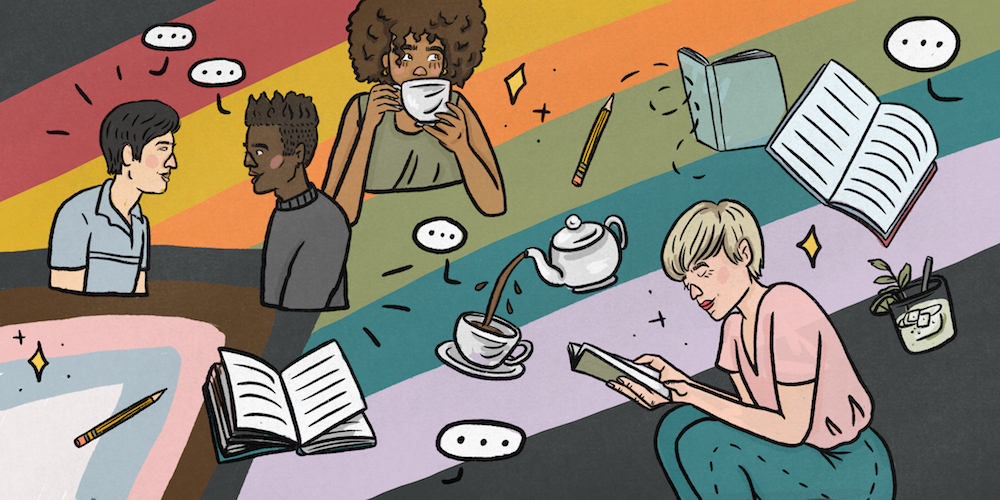 Spencer Jenkins’ first entrance to LGBTQ-friendly spaces was centered around gay bars. “I was partying so much, because I thought that’s what queer life was, basically,” Jenkins, 30, said candidly on a sunny September day in NuLu. “I thought it was bar life, doing drugs, drinking, sex, all that kind of stuff.”

Jenkins’ experience is not uncommon among LGBTQ individuals, who are more likely to deal with substance abuse than their non-LGBTQ counterparts, according to the National Institute on Drug Abuse. In Louisville, as in many other cities, LGBTQ nightlife has historically been centered around gay bars and clubs.

“They were our safe spaces,” Jenkins said. “In the beginning, that’s where people went. It’s kind of just stuck, and now there’s this movement to stray away from that.”

Now, Jenkins is helping to lead the movement to create more sober, LGBTQ-friendly spaces in Louisville. Drawing from his background as a newspaper reporter, he founded Queer Kentucky (queerkentucky.com) in March 2018 and hosted his first queer sober meetup and yoga event in July 2018. Since then, it has hosted more than 20 local, sober-focused LGBTQ events including book swaps and entrepreneur meetups. Most recently, Queer Kentucky partnered with The Mocktail Project to host a queer poetry and story slam at Nanny Goat Books, a lesbian-owned bookstore in NuLu. “It’s important we have things that aren’t just hookup places,” Sarah Gardiner, 25, owner of Nanny Goat Books, said. “Straight people have every place. We deserve some other places too that aren’t just clubs.”

Gardiner and Katlyn McGraw, a Louisville native and a doctoral candidate at the UofL, are the founders of Gayborhood Events. The group organizes and promotes events for queer women and nonbinary individuals in Louisville. The events include meetups at bars, such as its monthly Queer Womxn Dance Party at [now-closed] Purrswaytions, but it also has hosted soccer watch parties and book swaps.

“I want people to feel welcome,” McGraw, 33, said. “I don’t want anyone to feel excluded.”

Even as people who enjoy the LGBTQ nightlife scene, McGraw and Gardiner said bars have their limitations in meeting the diverse needs of the queer community.

“Going out to the bars is a very specific mood, and I don’t want to go to the same place every weekend,” McGraw said.

Trans activist Jeremy McFarland said trans folks can suffer from intense isolation, family rejection and dysphoria that can encourage them to self-medicate. “Especially being a trans person, gay bars are fun, but they don’t always feel like they’re spaces meant for my kind of queer,” McFarland, 24, said.

Though he has found LGBTQ communities through organizing, he said it’d be nice to have safe spaces not centered on drinking or work.

“The more kinds of queer community that can be built the better,” McFarland said.

Arielle Clark is another entrepreneur seeking to fill these gaps in the LGBTQ community. As a black, queer woman, she hasn’t always felt comfortable in Louisville’s gay bars. The first time she went out to a gay bar in her early 20s, she felt fetishized by the white women fixating on her skin tone and trivialized by the white men speaking to her in African American vernacular.

Clark is working to open Sis Got Tea, a tea shop that she said will be a sober, safe space for the black LGBTQ community. To her, a tea shop is a way to create as inclusive a space as possible — one that is free of substances, accessible to those with disabilities and inclusive of all LGBTQ identities.

“It took me until I was 28 years old to feel the feeling that I could really relax my shoulders all the way and be who I really am,” Clark said. “I want that to happen for people much sooner than I experienced that, and that’s what my store is about.”

Clark is raising money to open Sis Got Tea by the year’s end. In less than a week, her Kickstarter supporting the project raised nearly $4,000 of its $6,000 goal.

“The LGBTQ+ community in Louisville, KY, is steeped in bars and alcohol-centric venues that currently do not cater to those who do not and/or cannot consume alcohol and do not serve as safe spaces for black, LGBTQ people,” the Kickstarter page reads. “And so Sis Got Tea was born.”

Larger organizations such as the Louisville Pride Foundation have also been taking strides to address the need for more sober LGBTQ spaces in the city. The foundation’s director Mike Slaton recently tapped Louisville Ballet dancer and avid reader Sanjay Saverimuttu to start the Louisville LGBTQ+ Book Club. The club meets the first Wednesday of every month at the Beechmont Community Center.

“The way of building community here is through either dating apps or meeting people in a bar,” Saverimuttu, 29, said. “This is just a completely new way of meeting people who you never would have met on a normal basis, coming together over a shared book.”

The club’s diverse subject matter has encouraged the members of the group to learn from each other — especially across different generations, Saverimuttu said. Some members of the group described coming of age during the AIDS epidemic, and others were able to explain the importance of pronoun discussions in LGBTQ spaces, a topic unfamiliar to their older peers.

Jenkins described this broadening of LGBTQ spaces in Louisville as a domino effect.

“When your safe spaces are traditionally bars and bathhouses, people tend to fall into those spaces pretty hard and get into bad habits,” Jenkins said. “It’s nice to have social scenes where that’s not even a risk.”