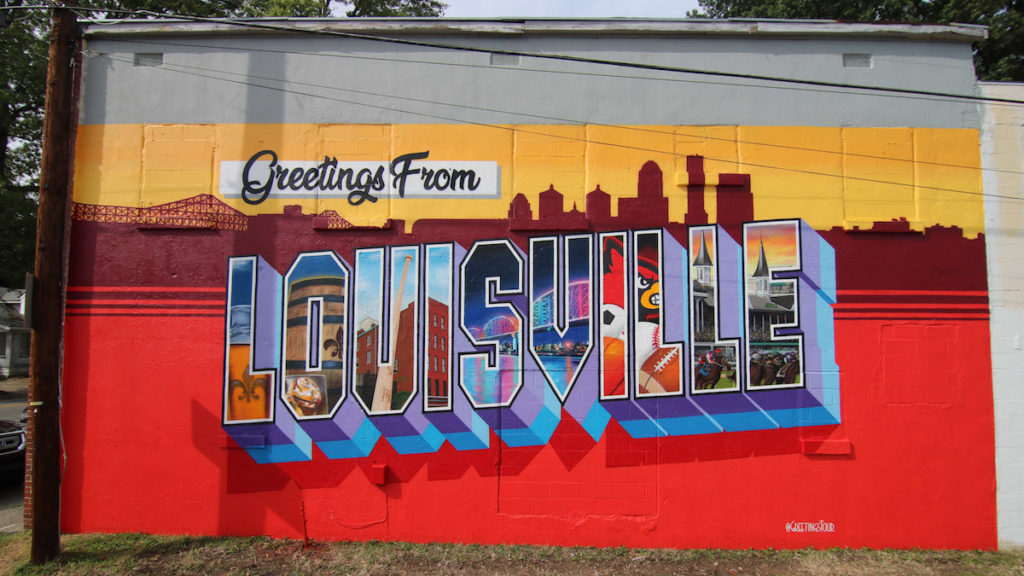 If art is in the eye of the beholder, then graffiti art is sure to have its share of critics. The stealthy art form that marries speed, style, skill and statement has been transforming the urban landscape for decades. Sure, there are pockets of frustrated hellions that get their hands on a can of spray paint just to mark a building with the mundane “Fuck off,” but for those who started the movement in the late ‘70s New York scene, it’s an expression of craft fueled by adrenaline.

Enter Jeremy Lewis, a 30-something artist from Louisville who has spent half his life learning to craft street art and developing his skill. He and three friends — Max Thomas, Ian Muldoon and Jacob Duncan — who also acquired their creative skills and practice through graffiti, have transitioned to becoming muralists, forming the art collective Often Seen Rarely Spoken.

You may have passed by the hand holding the illuminated “NuLu” light bulb with the words, “Together Our Future is Bright” on Market Street or taken a selfie in front of the teal painted electric guitar advertising “Live Music” in the bright alley beside Mercury Ballroom. One of their larger murals in the city is painted at the shelter for abused and homeless children, Home of the Innocents, with an illustration of kid faces with the nonprofit’s tag line “The heart of our city.”

“The stuff that you read about these graffiti writers turned gallery and museum artists is true,” Lewis said. “We’re just trying to put our footprint there from Louisville. Nobody stepped up to the plate from our [graffiti] culture from Kentucky, and we’re just trying to seize this opportunity.”

The four members have been painting together for a decade, but since 2016, OSRS has been a full-time gig for all the Louisville-based artists, while Thomas, who now resides in Cincinnati, travels to Louisville for projects. OSRS knows graffiti culture because they lived it.

“People know about Louisville and Kentucky graffiti,” Lewis said. “Louisville doesn’t embrace graffiti. They think, ‘They’re vandals — they ruin property.’ You have to understand the context of it to wrap your head around it. A lot of people look at graffiti and think that it’s gang-related, not knowing it’s educated people trying to express themselves.”

Now, the OSRS artists spend their days on their laptops Google searching for new businesses and potential partnerships to boost brand awareness for companies while increasing their skills and visibility.

Another mural company, Cincinnati’s Xylene Projects, became mentors to OSRS and was instrumental in jump-starting its business in Louisville. “They are a group of street artists and graffiti writers who found a niche, and they’re good friends of mine,” Lewis said. “They showed us that [a mural company] was possible by picking up projects from companies like Procter & Gamble. I thought, ‘There’s money to be made here.’ It just became obvious. And what we do is nothing new. In Atlanta, there are 25 people that do what we do. In Chicago, there’s 50. It’s in every major city, so we’re just following the lead. This was just the next step.”

In their first year as OSRS, they completed over 50 projects. Year two, they were up to 80 all over the U.S., including a corporate office interior mural for a pharmaceutical company in Philadelphia, and they teamed with other street artists for a tunnel at the Toledo Zoo spray-painting flamingos, tigers and gorillas. A pensive owl mural resides at a cider company in Lexington, and at Churchill Downs during last year’s Kentucky Derby, a temporary selfie wall was painted with big blue roses to replicate the corporate colors of sponsor MassMutual.

“We do sign painting, branding and logo design,” Lewis said. “To keep money coming in, we’ll take whatever and run with it. Of course, when we get creative freedom, that’s like peaking. We’re excited to do that job. We did a campaign with Home of the Innocents, and they had really cool branding, so it was fun.”

Currently, OSRS has a GoFundMe campaign to paint a mural on the wall leading to the viaduct at Sixth Avenue and Hill Street in Old Louisville. The plan is to take the drab and dreary concrete wall and enhance it with bold colors, shapes and a yet-to-be-decided uplifting word or quote. They are currently encouraging the community and neighborhood businesses to contribute conceptual input.

“We consistently encourage artists to engage with communities, recognizing that ‘community’ may be defined in different ways for different mural projects,” Lindgren said. “We believe that community engagement strengthens most projects and amplifies their impacts.”

Said Lewis: “I get on her nerves. I contact her all the time, and I’m sure I overdo it, but I love her opinion on things.”

Lindgren has helped educate OSRS on acquiring blank walls to paint and the restrictions that go along with the process. “While there are regulations to consider when planning a mural, Louisville Metro continues to be supportive of murals, and we work hard to streamline interactions between permitting agencies and artists and organizers,” Lindgren said. “Property owners that we have worked with in Louisville often report that murals are beneficial in attracting visitors and consumers, as well as decreasing vandalism on a property.”

According to Lindgren, Louisville Metro dedicates approximately $160,000 every year to abate vandalism. “Through meetings with Sarah and us driving around Louisville looking at walls, the one at Sixth and Hill just stuck out to us,” Lewis said.

They proposed a mural at the location and even told her they would find funding. She gave the green light, and $1,020 of the $15,000 fundraising goal has been raised.

Louisville continues to take small steps to include street and mural art in the urban landscape. The regional arts organizations Fund for the Arts, the Imagine Greater Louisville 2020 Steering Committee and Louisville Visual Art organized the inaugural Imagine Mural Festival that happened in the Smoketown neighborhood earlier this month. OSRS designed and painted the WAVE 3 News station’s west wall (725 S. Floyd St.) with a vibrant primary color scheme emblazoned with the inspirational phrase “Shine Like the Sun” flanked by a smiling young woman’s face.

“We’re so influenced by public art,” Lewis said. “The aesthetics of your surroundings leave such an impression on your attitude and mental state. We’re just trying to leave our mark.” •