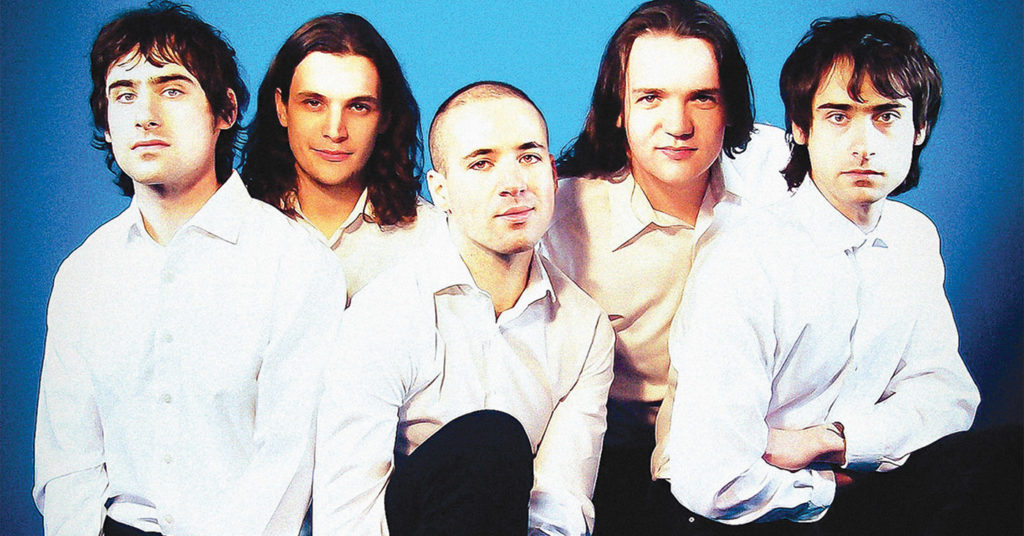 White Reaper has spent the last half decade moving in subtle shifts. Their distinct hook-heavy, high-energy rock with splashes of punk and pop is still immediately identifiable, but they have moved past the straight-forward minimalist fury that defined their early records, embracing something with more breathability and complexity. On Oct. 18, the band releases their fourth album, You Deserve Love, their most ambitious and wide-ranging yet. It’s packed with rich, new-wave-leaning tones and dense atmospheres, but the giant guitars and gritty bubblegum sensibilities still remain. To explain their slow and careful evolution, drummer Nick Wilkerson supplied a video game reference.

“To us, it feels like we’re the same band — we’re just getting better,” singer-guitarist Tony Esposito added. “And I think it feels really good to have that mindset. And I think every time we have went in the studio, we’ve made a better record than the one before by simply using the skill that we’ve crafted on the road to just do it better.”

You Deserve Love was recorded over two weeks in Nashville with producer Jay Joyce. Before they went into the studio this past January, the band said they felt like they weren’t in a good place. They hadn’t played a show in six months. Management and label changes happened. They felt like they weren’t moving forward. Paranoia started to creep in. Were they going to loose the momentum that they gained in 2017 from the widely well-received album, The World’s Best American Band? But, everything worked out. They ended up signing with a major label, Elektra Records, a subsidiary of Warner Music Group, which provided a large studio budget.

“Things fell into place at the perfect time, before everyone went off the deep end,” Esposito said. “And then we got in the studio and we were like, ‘Oh yeah, this is what this feels like. We are a band. And we’re really happy to be here.’”

“I think the hope we had making it found its way into the ether of the record in some kind of abstract sense,” keys player Ryan Hater said.

Two years ago, they wrote The World’s Best American Band almost entirely in the studio. They had a few iPhone Voice Memos made with loose ideas, but the majority of that album was written on the spot. Sometimes they would work for 10 hours and walk away with nothing. They fell behind and had to book more studio time. With You Deserve Love, they had everything demoed out in advance. The skeletons of the songs were already built — they just had to color everything in, which gave them more room to explore.

In an attempt to quantify the sonic changes from the previous album to You Deserve Love, I asked each member individually how they approached their instrument this time around. One of the most noticeable differences on the record is the versatility of the keys and synths.

“There were a lot of keys and synth options in the studio, which was a big difference from how we’ve done stuff before,” Hater said. “There was like everything to choose from. …There was a lot of fun experimentation with a bunch of different stuff. I got to play a lot of really cool organs and pianos and things like that.”

Nick Wilkerson said he tried to simplify his drumming and focus on the basics to capture rich sounds.

“On the last record, I played a lot of fills and tried to impress people by being as upfront as possible, but on this one, it’s kind of more the ABCs of drumming,” Wilkerson said. “I got inspired by old ‘60s studio players and tried to tone it down a lot, and I’m really glad I did that on this one, because Jay got some really good drum sounds.”

This is the first time they went into the studio with their most recent member, guitarist Hunter Thompson. Esposito said Thompson did most of the lead guitar work on You Deserve Love, while he focused on rhythm guitar and pushing his vocals in new directions.

“I think the singing was a lot more ambitious on this record from what we have done before,” he added. “It really tested my vocal range.”

Although he’s had plenty of memorable bass lines through the years, Sam Wilkerson downplayed his contributions, saying he just follows his twin brother’s drum work, although he gave a classically White Reaper half-sarcastic, yet good-natured answer to the question.

“Playing bass is easy,” Wilkerson said. “It’s like baking a casserole. You just got to follow the directions, maybe add your own secret flavors and spices. And I tried it with some different vegetables — as in, I tried different bass guitars.” •