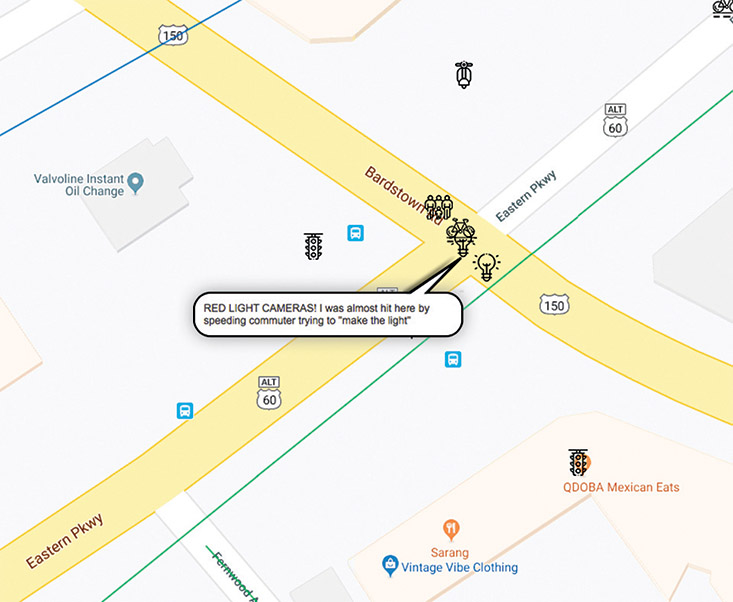 A screenshot of the Eastern Parkways project interactive map.

Have an idea for how to improve Eastern Parkway? If so, you’d join more than 200 people who attended the first public meeting in July to discuss the Eastern Parkway improvement study, which includes the roadway from Cherokee Park to Crittenden Drive. More public comments are available to read on the project’s interactive website: louisvilleparkways.org. They range from simple requests such as replacing signs to innovative ideas that would change the nature of the roadway, such as making a diagonal crosswalk at Bardstown Road and Eastern Parkway.

“It would make cars wait a little longer to move since it would mean an all-way stop, but it would increase pedestrian and bike use on the streets since it reduces the amount of times I need to walk in front of speeding traffic,” the person wrote.

Another said: “Create designated parking areas for scooters and bikes at each major intersection, about the size of 2 car parking spots. This will encourage people to leave their dockless scooters there for the next people to use, and reduce the clutter of left scooters on the sidewalks.”

“We should lower the speed limit to 25,” suggested someone else.

A roundabout was recommended for almost every busy intersection.

The Eastern Parkway project team is scheduled to present the public’s feedback at a meeting Sept. 24 from 6 to 8 p.m. in the Audubon Traditional Elementary School Gymnasium.

Funding for the study is already allocated: $500,000 from the federal Transportation Alternatives Program. The study is expected to be completed by the summer of next year.

The idea to update Eastern Parkway stems from an attempt to lead the thoroughfare back to its roots. The parkway was designed by Frederick Law Olmsted to provide residents with a way to get from their homes to recreational resources, said John Swintosky, a senior landscape architect and project manager for Louisville Metro Public Works, which is leading the Eastern Parkway study.

“That was the original definition of what a parkway was — it was a way to a park — and it isn’t necessarily used primarily for that today,” he said. “And to be able to bring some of that back, and enjoy the pleasure of walking or biking at human speed along this wonderful ribbon of green, that’s part of what we want to make sure is embedded for future generations.”

On that point, some commenters focused on possible ways to return the road to its original purpose.

About the intersection where Poplar Level Road turns into Goss Avenue, a person said, “This would be a great place to remove overbuilt paving/extra turn lanes, and recapture original design intent with space for tree allees [pathways with trees lining either side like what is found in other areas of Eastern Parkway].”

Three commenters replied, agreeing with the idea, but two others didn’t like it. “[The] original design was before cars,” one said. “Any plan to return to that makes no sense.”

Some current problems with Eastern Parkway involve drainage, high travel speeds, ease of access to buses and the elimination of opportunities for other modes of transportation, such as bikes, said Swintosky.

How those issues will be fixed are not yet clear.

The study is only that — a study. There are no current plans for funding actual improvements. Part of the project’s purpose is to determine how much changes would cost, but Swintosky said that they would “certainly” be in the millions of dollars. “Major rehabilitation of a roadway like this of this dimension, you could probably put a big thumbnail number out there of maybe $10 million a mile,” he said.

But that’s if the city tried to fix all of Eastern Parkway’s problems at once, Swintosky continued. And most projects don’t complete 100% of the suggestions included in a roadway plan.

To figure out how long it might take to see any changes to Eastern Parkway, history could provide the answer. The improvement study is a continuation of an original plan that was published in 1994 by the newly formed Conservancy that asked for a rehabilitation of  Olmsted’s creations including Eastern Parkway. That led to a 1999 re-curbing feasibility study and a 2009 “shared use path system master plan” focusing on the four Olmsted parkways.

Eastern Parkway has been singled out for a study, partly due to its high traffic counts. “I would say yes, it’s likely to take some time to implement it, not only because it’s complicated but also because of the current budget environment locally, state and federally,” he said Swintosky. “There’s just a lot of competition for the same money.” Creating a study helps build a case for securing funding, he said. •

The meeting is Tuesday, Sept. 24 from 6 to 8 p.m. in the Audubon Traditional Elementary School Gymnasium, 1051 Hess Lane.