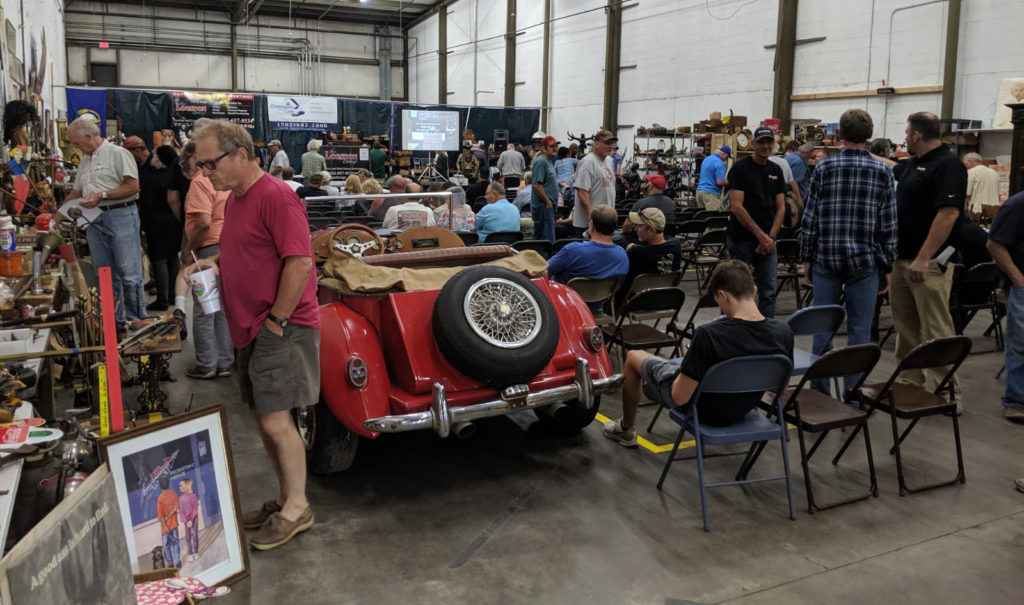 The auction for Jerry Lotz's collection. | Photo by Kevin Gibson.

The gray-haired man who lived in the fairy tale house at the corner of Frankfort Avenue and William Street in Clifton was a neighborhood fixture for decades.

That man was Jerry Lotz, the enigmatic collector whose property was packed with oddball antiques and keepsakes, ranging from vintage advertising signs to figurines to a train car.

Lotz died in September, and on Sept. 27 and 28, his collection was partially auctioned off by The Logsdon Group, a local estate auction house, and Downsizing With Care, in a space not far from his long-time home on Mellwood Avenue.

Further auctions will be scheduled, as Lotz’s collection included a total of three buildings’ worth of items. Roughly 1,500 items were presented during the first round of auctions. The next auctions aren’t yet scheduled, but will take place in the coming weeks.

Lotz’ collection was widely known as “Jerry’s Junk,” but it was really more of a museum. His collection wasn’t stuff he’d pulled from trash bins; much of it consisted of valuable collectibles, the type of stuff the two guys in the show “American Pickers” travel the globe in search of. In fact, Lotz once appeared on that show but frustrated the pickers with his reluctance to sell them anything.

He was noted for his attachment to his treasures.

The auction, in a way, for people who tried and failed to buy a piece from Lotz, represented “a great opportunity to get that piece they had their eye on, but he never sold,” says Shaun Logsdon, owner of the auction company.

The house itself, an oddly-shaped, two-story brick structure, looked in a way like a miniature castle with its iron fencing surrounding a courtyard that once was likely a yard where grass and flowers would grow. Behind the wrought iron, his collection seemingly left no place to walk — assuming anyone would dare to go in.

One curious item in Lotz’s eclectic stash was a replica of the Statue of Liberty, bearing Richard M. Nixon’s face. Clearly a custom job of some type, the statue, instead of hoisting a torch, is flashing the peace sign. Neighborhood lore has it that originally, the ex-president / Liberty statue was offering up a different hand gesture involving just one, not two, fingers. If true, a nearby church asked Lotz to change the statue to make it more welcoming, and he complied.

As a neighborhood fixture, Lotz could appear polarizing. One might stroll be on any given morning and spy him in the upper level of his two-story mini-fortress, window open. He’d be there with one muscled arm on the ledge, the mighty hand grasping a cup of coffee. Often, he looked the part of a wary sentinel, with a countenance of mistrust.

Then, one might happen by later in the afternoon and find him happily chatting with a passersby about his many valuables, the oddball items he held dear.

His collection numbered more than 1,000 items. To illustrate the quirky nature of Lotz’s cravings, a few of the items included: a statue of a gorilla holding an ice cream cone; a red MG roadster; a hearse; an antique ventriloquist’s dummy; a Mickey Mouse clock; a pair of extremely creepy mannequins clad in vintage suits; a life-sized Jar Jar Binks statue, and a railroad crossing sign.

The collection even included a brass bed owned by noted Kentucky madam Pauline Tabor, who operated numerous brothels beginning in the 1930s.

Moments before the auction began, two men briefly chatted outside. One said, “See anything you like?”

To be fair, however, some of the items amassed over the years was indeed seemingly just junk, from a dirty sink to boxes of random, rusted light fixtures and other nondescript pieces. That was just Lotz – it was all treasure to him.

Even a sign advertising the auction noted that Lotz was a “collector of anything different, unusual or ornery for 75 years.”

“I’ve been in this business a long time,” Logsdon says, “but that’s the first time I ever put ‘ornery’ on an auction sign.”

Logsdon said trying to auction it all off at once would have been a mighty chore, a near impossibility due to the sheer magnitude of the collection Lotz had amassed. The decision, therefore, was made to do it in phases.

Proceeds from the auction will go to Lotz’s family, including a daughter who worked with the auction companies to sort and present the expansive assemblage of quirky artifacts. In fact, it’s an auction that Logsdon said Lotz predicted many times during his life.

Lotz apparently told his daughter repeatedly: “When I die, you’re going to have one hell of an auction.”