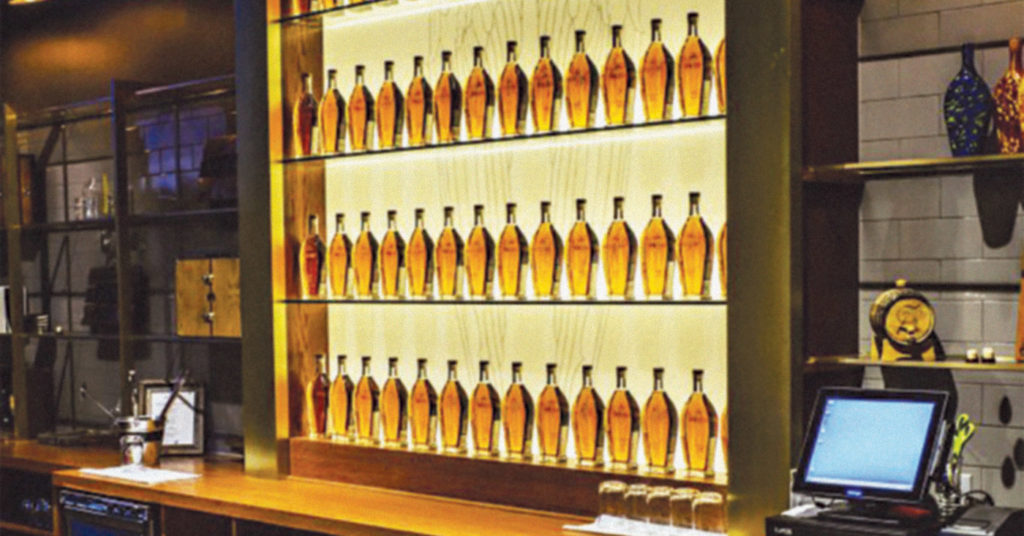 Ben Barker sees tourists in his bar at all stages of their bourbon journey: Before they embark on their tour of bourbon bars and distilleries, while they sop up their 1.75-ounce tasting samples with a solid lunch and then when they’re winding from a day of exploring and amping up for an evening of partying. You might think that tourists and staycationers wouldn’t want to follow up their drinking tour of Louisville distilleries with… more drinking.

“That’s exactly what they do,” said Barker, who is an operating partner of the Troll Pub on West Washington Street in downtown Louisville.

In the three years since distilleries have been able to operate bars, thanks to a Kentucky law change, the impact on existing bars has been mostly positive. Bar owners say they benefit from a culture of alcohol tourism fostered by Louisville’s distilleries. In downtown alone, since 2013, seven distilleries have opened where there once was none, enticing mobs of tourists to pour into the city in an industry Mayor Greg Fischer has coined as “bourbonism.”

“If you’re not getting revenue from that, you’re doing something wrong,” said Wayne Sweeney, director of operations for Merle’s Whiskey Kitchen, another traditional bar not far from Troll Pub.

Olivia Griffin, owner of The Limbo, uses her connections to Bourbon Country to her advantage despite the tropical vibe of her tiki bar: She throws events with bourbon brands, features their liquor in her drinks and takes her employees on distillery tours.

“The reason I opened a bar period, well, there’s a couple reasons, but the main reason is seeing all these bars open — basically clustered around these new downtown distilleries — and knowing and trusting and working, and all of us working together, expecting tourism to rise to Louisville,” said Griffin.

But she also wants distilleries to stick to what they know — liquor creation — and leave the traditinal function of a bar to the ones that already exist in Louisville — especially in a city that’s already struggling with filling service industry bars.

Local distilleries seem to be doing just that.

Their bars sell mostly their own products, and distillery managers told LEO that their bars have helped them grow their operations. They happily collaborate with, and leave most of the alcohol serving, to the city’s existing pubs, lounges and taprooms.

“There’s a market share. We’re respectful of that,” said Dee Ford, brand home manager of the Angel’s Envy distillery. “… I see us as building the foundation and the education and the understanding, and then [visitors] go out, and they can continue to take that knowledge and go ask for Angel’s Envy and understand a little bit more about how the other bars are making cocktails with Angel’s Envy.”

When Troll Pub opened its subterranean, winding basement bar in downtown Louisville, the year was 2011, and there were no distilleries in the city proper.

What once was a booming, city industry in the 1800s had disappeared after Prohibition, leaving bourbon production to other areas of Kentucky once alcohol was (legally) on the menu again. Then, the Evan Williams Bourbon Experience opened in 2013, bringing distilleries back to downtown Louisville but also bringing the idea of distillery tours and bourbon as a tourist attraction.

Every year since, Troll Pub has gotten progressively more business from distillery visitors, said Barker. “It brings people in from, really, all over the world. And my business thrives on that; we’re a direct benefactor because of that,” said Barker.

Angel’s Envy, owned by Bacardi Limited, opened its distillery in downtown Louisville in 2016. The company was able to hold tours and offer tastings in the beginning, but since opening its bar in 2017, Angel’s Envy has greatly expanded its experience-based offerings for visitors.

The distillery offers occasional cocktail-making classes and hosts private events where alcoholic beverages are being sold. Visitors can choose from a rotating list of craft cocktails made with Angel’s Envy bourbon after a distillery tour and ask the bartender questions.

“We knew not everybody knows bourbon and comes in comfortable with bourbon, drinking a spirit straight at the table with no experience and no palate preparation,” said Ford, who is also the chairperson of the Kentucky Bourbon Trail’s visitor team. “So, the cocktail, maybe you’re not a big bourbon fan and you just tasted it, but going into the bar allows them to experience it with maybe some other flavors they enjoy.”

The same is true, and is perhaps more important, at Copper & Kings, a locally-owned brandy-centric distillery in Butchertown whose bar Alex&nder offers rooftop views of Louisville. That’s because, in bourbon country, you can expect even fewer people to be familiar with the wine-based liquor.

But Copper & Kings’ bar, and the events it hosts, have another purpose, said owner Joe Heron: to build the distillery’s brand.

“When you look at brands now, there’s two pillars,” said Heron. “One is trust. I trust this product to work and that it’s good quality. But the other is affection. I love this product because it says good things about me. And that’s what the distillery experience is about today. It’s about making the brand come alive for the consumer and the guest because they experience it in 360 degrees. So, its not only in the bottle, it’s not only in the pot still, it’s also in your glass. It’s also in watching the ‘Rocky Horror Picture Show’ in the courtyard or seeing music or supporting Louisville City Football Club.”

A DISTILLERY BAR VS. A TRADITIONAL BAR

Merle’s Whiskey Kitchen has a lot of things Angel’s Envy’s distillery bar doesn’t: Televisions, live music and lots of people to chat with. “Their bars work like hotel bars,” said Sweeney. “In my personal opinion, what I’ve noticed, it’s kind of like a one-and-done type of vibe. I don’t think they actually go there to, ‘Oh, let’s hang out at Old Forester and party all night.’”

And Ford is OK with the fact that Angel’s Envy’s bar isn’t like that.

It’s open only for events and after scheduled distillery tours. Instead of competing with Louisville’s bars, Angel’s Envy distributes fliers to customers, pointing out various bars around town where the liquor brand can be found.

On the other hand, Alex&nder’s operations are more similar to Louisville’s traditional bars. The lounge sells beer and wine in addition to Copper & Kings’ products. If you want, you can eat food crafted by a well-known local chef, Dallas McGarity. And it’s open to the public.

But its ultimate purpose, Heron said, is to drive sales back to the distillery’s main product. Production and distribution make up a greater share of Copper & Kings’ business than the distillery’s tour, bar and events.

Another potential problem with distillery bars — adding more service industry positions in a city that’s already struggling to fill the ones it has — is not just a distillery growth problem but a restaurant and hotel growth problem. Even Griffin admits that, although she does think corporate-backed distilleries have an advantage with their deeper pockets and ability to attract service employees with higher career aspirations.

Copper & Kings is not one of those distilleries, and Heron, like Ford, is conscious of supporting other Louisville bars.

“These people are our friends,” said Heron. “And we are part of the community together. We should be working to the greater good.”

That’s why, Heron said, Copper & Kings sells local beers at its bar and why it has helped out its neighboring establishments when they were in need — like when a local bar needed a trademark that Copper & Kings owned. When Louisville distilleries and bars work together, it’s only contributing to bourbonism.

“Against the Grain, they sell food and all their beer all over town,” Heron said. “It’s not different to us, selling Monnik beers here upstairs, and they sell our brandy in their bar. We’re in it together. It’s something that’s created a Louisville experience that’s joyful, fun and exciting.” •