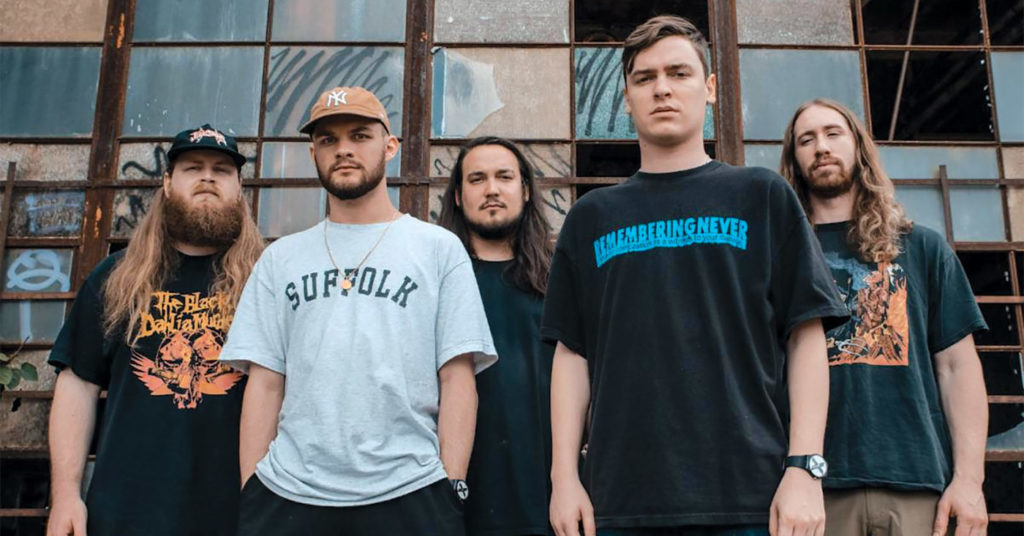 A Different Shade of Blue, the recently-released sophomore full-length from local metalcore quintet Knocked Loose, is packed with angst. After the success of 2016’s Laugh Tracks, the Oldham County band has spent more time on the road, which sets the stage narratively for their new album. The themes are multilayered, tackling loss, as singer Bryan Garris balances the stresses of touring, death and betrayal. Knocked Loose performs at the Louder Than Life festival on Sept. 28. We caught up to them to ask about jazz, depression and religion.

LEO: Tell us a little about A Different Shade of Blue. Is there a particular theme or narrative throughout the album?
Bryan Garris: I don’t know if I would give it a specific theme or narrative. I think there are some consistent things that I touch on, but I think that as a whole, the album just takes place in between our last record and now. I try to write all my lyrics very time or place and very self-reflective. So it’s kind of just been the way that I felt since the last time I got to write about the way that I feel. Quite literally, the name A Different Shade of Blue, is a different look into the way that I feel.

The reason I asked about The Refused is because they were trying to make a statement with the aesthetic, but it also was trying to move forward.
No, no. That’s a cool comparison, but it was not that deep.

On ‘A Serpent’s Touch,’ loss is a central figure, here kind of more like the second stage of grief, which is anger. What does forgiveness look like?
Forgiveness is something that I’ve definitely learned more — to be willing to forgive the older that I get. But I’m pretty stubborn. There are still some things that I can’t control the way that I feel about the people that I have in my life. Or, people that I don’t want to reconnect with or want to forgive. Or even that I could forgive them, but I wouldn’t change how I felt about them. I’m typically an angry person.

Ha! Yeah.
There are just some people that I don’t care to know anymore or care to be close. It’s not even that they did something terribly wrong to me to make me feel this way. Maybe it’s just that we changed and I no longer care for the person that they are now. Forgiveness is something that I’m definitely willing to practice, but there are some exceptions.

Tell us about ‘In the Walls.’ Who is being kept and why? There are a few lines in here that seem particularly grim, that seem to struggle with depression. How do you deal with that?
Songwriting mostly. Being in this band is 100% my outlet. When we wrote that particular song, a bunch of scary shit happened in the studio. And we kept saying that, ‘Oh, it’s the woman in the walls.’ When we finished recording that song, all the power went out. So we knew at that point that we had to keep the theme of ‘In the Walls’ in there. [The band] was like, ‘Oh, you’ve got [to write] about this.’ But I can’t really write about ghosts. It’s never really been my style. I had to find a way to use ‘In the Walls’ as a theme and connect it to my personal life, and that’s the bridge that I found.

In ‘Guided By The Moon,’ the line ‘I was visited by death again’ is apocalyptic. Whatever the personal tragedy, how does your music help with coping?
When we released our last record things really kind of picked up for the band, and it really kind of took us in a direction that we never saw us going. Because of that, we kind of had to really learn what it was like to live on the road, and to miss the things that you miss being gone all the time. Whether that’s birthdays, weddings, holidays or, more importantly, funerals. I’m at an age where you just sort of start noticing that people pass. For years, if I thought of an idea or a lyric about someone specifically, I would just write it down. I eventually had this notepad with all these lyrics that were about this person in particular, and this lyric is about somebody else, and then this lyric is about some other person. Eventually I just put it all together and made ‘Guided by the Moon.’ So ‘Guided By the Moon’ isn’t specifically about just one person, but like I said, it’s about this idea that death is following me around, and I can just dedicate specific lines to specific people in my life.

So the lyric, ‘God fell silent, when I cried out’ can be taken a few ways. But, fuck it: Is there a god?
I do believe there is a god.

Christian God, like dude with a beard on a throne.
Yeah, I would probably say so. But I have my personal qualms with my religion. I’ve kind of touched on religion on everything, on our demo, on our first album, and now on this, because I was raised to believe in a Christian God. When I was old enough to start questioning for myself, I never felt like denying it was a realistic option for me. That’s kind of what the lyrics focus on. The song ‘Mistakes Like Fractures,’ when you view everything you do like the end of the world, the smallest mistake, you view it like a broken limb. It’s like I’m crying out for help, and I’m not getting any answers. But yeah, I do believe that there is a God, I just haven’t had too much of a relationship with him.

I know that some people have a problem with it. I’m an agnostic, which means that I really don’t give a shit. For atheists, that might be a lot more loaded.
I feel like I probably fall into the category of agnostic more in the way that I live my life. I don’t make decisions based on what a God would do to me and I don’t pray. But when I think about if there is a God or a devil, the answer is yes. •