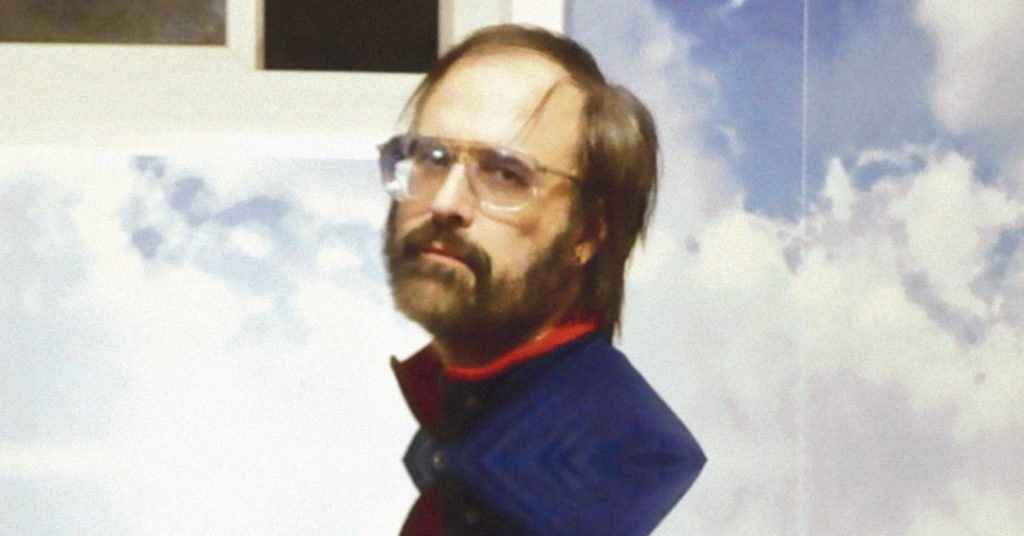 David Berman, one of indie rock’s most celebrated lyricists, passed away Aug. 7 at the age of 52. A few days prior, the former Silver Jews frontman and onetime Louisville resident talked with LEO about his new project, Purple Mountains, who were scheduled to play at Zanzabar on Monday, Aug. 19. The self-titled album from Purple Mountains teeters the country line in all its gut-wrenching storytelling of heartache, with 10 songs about grief, death, remembrance and spiritual longing. The album opens with a stark and haunting line: “Well, I don’t like talkin’ to myself, But someone’s gotta say it, hell, I mean, things have not been going well.”

LEO: From the new Purple Mountains album, you released the first single ‘All My Happiness Is Gone,’ and in the music video are snippets of the last Silver Jews performance in the astounding venue Cumberland Caverns in Tennessee. Is this homage a part of saying goodbye to what was?
David Berman: Yes, is the simple answer. But it also undermines the lyric. That day all my happiness seemed gone. And when you feel that way, it feels gone forever. But the song is evidence that the end was not a real end. I came back. To quote myself from another song, “When failure has you in its grasp, and you’re reaching for your very last, it’s just beginning.”

In the 2007 documentary ‘Silver Jew’ of your tour in Israel, you said the band name may have subliminally led you to seek out your Jewish faith. Do you think with the new band name Purple Mountains (referencing the line in ‘America the Beautiful’) will lead you to become patriotic?
Well, I’ve always been patriotic in the sense that I believe America was an amazing invention, and I still have hope for its redemption. God forbid I was born in the places my ancestors came from.

In the 14 years with Silver Jews, you preferred not to play live shows and did only one official world tour. With the new band Purple Mountains, you’ve already announced a tour with the album release. What’s changed in your thinking about performing live?
When I was younger, and people bought records, I could live on the royalties. Times have changed in those respects. Also, I no longer fear playing live.

This album stems from a difficult place. Getting older, coming to terms, the effect of personal relationships — your mother and wife — and ultimately, for someone so private, exposing your inner thoughts and feelings. Was this album therapeutic for you?
Yes, very much so. It helped me reset my life.

You produced Yonatan Gat’s recent album Universalists, which connected you back to the process of music after a lengthy hiatus. You are a great compliment to his full-force energy. What was it like to produce?
My role was strictly as advisor. Yonatan really produced it himself. I encouraged him to experiment, to make something that sounded new.

Fourteen years ago, you returned to the Jewish faith. Is Judaism still a part of your life? How has it changed you?
No, it’s not. I never found a Jewish community. You can’t be a Jew on a desert island.

You’re a published poet as well as a songwriter. Do you have a different approach when writing in each of these formats?
Poetry can be anything. Music is very constrained, and I prefer working within those constraints. Poetry is more freedom than I need.

What keeps you creatively driven?
Well, I’m the least driven creator I know, so I don’t have a good answer to that question.

You have a few musical connections in Louisville — Tim Barnes, Will Oldham — and recently had a surprise album listening party at Surface Noise with friend Brett Ralph? Care to say anything about these talented gents?
Twenty years ago, I lived in Louisville, in St. Matthews, in an apartment complex called Mallards Crossing. I fell in love with a Louisville girl. At the time, none of those great human beings were living there. I tried to tell the story in the song ‘Tennessee.’ Louisville is a different place now, a city I like and would like to live in again now that Tim and Will and Brett are situated there. Nashville saved me from Louisville in 1998, when Louisville had become a very dark place. Now, I need somewhere to save me from what Nashville has become. Louisville is just that kind of place. A happy, beautiful town.

David Berman, who passed away via suicide, had several connections to Louisville. He lived here for a brief time 20 years ago. He married someone from here. He had friends, labelmates and collaborators from the city. We asked a few of those people to write tributes to the late Silver Jews and Purple Mountains frontman.

“David Berman is one of the most challenging and rewarding of people, of friends. He was a bold and powerful being who was, obviously, extremely selfish and flabbergastingly generous with his love, wit, intelligence and creativity. The first time I met David was in Steve Driesler’s house on Ohio Street (now renamed as the last stretch of Frankfort Avenue before you hit River Road). We were making the Palace Brothers record There Is No One What Will Take Care Of You and Bob Nastanovich brought David by to say hello. At the time, David and Bob were two-thirds of the Silver Jews. It was the Jews’ first release, the Dime Map Of The Reef EP that made me think to send our first recordings to Drag City in hopes of establishing a relationship. It was in recent weeks, David proposed that he, Bill Callahan and I tour together as the ‘Monsieurs of Drag City,’ with all three of us on stage trading off songs. David was brash and fragile, and connecting with him at any given time for any given reason most often felt like a gift. When it didn’t feel like a gift, it felt like an attack. And here we are somewhere in between.”

“I met David Berman in 1997, when I was asked to drum on the Silver Jews’ third record, American Water, and then again on Bright Flight in 2001. I spent a lot of time with David and his good friend Mike Fellows on these records and felt honored to be a part of this endeavor. David was incredibly charming. After he got to know me, he would tease me a bit about my playing style (not sure why!), and we would talk about touring the records (never happened). After he moved to Nashville, he became more of a record collector, something we could also connect on. I am so sad his path took him to such hard places. His music, writing and connection to so many will be cherished.”

“David was my friend for nearly 30 years. We met at UMass Amherst, where we both were studying poetry. From where I’m sitting, David has the most singular poetic voice of my generation — those cusp-of-the-’70s babies who came of age with punk rock and rode the underground wave into the 1980s and ‘90s. His debut collection, “Actual Air,” became an immediate sensation and sold in numbers usually reserved for bad novels and embarrassing memoirs. Generations of subsequent songwriters have tried in vain to approximate the dark wit, the bright wisdom, and the staggering imaginative energy that tumbled from his lips across the records he released as Purple Mountains and Silver Jews.  David Berman was the most brilliant man I ever met, bar none, and I join the world in lamenting the songs and poems that will never be written now. For those of us who knew him and loved him and laughed with him, however, the sense of loss is infinitely more acute, infinitely more tender — and for the time being, anyway, impossible to fathom.” •