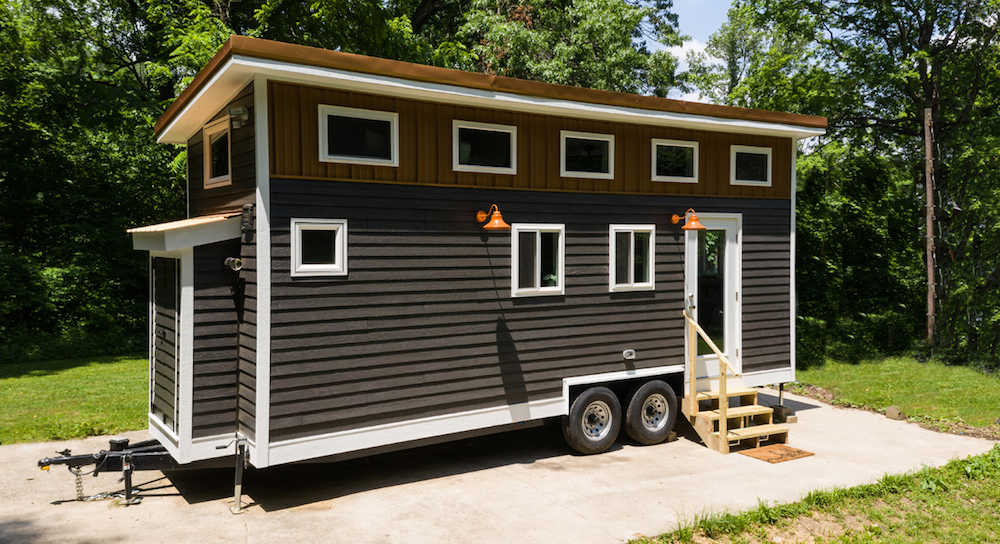 When Mike Beckley wanted to bump up his retirement fund, he was ready to dive into Louisville’s house-flipping market with his son. But inspired by a new real estate craze, Mike’s family had other plans.

The Beckleys thought small — or tiny, that is.

Tiny homes have soared to national prominence in recent years, popular with people seeking long-term investments over monthly rent, a minimalist lifestyle or a smaller carbon footprint. Beckley Tiny Homes is now helping boost the movement in Louisville, and the skeptical dad is now a believer, his son said.

“He thought we were crazy,” J.R. Beckley, who led the design of the tiny home, said, “but he likes it now.”

The company’s inaugural house has already scooped up an award in Nashville from the Tennessee Tiny Living Festival.

Visitors at the event were popping in and out of this local build all-day to see it. And the reaction it received — not to mention its first-place award for best tiny home — convinced Mike that his family might’ve been right about investing in tiny homes. “It just blew us all away. I couldn’t get over it,” he said.

In Louisville, the tiny home curious can buy and consult construction plans from national and local companies, but Beckley Tiny Homes is the first in the area to build these unconventional abodes for clients.

“There’s just a movement,” J.R. Beckley said. “People are wanting more freedom with their finances. The price range of these is so much more affordable than a brick and mortar home. Second of all, they’re so much more cost-effective than an RV, and they have the feel of a luxury home.”

From a business perspective, tiny houses are less investment upfront, and for J.R. Beckley, building them “is way less stressful; it is kind of therapeutic.”

The house’s exterior followed design plans from another tiny home company, but with experience as a contractor and carpenter, he got creative with the house’s interior. “You’re just seeing a little bit of my personality in here,” he said.

It’s equipped with two lofts, a living area, a modern bathroom hidden by a pocket door and a galley kitchen.

“The kitchen,” J.R. Beckley lowered his voice to a whisper, “is a better kitchen than my house,” then laughing and saying there’s more counter space than his 1950s era home.

The tiny house blends a sleek modern aesthetic with shabby-chic accents: a plant creeps out of a matte-blue painted mason jar, funky black and white tile line the wall behind the stove, a retro vintage clock from Gold Meadow ice cream ticks away and a wood sign propped up against the window reads “no place like home.”

Crawling up a staircase to the master bedroom — or master loft — you’ll find a queen bed, a low ship-lap ceiling and natural light from three windows pouring in. Underneath the staircase are two closets for storage. The other loft is accessible with a ladder that easily folds and fits under a futon in the living area.

The house was hardly a month old, but pieces of it date back to almost a century ago. Beckley incorporated reclaimed wood pieces to give a rustic charm and use sustainable materials. Other eco-friendly accents include an LED lighting system, high-efficiency insulation and energy-saving windows.

As to whether J.R. Beckley would ever live in a tiny home, he said why not? He is very close with his wife and kids and doesn’t think lack of privacy would be an issue. And for an added bonus, the house can go almost anywhere. “You’ve got a tiny house on wheels and you don’t like your neighbors you can just take it somewhere else,” he said while laughing.

The 13,000-pound home sits on a custom trailer and is U.S. Department of Transportation compliant, meaning with the right equipment, it can tag along on the road. He hitched the house to his truck and hopped onto the Interstate 65 expressway to get to the Tennessee festival. “It looks so tall when you stand next to it and you’re thinking oh my god am I going to hit an overpass?” He said. But other than drawing attention, as drivers honked or gave a thumbs up, the tiny house didn’t have any problems on the road.

“The American Dream is changing so what people want is different,” J.R. Beckley said, “and we’re hoping we’re on the pulse of that right now.”