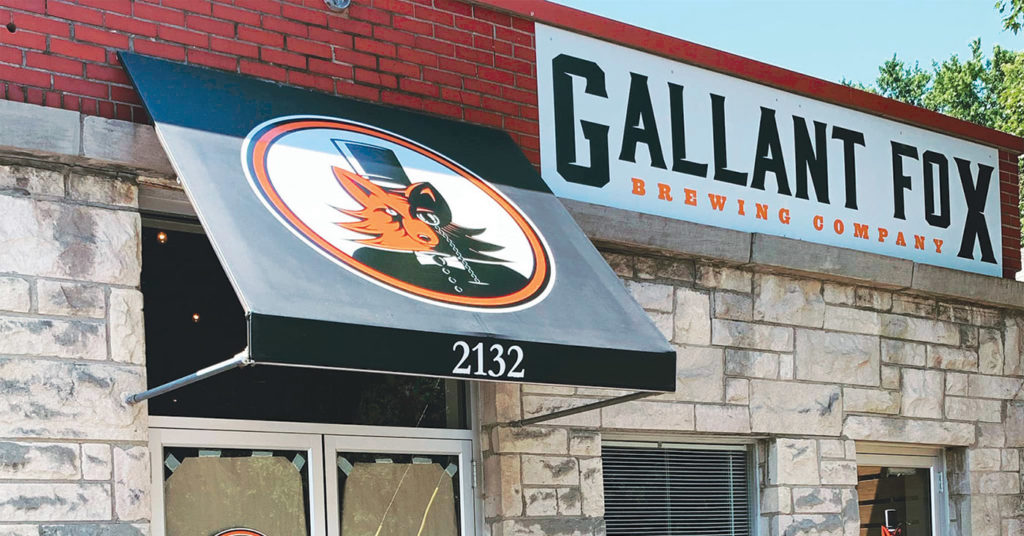 The Gallant Fox Brewing Co. is expected to open in October-ish with 10 to 12 of its own beers as well as 10 to 12 local and regional guest taps,.

Cool your saliva jets. We’ll have to wait several more months to taste delicious hop and malt concoctions from a few of these. However, we know LEO’s beer-loving readership is as anxious as we are to get updates on these impending suds slingers:

Logan Street Market. A taste bud orgy awaits. In just a matter of weeks we’ll be able to purchase fresh produce, dine on delectable food, swig scrumptious cocktails and quaff craft beer, all without exiting the building. Expected to open “sometime before Halloween,” Logan Street Market will house 30-plus local chefs, artisans and vendors, in addition to a wine bar, cocktail bar and Safai’s Wild Hops Brewery. And, it is precisely this merchant ecosystem that will propel unique beverage creation. Being just steps away from the likes of Colonel De Gourmet Herbs & Spices, Prana “vibrant energy” food and Safai Coffee, you can expect both beer and cocktails to benefit from this synergistic relationship.

However, starting a new, 15-barrel brewhouse takes time, so guest taps will round out the cocktail and wine offerings at Logan Street for a few months. “I’d love to have a bock beer ready to release for Bock Fest in the Spring,” said Wild Hops head brewer Maggie Bray. With a background in brewing traditional, German-style beers for Gordon Biersch Brewing Co., as well as more creative craft at 3rd Turn Brewing, Bray plans to find middle ground, capitalizing on the plethora of ingredients she’ll have on hand via the market to inspire distinct brews.

Neil Alvarado, bar manager for Logan Street, plans to do the same. Formerly a bartender at Gravely Brewing Co. (and earning our beer-snob stamp of approval for his beer knowledge), Alvarado is especially excited to pursue his passion for creating cocktails. Between local spirits (like Copper & Kings, Holi Gin and… all the bourbons) and market vendor ingredients such as Curried Honey Syrup, you can expect the cocktail list to be strong.

And, while it’s always 5 p.m. somewhere, the imbibing hour will start at Logan Street earlier than at most local establishments. The website says the brewery will open at 10 a.m. Breakfast beer, anyone?

Gallant Fox Brewing Co. While Bray intends to brew beers that fall somewhere in between “classic and crazy” (see LEO’s Aug. 14 Beer Me! column for official definitions), the brewers at Gallant Fox plan to do both. Homebrewers with a decade of experience and recipes numbering in the triple digits, Patrick Workman and Roger Huff bring a diversity of style preferences to their nanobrewery. Whereas Workman plans to champion the recreation of traditional beer styles such as ESBs, bière de gardes and gruits, Huff plans to push the envelope with unusual ingredients such as Japanese pea flower that will result in a naturally purple beer. “The advantage of running a small batch brewery is that you can experiment with things that you wouldn’t put into a big batch brew,” said Huff.

Once fully ramping up (after its October-ish opening), Gallant Fox plans to have 10 to 12 of its own beers as well as 10 to 12 local and regional guest taps, hopefully some of which won’t be the mass-distributed options you’d find elsewhere. And, it intends for its own taps to represent a variety of styles. But, don’t get too attached to any particular beer. With only a one-barrel system to start, it won’t necessarily offer the same beer twice (at least until demand dictates adding capacity, which they anticipate doing).

While the owners’ and brewers’ personalities, the great location and the supremely awesome décor in the taproom are draws enough, Gallant Fox’s beer names are a Gen X-ers dream come true. It’s likely that a few of their most popular and tried-and-true home brews will be flowing on opening day. These include Cobra KaIPA, Stormin Da Castle, Coco-Nutty By Nature and a Christmas beer called Shitter’s Full (yes, Clark, we’re serious).

We can expect an attempt to replicate this successful model in the Louisville location. The space will be a “live/work/play development” that will host restaurants, other bars, event space, offices and apartments, all overlooking an open-air courtyard.

But, what about the beer?

Kelley Hieronymus, marketing and creative manager for West Sixth shared that the taproom will feature a balance of customer favorites as well as new, innovative beers. Using a three-barrel system, it plans to have three or four NuLu-exclusive brews on tap, as well as a significant barrel aging program housed there.

With these plus a few other hop houses joining our existing 21 breweries in the coming months, we suggest a regimented upper-body workout plan to support the impending increase of 12-ounce curls and stein hoisting (yes, we’ve been Googling “beer drinking euphemisms”). •