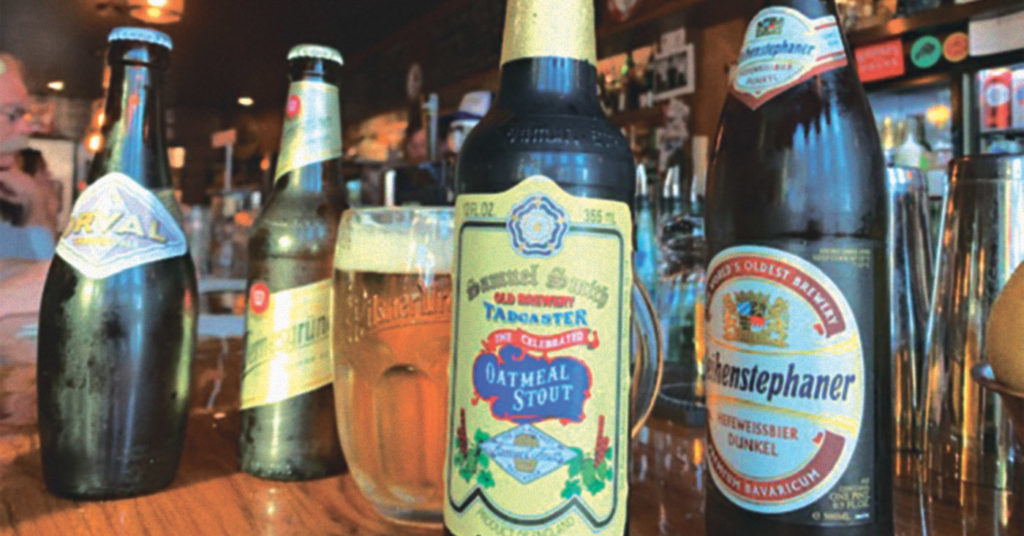 A few of the classics at Pints&union. | Photo by Whitney Martin.

“May I try that Northeast Lactose Milkshake Hazy Bourbon-Barrel Aged Avocado IPA, please?” New beer styles are trending faster than tweets about Trump. Hey, we’re not knocking it. We had a spicy pickle gose at Urban Artifact in Cincy a few weeks ago that was legit. But, with the propagation of “creative” craft, what role, if any, do classic beer styles play?

What is a “classic” beer style?

Avery Brewing Co. brews an Egyptian beer from a recipe dating to around 1800 BCE as part of its “Ancient Ale” series. Does ancient qualify as classic? The 2019 Zymurgy Best Beers in America survey refers to winners Bell’s Two Hearted Ale and Sierra Nevada Pale Ale as “old school.” Is old school equivalent to classic? I mean, does playing Nirvana on the classic rock station make them classic? We don’t think so, but that’s probably because we’re old school.

Through extensive research, we’ve deduced that the technical definition of a classic beer is “anything that falls between ancient and old school.” Think pilsners, lagers, porters and stouts that were being produced circa 1900 or earlier. To continue the music metaphor, “Hotel California” or “Won’t Get Fooled Again” are considered classics due to “the inescapable element of time and perspective” said Roger Baylor (of New Albanian Brewing Co. fame, now beer director for Pints&union in New Albany). It’s not just about when they were created but also how — the quality.

Cory Buenning, head brewer at Gravely Brewing Co. agreed. “These classic styles have been honed over hundreds of years. You can’t come up with a new beer style on a whim and expect it to meet the same standards.” Buenning feels there is still a place for classic styles. And, he should know. Gravely won second place for its helles lager Butcher Holler and first place plus “best of show” for its Czech Two pilsner at Indiana’s 21st annual Brewers’ Cup in July.

Scott Hand, head brewer at Monnik Beer Co., earned our honorary “barstool philosopher” degree as he eloquently outlined the factors that work together to create the vicious cycle that unleashes atrocities like Pastrami on Rye or Blue Cheese beer onto the world (no, we’re not kidding):

1.) Brewing is a creative outlet for many brewers. They like doing something no one else has done and seeing what they can get away with.

2.) There is a craft beer consumer market that’s ready to embrace pretty much anything you put in front of it — the crazier the better.

3.) The rapid expansion of craft breweries means that brewers are pressured to create novel products in order to stand out.

4.) The more novelty beers that craft consumers have access to, the more they strive to “collect scalps” (as Baylor calls it), checking off as many beers on Untappd as possible. This results in a lack of brand, or even style loyalty and forces brewers to perpetuate wacky experimentation just to lure “scalpers” back into their door. Seasonal releases are no longer enough; consumers demand constant reinvention.

5.) A “vocal minority” (as Buenning calls them) on social media and craft beer blogs creates so much hype around the beer-of-the-moment that brewers and consumers alike are tempted to think that these styles are critical to make — and drink — to stay current, relevant and hip. Baylor added that some patrons may feel peer pressure to order the trendy option rather than just sticking with a beer they like, but that may be perceived as “lame.”

In other words, self-proclaimed “craft beer snobs” with thousands of beers logged on Untappd (authors avert eyes shamefully) have only themselves to blame for the proliferation of some pretty extreme and, occasionally, perplexing products. However, there’s a good chance that many of these beer fads won’t last. Both Buenning and Hand have learned not to be too swayed by the hype. The mainstays and bestselling products at both Gravely and Monnik continue to be the classic styles. Seeing what people in the taproom are actually drinking keeps them grounded.

Once craft beer drinkers experience “long-term palate fatigue” thanks to overconsumption of unbalanced flavor bombs, they will come back to balanced, dryer, lighter-bodied styles that, after all, are what the classic styles tend to be, said Hand. We’re already seeing an increase in craft pilsners and lagers.

Like with most things, it’s likely the pendulum will swing back the other way, with people demanding a return of the classics. And “demand” will be necessary. Many distributors don’t even want to carry some of the original imports that literally defined the styles (Saison DuPont, Orval, La Chouffe, Pilsner Urquell, Duvel) because they have to make room for the trendy craft beers that are flying off the shelves, said Baylor.

What are we taking away from all this? Perhaps a craft consumer “call to action” is in order. Go ahead and try novel beers. After all, brewers pushing the envelope is what it takes to evolve beer, and there is room for more styles, said Buenning. However, don’t be afraid to patronize beers, styles and breweries that are delivering consistent, balanced and well-executed classic styles. In other words, it’s OK to come for the crazy but please stay for the classics. •