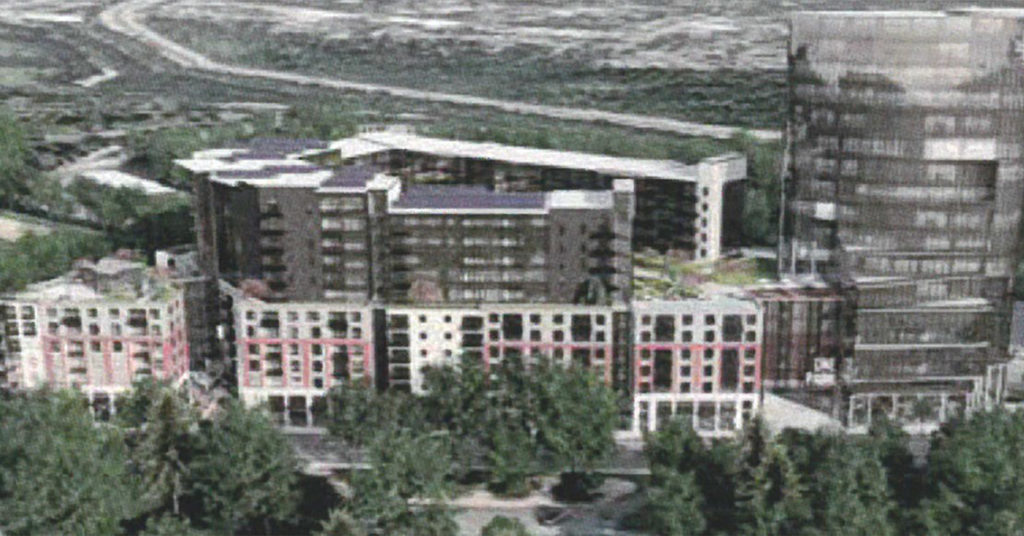 On a triangle-shaped parcel near Cherokee Park, a familiar debate is playing out. A developer, Kevin Cogan, is proposing One Park, a large-scale development project on the site. His plan includes a hotel, 421 apartments, restaurant and retail space contained in one large structure topped with an 18-story tower. It’s an ambitious proposal, especially for Louisville, so it’s no surprise that it has provoked a wide range of reactions. What follows is not a full-throated endorsement of One Park; there are many criticisms of its design that are perfectly legitimate. However, there is one oft-repeated attack on this project (and others like it) that I feel needs to be addressed: that it is “too tall” and “out of scale” with the neighborhood.

The desire to preserve “neighborhood scale” is understandable, especially if it is viewed as a reaction to the 20th century urban renewal schemes that leveled block upon block of buildings and uprooted communities. The negative externalities of the current real estate development industry are also cause for legitimate concern; its financial and economic constraints encourage developers to build cookie cutter-style buildings that rarely exhibit individuality or local architectural flavors. But the focus on the scale of a new building is problematic for several reasons.

First, the idea that a specific scale should be maintained by new development does not mesh with how cities fundamentally function. If there is one constant truth about cities, it is that they change. In a healthy city, the streets and neighborhoods that compose it are in an almost constant cycle of growth, change and regeneration. Open spaces are filled with buildings, and those buildings are torn down and replaced with larger ones. Not only has this process been shaping Louisville since its founding, but it has given us many of our most cherished landmarks. Photographs of Fourth Street in downtown Louisville in the mid-to-late 19th century show a distinctively small-scale city: ornate mansions and commercial buildings that rarely exceeded five stories. Yet this neighborhood was turned to dust to make way for some of Louisville’s greatest historic buildings: The Seelbach Hotel, The Louisville Palace, Stewart’s department store and others were built on the rubble of older buildings. If we were having the same debate in the early 20th century, would some be arguing that The Brown Hotel was out of scale?

Additionally, forcing new development to stay at or below a certain height or density directly interferes with other efforts central to making Louisville thrive in the coming century. The ability of our city to reduce its contribution of climate changing greenhouse gas emissions and generally be a greener, more resilient community is intimately tied to the usability of mass transit, biking and walking. Dense nodes, communities and corridors are key to making those transportation modes a convenient, viable alternative to using a car. It is for this reason that David Owen, in his book “Green Metropolis: Why Living Smaller, Living Closer, and Driving Less Are the Keys to Sustainability,” argues that the “greenest” cities are not low-density places such as Portland, Oregon but high-density places such as New York City.

This is not an argument for letting developers do whatever they want, or that what they build should not be analyzed critically; this is an argument that we as a community are not focusing on what is important for shaping design and development in Louisville. The true enemy is not tall buildings or dense buildings — it’s bad buildings, and bad buildings come in all shapes and sizes.

Instead of wasting time and energy debating scale or density, we should be discussing how building design can be relinked to local architectural traditions; how the design of new developments can be made functionally appropriate for urban spaces that create a high quality experience for pedestrians, bicyclists and transit riders; and how they can be made into unique and interesting places to live, work and shop.

I wonder how the design of the One Park project would be different if, instead of spending precious time in public discussions or zoning hearings debating its height or scale, we all worked to improve its architectural details and functionality: That would include how it could make a richer experience for pedestrians, how it could encourage residents or visitors to ride bikes or take transit and how it could reflect local architectural flavors and relate better to its surroundings. That sounds like a far more productive conversation to have, and one that moves Louisville toward being a truly great 21st century city. •

Porter Stevens, a native Louisvillian with a masters degree from UofL’s Urban Planning Program, is an urban planner in Pennsylvania and passionate about urban planning issues in his hometown.