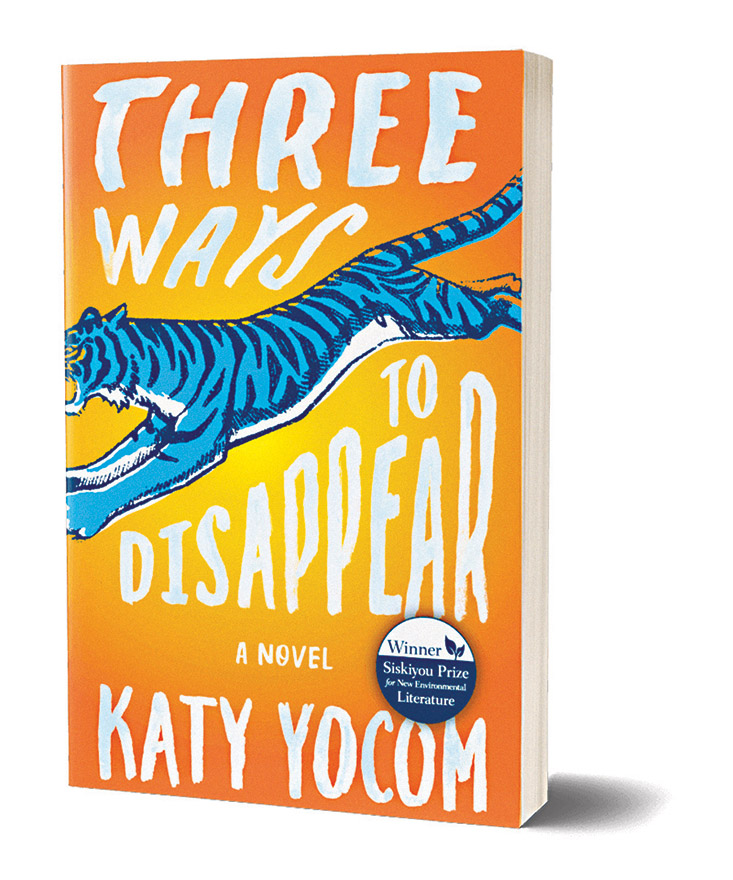 Ambition is sometimes hard to find in a novel dealing with conservation and nature. That might seem counterintuitive — but the complexity can build to an overwhelming experience when the scientific matters are presented on one hand, while cultural conditions that generate conflict also demand a fair hearing. And then the author has to keep a character arc moving for the protagonist. Plenty to juggle, right?

But not in Yocom’s view — that much plot is just a warm-up. The debut novel by this associate director of Spalding University’s celebrated MFA in Writing program is very demanding but equally rewarding, in many dimensions. The endangered tigers of India are vital to the story — but their survival in the jungle and grasslands isn’t any more integral to the plot than is the simmering-for-decades drama of the family of a member of a wildlife rescue foundation.

Sarah DeVaughan is a vivacious invention — a former journalist who may have finally had enough of globe-trotting for stories that aren’t wrapped up before she has to move on. But now she’s working at the locale of a tragedy from her childhood. And her independent nature just seems to stir things up no matter what she does, so the local Indian press looks to sensationalize her interactions with the big cats.

It would be understandable for the author to keep zoomed in on Sarah through subplots of complicated romance and her initiative to help women’s role in the economy of villages near a tiger sanctuary. But this character is nominally central to only half of the novel’s chapters. Sarah’s sister Quinn is in Louisville, trying to deal with her own family problems, yet she’s haunted by the past (and the nearby presence of a somewhat-imperious mother who has demons of her own).

The “Quinn” chapters ground this story, often putting some welcome brakes on the superheated charge of everything happening to, or because of, Sarah. Glimpses of the day-to-day of the tender but troubled family in Kentucky are used well to reveal perspective and subtly insert exposition. But those chapters have to justify their presence while not disrupting the flow of the book as a whole — and sometimes adjacent chapters read like they were brought together from opposite ends of the library.

Do you learn plenty about tigers here? Yes. And the portrait of life in the rural fringes of India might alternately fascinate you, break your heart and drive you to find someone to point a righteous, blaming finger at (spoiler alert: no easy villainy to be found). And there’s more, including multiple ways of looking at how sisterhood is built under conditions of loss — these reverberate after the book is put down.

By the way, consider keeping a dictionary handy, as Yocom likes an intense vocabulary. But she also offers many moments sharing the alchemical combination of gently-crafted language and direct observation. That’s been key to many a classic for both fiction and nonfiction dealing with conservation and the environment: “Whoever thought the countryside was quiet had never been around birds in the morning. Sanjay identified their calls: white-bellied drongo, Asian paradise flycatcher, rufous-tailed shrike. Sarah sat back and listened, both to learn a few things and to enjoy the cadences of Sanjay’s voice, the British cast of his vowels, the v’s instead of w’s: jungle varbler.” •