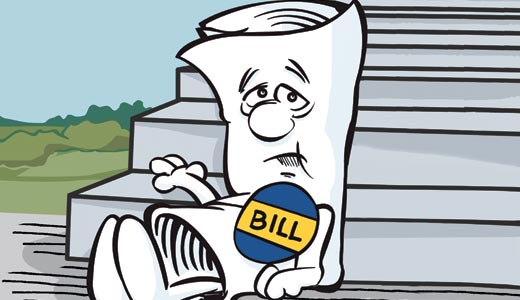 Nearly 200 bills were signed into law in Kentucky this year. Most took effect June 27, including one stripping the permit requirement for concealed carry. But others, the three anti-abortion bills, are either tied up in the court system or haven’t begun to make an impact at all.

Here’s a status report on some of the most talked about bills of the 2019 legislative session.

Attorney Benham Sims used to receive only one or two calls a month from people asking how to get their criminal record expunged. But his phone has been ringing five to 10 times a day since a bill passed in March that expands the number of Class D felonies eligible for expungement. The Kentucky Administrative Office of the Courts could not estimate how many more Kentuckians are now eligible for expungement underneath the new law, but Sims said that it’s in the tens of thousands.

“We’ve done the most stupid thing possible: In trying to punish people, we make it impossible for them to have a job,” Sims said.

Expungement helps people get jobs, which has been shown to reduce recidivism. But even with the new law, there’s still a problem. Not everyone who is eligible for expungement takes advantage of it. Sims said that this is because not enough people know about changes in the law. New expungement clinics could help this, Sims said. They’re being hosted, mostly in Louisville, by the Louisville Urban League and Goodwill Industries.

A new law allows Kentuckians to carry a concealed weapon without a permit, undergoing a background check, paying a $60 fee or taking a training class.

That has not been good for Terry Powers; he had to cancel his second concealed carry training class in three years because just one person had signed up with T. Powers CCDW Training, LLC. Previously, Powers taught eight to 10 people a month.

Advocates of the bill testified before the General Assembly that concealed carry requirements had unduly burdened Kentuckians, particularly minorities, who wanted to flex their constitutional right of owning a gun. Powers disagrees.

“I think this is the worst thing that they’ve done in years,” Powers said. “If they’re not going to require training then why do you require 16 year old kids to have training to drive a car?”

Powers’ worst fear is that “good people” will end up in jail, because they won’t know Kentucky’s gun laws.

Powers hopes that customers will come back as people realize they still need permits to carry a concealed weapon in all of the states surrounding Kentucky besides Illinois, which has never accepted the state’s permits.

NEW ABORTION LAWS UP TO COURTS

“Kentucky Just Banned Abortion,” declared the American Civil Liberties Union in a blog post during this year’s session. Lawmakers passed three bills that restricted abortion access in some form, none of which look like they’ll take effect soon.

The first, House Bill 5, restricts abortions for women who are seeking one based on the fetus’ sex, race, disability, color or national origin. Sponsors presented the legislation as an anti-discrimination bill. It was set to take effect as soon as Gov. Matt Bevin signed it, but the ACLU filed a lawsuit on behalf of EMW Women’s Surgical Center against the measure the day it was passed. A judge blocked the law along with Senate Bill 9, which would ban abortions after a fetal heartbeat is detected, around six weeks — before women might know they’re pregnant.

The last bill, House Bill 148, would enforce an all-out ban on abortion in Kentucky should the U.S. Supreme Court reverse Roe v. Wade — a so called “trigger law.” As the court has become progressively more conservative, hope that the justices will ban abortion has grown. The ACLU hasn’t challenged the law — yet.

The Kentucky Pregnant Workers Act (SB 18): Employers must make  “reasonable accommodations” for pregnant employees, which may include a modified work schedule, time off after childbirth, longer breaks and more. They must also inform employees of these rights.

Animal Sexual Assault (SB 67): Makes bestiality a crime (which somehow was not illegal before, but… Kentucky).

Midwives (SB 84): Creates a certification requirement for home-birth midwives. Creates an advisory council to recommend regulations to the Kentucky Board of Nursing.

The Keep Americans Working Act of 2019 (HB 118): Prohibits occupational licences from being suspended or revoked due to unpaid student loan debt or work-conditional scholarships.

Campus Free Speech (HB 254): Requires public universities to adopt policies affirming that the school protects the constitutional right of freedom of expression for students and faculty, no matter who disagrees with it or finds it offensive. It expands the “free speech zones” at some colleges to any accessible, open, outdoor area. •