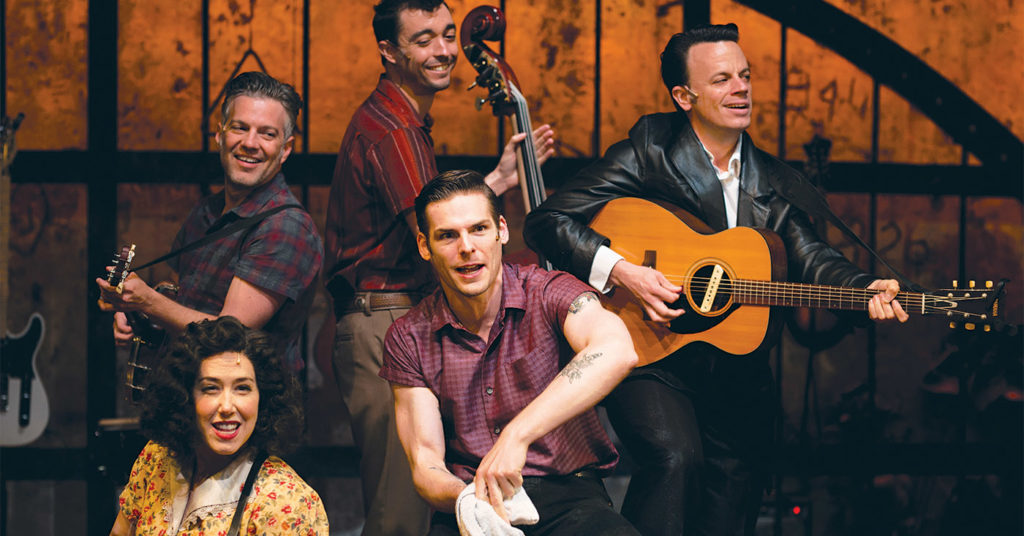 There’s a fine bit of musical storytelling in the second half of “Ring of Fire: The Music of Johnny Cash,” the jukebox musical by Richard Maltby Jr. that opened last week at Actors Theatre of Louisville.

As Cash sings the classic road song, “I’ve Been Everywhere,” his life spins into amphetamine-fueled chaos and a collapse that yields on a weary, haunted rendition of Kris Kristofferson’s “Sunday Mornin’ Coming Down.”

This production offers a few such taut moments. But mostly it roughs out a broad-brush chronology of Cash’s life and career by chaining together three dozen songs. These are great songs, of course, and they take us from Cash’s youth in Arkansas through the Sun Sessions with Sam Phillips in Memphis, his rise to stardom and the Grand Ole Opry, his romance with June Carter Cash and beyond.

It’s notable that Maltby (and William Meade who is credited as having “conceived” the idea), offer a tightly fenced narrative that elides crucial aspects of Cash’s life and career. He was a generous, wide-ranging artist who transcended boundaries and championed a wide range of artists and causes. But you won’t see much evidence of that here. For instance, when Cash sings “Sunday Mornin’” there’s no mention of songwriter Kristofferson. Indeed, apart from Cash’s immediate circle and Sam Phillips, this Cash exists in a strangely isolated universe.

Short intros to his musical manifesto “Man In Black” and “Folsom Prison Blues” make general mention of compassionate social views. But Cash took a sustained interest in racial justice and Native American rights. He recorded an entire album on Native American topics (Bitter Tears). And at his White House debut (at the invitation of Richard Nixon), instead of Nixon’s request, “Okie From Muskogee,” he sang he sang Peter La Farge’s controversial song about a Native American veteran, “The Ballad of Ira Hayes.”

None of that gets a mention in this risk-averse celebration of the music. Still, it offers a fine survey of Cash’s repertoire. And the casting and performances (under the direction of Dan Kazemi) are excellent. The five performers act, sing, play (multiple instruments) and dance with flare and confidence — no matter whether the moment calls for comic shtick, sweet sentiment or sheer musical entertainment.

Of the four men, Craig McEldowney and Corbin Mayer do an excellent job of capturing Cash’s physicality and distinctive vocal production. And each captures different facets of Cash’s persona. McEldowney channels the performer’s fearless presence, his distinctive stance and chiseled expression. Mayer, too, has a fine low register and conveys Cash’s tender passions.

All four men, at one time or another, cover an aspect of Cash’s life and work. Brian Russell Carey brings a dark resignation to his version of the chilling murder ballad “Delia’s Gone.” Paul Wyatt (who sometimes wields a mean Telecaster) shines in the role of Phillips.

And the only woman in the cast, Alex Keiper, does a phenomenal job in myriad contexts (and costumes). She’s a blast in witty versions of “Five Feet High and Rising” and “Flushed from the Bathroom of Your Heart,” brings enormous energy to the classic “Jackson,” and soars in the poignant “Waiting on the Far Side Banks of Jordan.” ATL’s strong production standards are well-employed in the Victor Jory Theatre. Scenic Design, Michelle Lilly; Costumes, Alexander B. Tecoma; Lighting, Aimee Hanyzewski; Sound, Barry G. Funderburg; and very effective choreography by Stephanie Card.

Plenty Of Time To Get Thee To A Ky Shakes Show

The other night, I was seated low on the left side of the C. Douglas Ramey Amphitheatre in Central Park for a performance of Kentucky Shakespeare’s bluegrass-infused adaptation of “As You Like It.” This is a production that is really putting the “Kentucky” into Kentucky Shakespeare by setting the play in 19th century Kentucky and setting Shakespeare’s song lyrics to music penned by Louisville songwriter Aaron Bibelhauser.

In one scene, a banjo-playing jester named Touchstone (Gregory Maupin) enters from the corner of the stage, wearily carrying a woman in disguise named Celia (Amber Avant) and accompanied by a woman disguised as a man (the character Rosalind, played by Hallie Dizdarevic).

When they entered, I heard a disturbance and turned to my right. From where I sat, I could see most of the 1,700 people in attendance. Every eye was looking at this comic spectacle. And every face was smiling.

If you weren’t there, you should have been.

Under the leadership of Producing Artistic Director Matt Wallace and Associate Artistic Director Amy Attaway this excellent acting company with a highly stable membership proves night after night that Shakespeare’s works are meant to be played in front of people, not just studied in classrooms.

“As You Like It” is a brilliant, gender-bending tribute to women’s intelligence, agency,power and wit. If you haven’t seen Dizdarevic, Avant, Jennifer Pennington, Abigail Bailey Maupin and Angelica Santiago (as Phebe, in a vexed romantic pairing with Silvius, played wonderfully by Crystian Wiltshire), you’re missing out on one of the most delicious treats of the summer.

J. Barrett Cooper plays Sir John Falstaff this summer in a play that many think should be named Falstaff rather than “Henry IV, Part 2). Falstaff is one of the greatest roles ever written and Cooper’s performance is a superb mix of lusty appetites, wistful regrets — and sudden turns of fortune. In this play, you can see Monte Priddy as Shallow (one of the Shakespeare’s great inventions). Priddy has been a vital member of Kentucky Shakespeare since 1961 and has played some 90 roles over those years.

Of course, the women in “King Lear,” Cordelia (Avant), Goneril (Abigail Bailey Maupin) and Regan (Dizdarevic) are players in one of Shakespeare’s most profound tragedies (with Jon Huffman in the title role). But the tragedy also highlights the virtues of nobility and loyalty under duress.

This week you have a few more chances to see these gems. Then the season wraps up with productions by The Globe Players (a high school troupe), Cincinnati Shakespeare and the Louisville Ballet. •