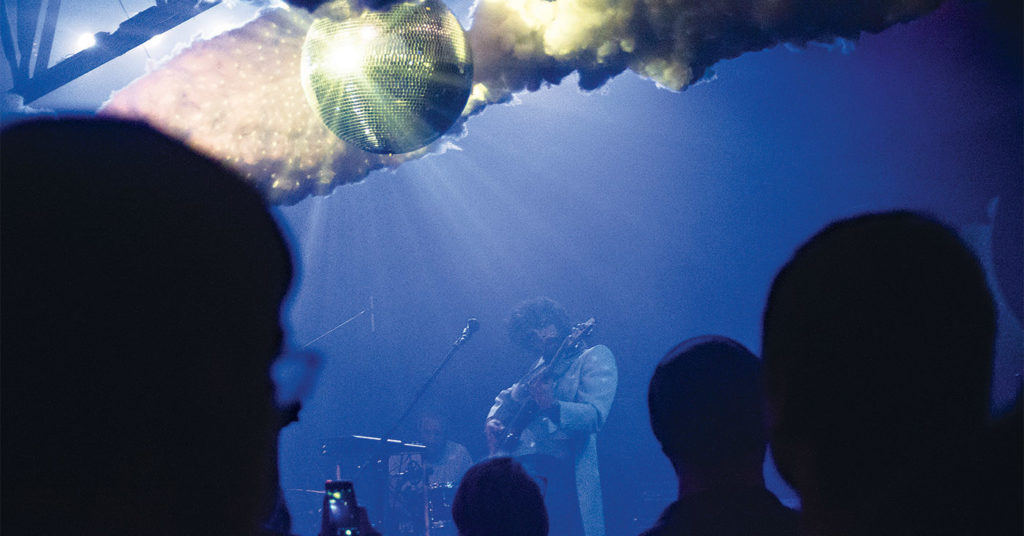 “Turn that noise down!” is a phrase often used by weary parents about their teenager’s musical taste. What happens when a bar featuring live music gets a similar noise complaint from neighbors? Two weeks ago, on May 18, the hip, mid-century-style bar and music venue Odeon said repeated noise complaints led it to shut down a show early and decide to host only “unplugged” concerts moving forward.

The music lineup for that evening included local bands Isolation Tank Ensemble, Blind Scryer and Waxeater. The sound is somewhere in the realm of experimental to heavy metal, which by definition is loud music. The bass player for Waxeater, Elliott Turton, said the band took the stage at 10:30 p.m., when “Louisville punk shows start, not end,” and everything was going smoothly until their final song.

“That’s when I saw a shadowy figure run down the hallway, along the back wall and into the sound booth,” Turton said. “Then, the lights came on and a hearty ‘you’re done’ was shouted from the back of the room.”

Turton and the guitarist, Rob Montage, later talked with Odeon’s manager, who he said apologized for ending the show. The manager told them that a neighbor’s complaints had led to problems with city Alcoholic Beverage Control officials, which threatened the bar’s liquor license.

On May 19, Odeon posted on their Facebook page: “Last weekends [sic] show was too loud for our building to contain. We’ve never had a show that loud before. And you could hear it from across the street. Not what we want for our neighbors.”

The booking manager and the sound tech were fired, according to both individuals, and they each declined to comment further.

The Louisville-Jefferson County Metro Government noise ordinance defines a violation as: “Unreasonably loud, harsh, or excessive noise. Any manufactured noise plainly audible at a distance of 50 feet from its point of origination or emanation.”

Odeon has had at least two citations for noise.

Robert Kirchdorfer, director of Codes and Regulations, told LEO: “Any violations of the same offense after the first two could result in suspension or revocation, or possibly non-renewal.”

Inspectors for Alcoholic Beverage Control, or ABC, are generally responsible for responding to calls about noise from bars and other establishments with liquor licenses, although the police can issue the same citations.

The Old Louisville neighborhood bar Magnolia Bar — colloquially known as “Mag Bar” — has had issues with noise complaints, and, according to their manager Steve Fitzgerald, it has “resulted in quite expensive fines.”

The bar spent about $6,000 on sound-insulating tiles, window treatments, backyard fencing and sound baffling to keep the sound inside the venue, he said.

Mag Bar ran into problems with neighbors about a year and a half ago when a vacant property was renovated and became residential.

“We worked with the landlord and tenants on a plan to satisfy their concerns,” Fitzgerald said.

In addition to soundproofing and backyard fencing, the bar agreed to end live music Sunday through Thursday at 11 p.m. and to end all live music Friday and Saturday at 1 a.m., he said.

If the neighbors felt the sound was unreasonable, they agreed to call the bar immediately as opposed to calling in a complaint, said Fitzgerald, who promised, in return: “Our staff will immediately try and mitigate the sound or shut down the show.”

“We have worked with our neighbors to give them a great place to hang out as well to not try to be too intrusive,” he said.

If noise complaints are made, the bands will undoubtedly feel the impact.

After a three-year hiatus, pop-rock band Twenty First Century Fox was set to debut its album New Energy at Odeon on May 25.

But Odeon, citing the noise problem, said the venue would go “unplugged,” a policy that was announced in a Facebook post on May 23: “Think MTV Unplugged… everything mic’d and going through the house PA still. We will be using a [decibel] meter to watch levels. If a band has doubts that they can perform their set this way, they should choose another venue.”

When Twenty First Century Fox heard that, they checked with Odeon about the status of their show. “They responded saying that there had been some personnel changes at the venue, and that going forward they would implement a noise policy,” Twenty First Century Fox said in a statement to LEO. “Given that it was not what we had initially agreed to, we felt it was best to cancel our hold at the venue and try to find another location for the show.”

Other bands that were scheduled for upcoming shows have also relocated, including Louisville rock band Quiet Hollers, who were set to end their tour at Odeon on June 15.

Lead singer Shadwick Wilde said that Odeon canceled a co-hosted Facebook event page, has not explained what happened and would not transfer ticket sales.

“To me, it seems like they’re acting out of spite,” Wilde said. “There’s a right way and wrong way to handle these kinds of challenges, and the folks at Odeon don’t seem to care who is impacted by their choices. We’ve been able to keep the date and move the show to Gravely Brewing, which was very lucky for us. I’m very disappointed by how this has all played out. I’m just hoping we can still have a good show and make some people happy.” •