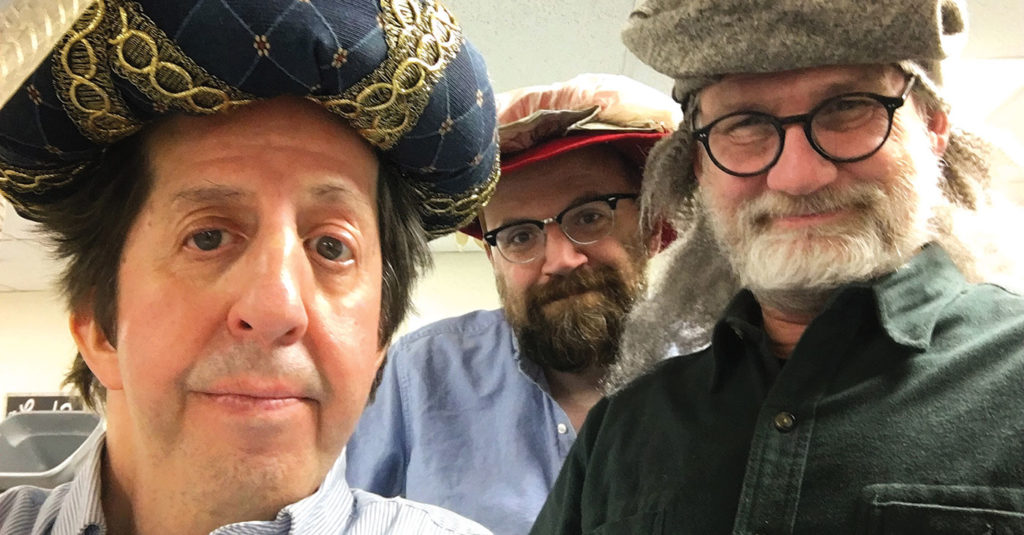 Starting this weekend, Louisville Improvisors will shake up Shakespeare with its “Late Night Shakes” series. Louisville Improvisors are partnering with Kentucky Shakespeare for one-of-a-kind comedy shows. After select Shakespeare in the Park performances, improviser extraordinaire Chris Anger and company will take the stage for Shakespeare-themed improv shows. This weekend, the troupe goes on after “Henry IV, Part 2,” and then “The Tragedy of King Lear” on July 6 and “As You Like It” on July 20. Anger took a few minutes to chat with us about this very special series of shows.

LEO: How did this start?
Chris Anger: We’ve done Shakespeare themed stuff in our shows for years. We were in the park doing ‘King Lear’ for Savage Rose [Classical Theatre Company]. One of our guys, Alec Volz, was directing it, and I was in it. We just said, ‘Hey, you all need to do some improvised Shakespeare.’ They thought about it and said, ‘Yeah.’ We came up with ‘Late Night Shakes’ the very next year. It’s probably one of our favorite shows to do. That stage is great to perform on, and we get to raid their costume department. We grab a few puffy shirts, a bunch of hats and away we go.

Does knowing that the theme has to be Shakespeare make improv harder?
Not really. We do comedy by pretending we’re not being funny. If you try to be funny, it will be awful. If you just stay in the moment, the comedy will come. And the audience just sat through a two-hour, very structured Shakespeare play. They’re ready for something a little loose. We come out and take a few suggestions as to what the title of our play should be. From there, it’s just a good time. We play with Shakespeare’s parameters, tropes and language.

As an actor, what has Shakespeare meant to you?
The other guys, Alec and Brian [Hinds], are much more versed in Shakespeare than I am. I had never done it until they asked me to play The Fool in ‘King Lear.’ I’m basically a high school dropout. I’d never read any Shakespeare. Once I agreed to do that show, it became one of the best experiences of my life, because it forced me to read Shakespeare. I realized that what’s in agreement to what we do and Shakespeare is that everything is about the relationships. There’s always the story, but the key is the relationship between people and their behavior.

Is improvising an entire show or Shakespeare’s dialogue more difficult?
The language, by far. I’ve been doing improv so long I don’t even think about it, really. But I do love the language. The thing I didn’t get, when I was reading Shakespeare in high school, is that he’s funny. Really funny. Some of it is dirty. Some of it is insulting. And I’m not a Shakespeare scholar by any means, but when I read it now I can pick up those subtle nuances.

How do you come down on the Shakespeare might-not-have-existed discussion?
I believe he did. Yeah, why not? I haven’t done a lot of research into it, but I believe he existed and wrote the plays. There are conspiracy theories about everything. I will say, I do not believe Lee Harvey Oswald acted alone. But Shakespeare? Sure.

In regards to Shakespeare’s work being universal, what play do you think best reflects us now?
Wow, that is an excellent question that you should ask somebody else. [Laughs] If you’re talking generally, fuck plays — we’re living ‘Dr. Strangelove.’ That’s my final answer. We’re all toast. •