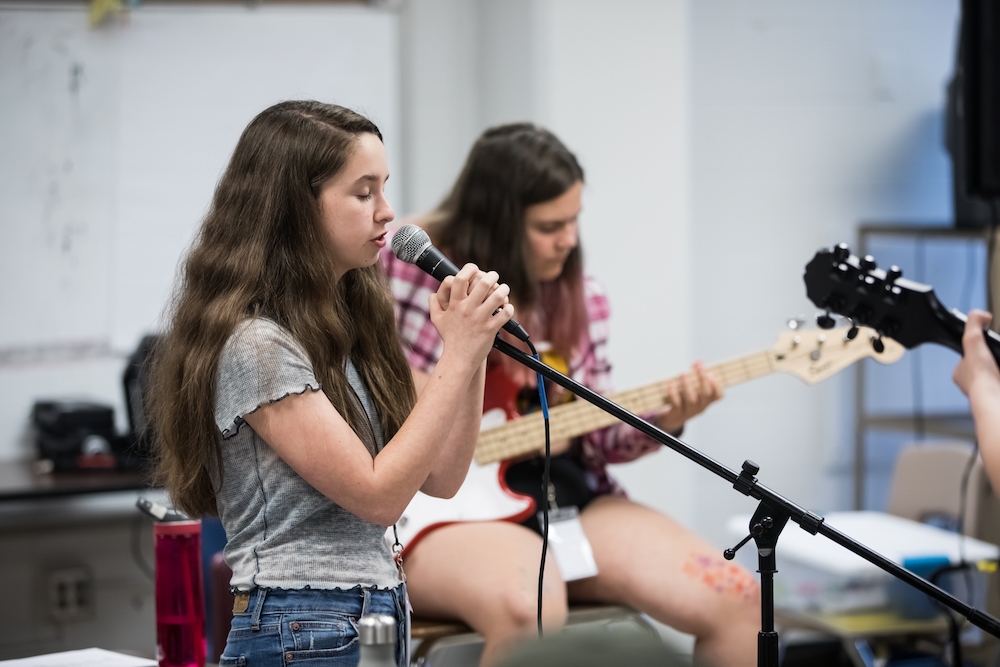 The idea sounds almost impossible – taking groups of 10- to 18-year-old kids, teaching them to play electric guitars, basses and drums and having them create new bands and write their own original songs in just one week. But that’s exactly what Girls Rock Louisville has been doing since 2016, and with three studio albums and live performances in the books, the camp seems to have it down to a science.

Girls Rock welcomes young women, trans and gender-nonconforming youth to an immersive week of musical instruction and band practice. This year’s took place at Meyzeek Middle School, and even along the cinderblock walls and blue lockers, the camp still added its signature musical and feminist message. Posters dotted the hallways with slogans such as “emPOWered” or “Don’t Worry Be Yoncé,” and rooms were named after famous women musicians ranging in genres from Ella Fitzgerald to Alicia Keys. Upstairs, sounds of drums and basses overtook their practice rooms and clashed in the concourse, but the camp is about more than just rock ’n’ roll — it is also a space where campers can be whomever they want to be.

“A lot of what we do here beyond music is about getting them to believe in themselves, getting them to support and trust one another and trust the community,” said Carrie Neumayer, Girls Rock Louisville’s founder and executive director. “As the week goes along you see them owning their own space and having their voice heard.”

When not in band practice or instrument instruction, the kids were learning about women of color in comics and designing their own superheroes, attending a lecture on the history of women in rock or perhaps just flopping on a beanbag in the self-care room. The annual camp has not only kept kids coming back for more, but volunteers also return.

“We’ve built a community over the course of those years that unites during the summer and welcomes new [people], “ said Diane Pecknold, who has volunteered with Girls Rock since it was a two-day workshop between 2014-2015.

This year’s camp had the highest number of participants ever, with around 50 kids forming 10 bands, and LEO sat down with members of each group before their showcase tonight at Art Sanuaury, which takes places at 5:30 p.m. and costs you $5. Some of the campers did not want to be identified for this story and some used nicknames or first names.

When LEO popped in on the Quiet Kids, they were anything but quiet. The campers seemed totally at ease with their instruments, and the soft vocals of the lead singer melted into their sound. Together for just three days, the band looked and sounded like they had been working together for years. Their song, “Lab Rat,” is a resounding demand for respect and refusal to be put in a corner. “It’s talking about being used by a friend. It’s saying that I’m not going to be your experiment for your own benefit,” Maggie Statham, the band’s guitarist, said. Statham said working with her bandmates has been “super easy,” but the most challenging part about the camp is feeling ready to perform within the short timespan: “I don’t want to do bad, I put a lot of effort into what I work on artistically… I’ve never performed something within four days.” But the rapid pace of the camp hasn’t stopped Statham from loving it. For future campers, she left some words of advice: “Be ambitious and vicious.”

Siren Fins found their name from the aquatic centerpiece of their practice room — a fish tank. But the song they’ll be singing tonight diverges from their underwater inspiration into seemingly complex themes. “We’re writing about how media wants us to be a certain way, but we’re not,” Izzy Whitaker, the group’s guitarist, said. The band, also composed of a bassist, singer, drummer and two keyboardists, wants their song to be an anthem. Whitaker, adorned in a crochet hat that looked like a fox and a button reading “music is my hiding place,” grew up in a musical family, learning to love rock musicians when their dad would take the aux cord and play his favorite music. And, at only 11 years old, musical references and terms seem to roll off Whitaker’s tongue when describing Siren Fins: “Our band kind of sounds like Jimmy Eat World with Pink Floyd synthesizers, very Joan Jett vibe around it all.”

“We all just kind of liked the name peach, and peach soda sounds really yummy,” said Ellie Luken, describing how the newly-formed band found its title. Still, in the early phase of the songwriting process, Luken said, the band is going for a style along the lines of “Pumped Up Kicks,” the 2010 hit from Foster the People. In the practice room, the bandmates were jamming individually before harmonizing together. Luken, in what seems like a grey fox version of Whitaker’s crochet hat, is playing the keyboard this year, even though she usually sticks to bass and drums. But, that’s the beauty of Girls Rock’s structure — campers at any level can learn any of the instruments in just a one-week timeframe.

This band is composed of the camp’s interns, previous participants whose current roles are a blend of being volunteers and campers. From running the camp’s social media to leading workshops for the 50 kids, they’ve been busy this week even outside of the practice room. On Wednesday, they were breaking in their newly-decided band name. The name comes from a brainstorm session of words they like, where they immediately combined city and youth, while thinking about the reality of being broke. Broke City Youth had a relaxed practice session with volunteers occasionally popping in and out. Greta Reel, the band’s guitarist, has been playing the instrument for about six years, and now at 17-years-old, she said that being around so many talented women guitarists this week has been inspiring. “I subscribe to so many guitar magazines, and I always get so tired of seeing men,” Reel said. “I went to this camp, and it felt so awesome to be a part of a huge group of women musicians. I think it’s just a really great thing going on in Louisville.”

Ghost Boy’s song “Life on the Moon” builds on the lore of a ghost that supposedly haunts Meyzeek Middle School, the setting of this week’s camp. Aaron, the vocalist, recalled one of her bandmates hearing a rumor about ghost that lives in a closet. “So we made it about a gay ghost,” she said. The song — part tragic, part uplifting — tells the story of a kid who was not accepted by his parents and eventually dies in a closet after being forgotten. But in ghost form, he meets someone new. “Basically, he falls in love or becomes friends with this other person who helps him move on,” Aaron said. They’re still ironing out the lyrics, but Ghost Boy wants to get out the message that you can always find acceptance somewhere. “Someone is always going to be there for you,” Aaron said. In addition to singing live, Aaron is also looking forward to putting on an entire performance — from hair to makeup. She plans on painting half of her face like a ghost and wearing a white wig and cape at Art Sanctuary this weekend.

Partial Eclipse draws inspiration from the Cosmos with their song “Orbital Journey.” But the songs’ themes will go beyond galaxies and planets. “Our song is about growing up and stuff,” Lily Lyles, the group’s vocalist, said. “When you’re an adult you get to be more independent, but it’s harder, and you have to make your own choices.” Lyles, who found out about the camp through family friends and a documentary, said she feels a little nervous about the live performance coming up, but knows that her bandmates and other campers also feel similarly, and will be there for each other. “We’re all doing this, it’s a shared experience.”

This band’s name came from a mix of reptile curiosities, etymology and wordplay. The band’s keyboardist, Isabella Wilcox, loves snakes and another member found out the Latin word for snake is anguis. Adding an “h” at the end, the band landed at the word anguish. “Then we added angels — it just sounds nice. We liked it,” Wilcox said. Cautious about revealing too much about their upcoming song, almost as if they had a PR agent alongside them with the job of keeping their new single under wraps, the band said listeners can expect a song about toughness. But that’s about all they would let drop. “Our song is kind of a secret,” Wilcox said. The group’s logo almost looked professionally designed, showing two well-drawn cobras that diverge over a sharp font spelling out “Angels of Anguish.” Wilcox said Friday is about performing well, but also just having a good time. “[I’m looking forward to] being with our friends on stage, knowing that our song doesn’t have to be perfect — we can have fun.”

Riot of the Crimson Goat

Riot of the Crimson Goat found its name in a relatively straightforward way — a Google band name generator. “I would say it’s a pretty cool name,” Sophia M.C., the 12-year-old vocalist, said. And seeming to follow in the footsteps of many other Girls Rock bands, Riot of the Crimson Goat’s song deals with some mature themes despite the youth of the performers. One of the band coaches said they started out the week with a roundtable discussion of ideas for a song, covering topics from prejudice to capital punishment. While still workshopping a song title on Wednesday, the band is planning to weave in commentary on social injustice throughout the song.

Rotten Rainbow’s song, untitled as of Wednesday, is all about rejecting offensive comments and telling someone to be quiet. “We don’t really care what you’re saying — you’re offending us,” Iris McDonley, the band’s bassist said. They had toyed around with some potential titles like “Shut up and Relax,” but the band was still keeping their options open. The band’s name plays with contrast. “It represents how you can see beauty in bad things,” the group’s drummer said. Now, in her third year doing this camp, she feels confident on the drums and even when performing live: “Drums are a really good outlet to get everything out… it’s really good to relieve yourself if you’re feeling stressed out.” The bandmates gave each other relaxed constructive criticism on lyric ideas and playing tips. The bassist said she all-around loves Girls Rock: “It’s just fun. I love making everything — the song, the logo and the band.”

This band found its name when having a conversation that wasn’t even about band names. “If I’m really mean,” the vocalist told her bandmates one day, “just blame it on my sign.” When one of the members jokingly suggested that as a band name, someone quickly hopped up with a marker and wrote it on the idea list, and it stuck. With a chorus already completed, their song is about self-worth and fitting in, but they also want to leave it open to listeners to interpret it however they like. Blame It on My Sign will be the first to admit that they’ve had their ups and downs but seem to be finding their groove ahead of the live performance. “I have horrible stage fright,” one member, 15-years-old, admitted. “The energy when you’re performing it on stage is completely different.” But surrounded by her bandmates, she knows it won’t be as bad as she might think. “I trust all of them and I know on stage I won’t be as nervous,” she said. “The band gets along in such a way that it makes everything easier.”