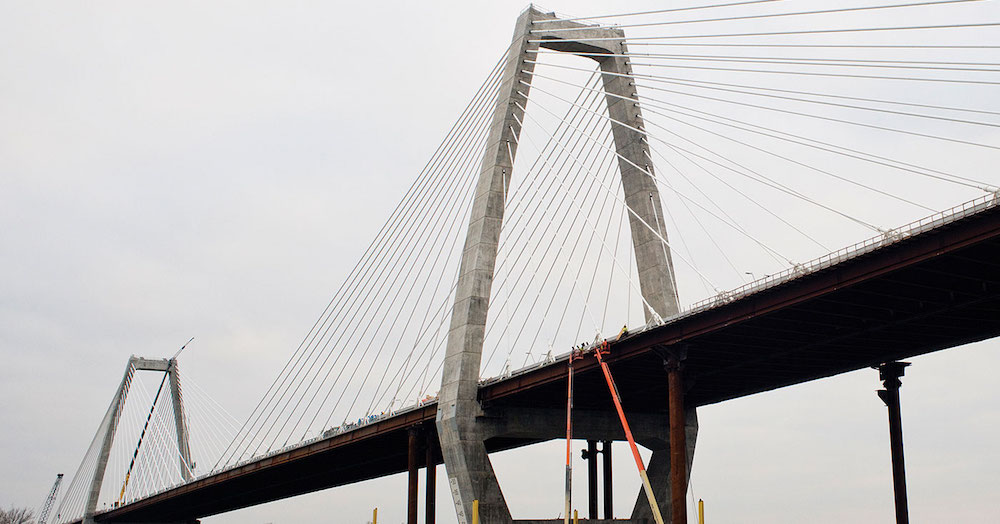 This is a part of a package of articles on the future of transportation in Louisville. For more, click here.

I was a steadfast critic of the project to build two bridges across the Ohio River in Louisville for a decade. In fact, my first critical post on the bridges proposal was put up in 2007 less than six months after starting my original Urbanophile blog.

But the end result was even worse than I anticipated. The project has proven to be a money waster of the highest order and, I assert, the biggest American transportation boondoggle I can identify in the 21st century so far.

Part of the agreement between Indiana and Kentucky to build the bridges was that they would do official before and after surveys of traffic to determine the impact of the new bridges on traffic flow. The study was published in August of last year.

The two states spent $1.3 billion to build a parallel Interstate 65 span in downtown Louisville that doubled the capacity of that crossing. After spending that money, traffic fell by 50%.

Let me repeat that: Indiana and Kentucky spent $1.3 billion to double the capacity of a road while traffic levels were cut in half.

Below is a chart showing the before and after traffic levels on the bridges. 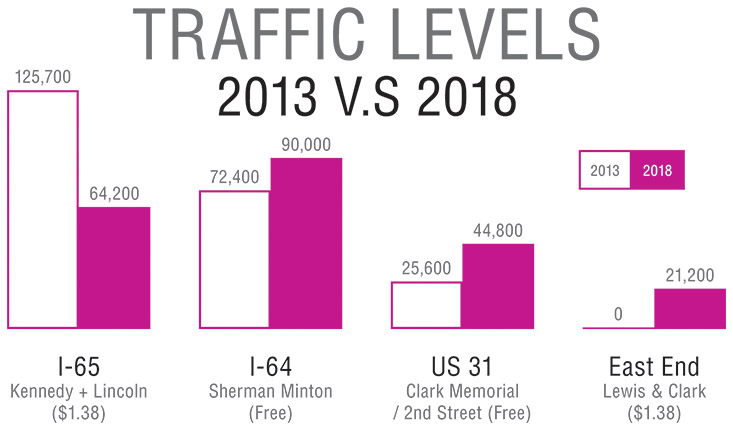 The project doubled the size of the I-65 crossing and built an East End crossing. Each of these was around $1.3 billion separately.

What happened is that to pay for (part of) the bridges, a toll was added to the previously free I-65, and the new crossing in the East End was also tolled. The result is that total cross-river traffic has actually fallen since 2013, albeit only slightly. But the tolls led to a huge diversion of traffic to the other two bridges that didn’t have tolls. In fact, the existing free I-64 Sherman Minton Bridge now carries more traffic than all of the toll bridges combined.

Traffic on the Clark Memorial (Second Street) Bridge is up 75%. This is traffic choosing the free route to get to downtown. This happened even though the Clark Bridge has seen its number of lanes cut in half due to a lengthy repainting project. Traffic on the I-64 bridge increased by 23%. (There’s no percentage change on the East End Bridge since it didn’t previously exist).

The East End Bridge made sense because it added a crossing where one did not exist previously and where traffic would otherwise have to go many miles out of the way to get across the river. It also helped open up a huge land area for industrial development. The actual bridge was too expensive, because of a ludicrous tunnel built on the Kentucky side, but at least the basic bridge was a sound project.

But an expanded downtown crossing never made sense. Not only has it proven to be a transportation waste, it is a negative in other ways. For example, the project doubled the width of interstate overpasses through downtown Louisville, creating a bigger barrier between downtown and the booming NuLu district to the east.

Most galling, transportation officials decided to double down on freeways at a time when most cities are looking at ways to reduce the negative impact of freeways on downtowns and even tear them out entirely in some cases. An extremely viable proposal to do just that in Louisville called 8664 was rejected by policymakers, who insisted on spending $1.3 billion on this unnecessary project that actually increased the harm done by freeways to downtown.

Not only was the bridges project a colossal waste of $1.3 billion. Not only did it harm the urban fabric of downtown Louisville. But there’s also reason to believe it diverted economic activity away from Louisville. 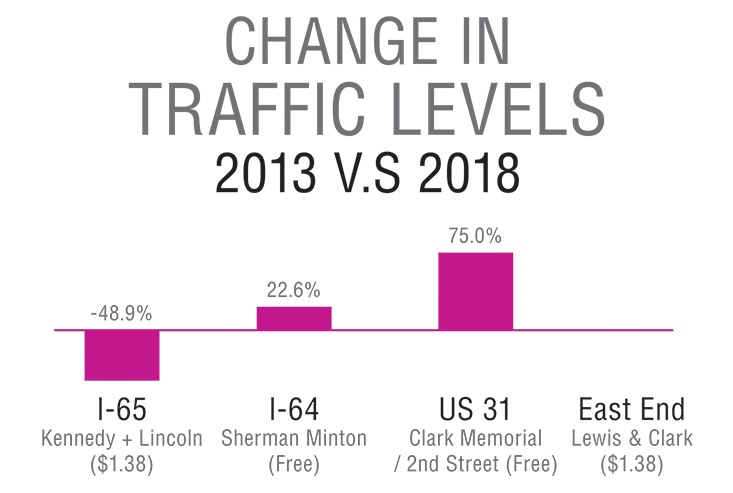 This chart shows truck traffic across the river has fallen by almost a third since 2013.

Twenty percent of the 224,700 total traffic in 2013 is 44,940 trucks. Fourteen percent of 220,200 total in 2018 is 30,828 trucks. That’s 14,112 trucks (i.e., commercial traffic) gone. Where did they go? If you are a region that’s banking on the distribution industry for a big part of your future, blue collar employment growth, the tolls on these bridges can’t be good news. That’s particularly true when no surrounding competitor city has tolls.

My critical analysis of this bridge project was known to decision makers well in advance of the project moving forward. The 8664 idea was likewise widely circulated and understood by everyone in Louisville leadership.

This boondoggle didn’t happen by accident. It wasn’t a result of ignorance. It was well known in advance that it was a bad idea. It was a deliberate, conscious choice by previous leaders in Kentucky and Indiana. (Mayor Greg Fischer, it should be noted, did not take office until the project was too far advanced to have realistically been canceled. He just had to live with it).

The fact that these states found $1.3 billion to spend on this downtown bridge is one reason why I will never accept the “there’s no money for that” excuse on anything again. States keep finding plenty of money to spend on things of little to no value — like this bridges project.

I’m not hostile to road spending, so my opposition to this project was never based on an ideological opposition to cars but because it made no transportation or financial sense. It doesn’t make sense to build new roads in stagnant or shrinking places, and we should be cautious about speculative projects in an age where we don’t know what the pending possible disruption of driverless cars might bring, but I’m a big advocate of building more roads in rapidly growing places. Unfortunately, the project selection process in most states seems to alight upon the worst projects while the best go unfunded.

Is there another place in the country where $1.3 billion was spent to double the capacity of a road whose traffic then fell by half? I can’t think of another example remotely like this. The downtown bridge is a total waste. That’s why the Louisville downtown bridge is the biggest transportation boondoggle of the 21st century to date.

For the record, this is something that did not have to happen. •

Aaron M. Renn is a senior fellow at the Manhattan Institute. He can be reached at [email protected]