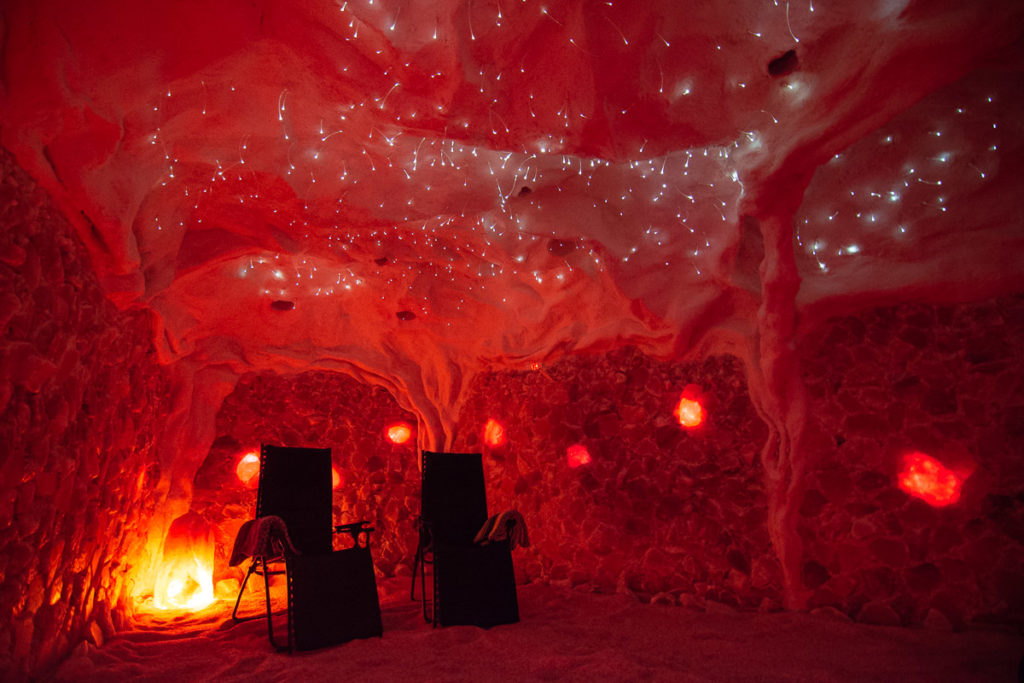 Let’s get right to one of the most frequently asked question about the Louisville Salt Cave, an alternative wellness center that claims its therapy has mental and physical health benefits: No, it’s not a natural cave. There are caves under Louisville, but this is a small, man-made cave inside of a strip mall, and it is packed with pink Himalayan salt.

“There’s about five tons of it in this space, and it averages around 250 million years old,” owner Nicole Bartlett explained.

When Louisville Salt Cave opened in 2015, Bartlett said, there were not many of these artificial caves in the United States to use as a model. So, Bartlett found a cave builder out of Vermont to create what she wanted inside of the strip mall just east of the intersection Hurstbourne and Shelbyville roads.

“There is a lot of sensitivities when working with salt in an enclosed environment that we weren’t aware of, so we relied on the person, who was an expert in it,” Bartlett said.

While some in the medical community feel that it’s pseudoscience, others say that halotherapy has positive health benefits.

“When fine salt particles are inhaled, they will fall on the airway linings and draw water into the airway, thinning the mucus and making it easier to raise, thus making people feel better,” Dr. Norman Edelman, senior scientific advisor to the American Lung Association, said in a piece on the Association’s website. “Also, these environments are allergen-free and thus good for people with allergies affecting their lungs.”

On a recent visit, I was greeted by Urith Smith, the “resident crystal guru,” and then by Bartlett. The sessions start on the hour every hour so just before 11 a.m. I was given a small tour of the cave. The entire cave, including the floor, is covered in salt. It’s a surreal experience to walk into for the first time and see a ceiling that is made of swirls and soft contours formed by the chunks of salt. The floor is thick layer of finer salt that absorbs your footsteps as you walk to your zero-gravity chair. Normally, the cave will have six zero-gravity chairs with blankets positioned inside the pink/orange room.

As I sat in my chair in the dim, 68-degree room, several orbs were glowing in the walls, which I learned were to increase melatonin levels in the body to help relax. Right before the session began, Bartlett explained that machines were grinding salt into fine particles that you breathe in, which she said helps the detoxification process. She left the room, and I looked at the small lights hanging from the ceiling, before I closed my eyes and began the guided meditation. For about 30 minutes  of guided meditation, a voice guided me toward letting go of weights and pressures. I am admittedly a terrible student of meditation, but I focused on my breathing, making sure I took deep breaths  to absorb as much of the salt as possible. Once the voice was done with the guidance, I was told to open my eyes and to absorb my surroundings.This brought on sensations similar to a calmly rocking boat.

Before visiting, my back was tight from working 12 hours the day before, and after my visit to the salt cave, it was not. I remember sitting up and feeling a pleasant, but foreign nothingness that I had not felt before. I suppose that is what being relaxed actually feels like. This feeling of calm lasted the rest of the day and into the next, but what was more defining of the experience was that as I am typing this article two weeks later, I feel more systemic changes. I have always been a terrible sleeper, and I have maintained a more consistent schedule the last two weeks. My allergies are almost nonexistent and my skin has definitely felt more healthy. I can’t say that it’s an end-all-be-all cure, but I can say that it’s definitely worth trying.

The Louisville Salt Cave is located at 9800 Shelbyville Rd #200. The 45-minute sessions start at $35. Click here for more info.