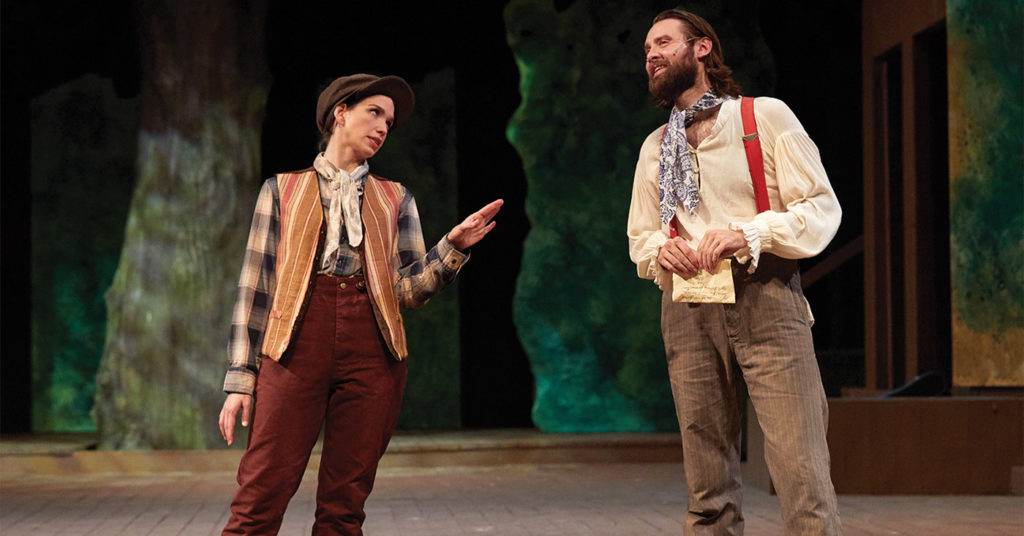 Hallie Dizdarevic and Jon Becraft in Kentucky Shakespeare's ‘As You Like It.’ | Photo by Bill Brymer.

Most funding support for individual artists is intended to recognize and validate an artist’s past work and encourage artists to continue down their chosen paths.

In contrast, the Hadley Creatives project (now in the second year of a planned five-year commitment) is about instigating unpredictable outcomes. This year’s class of Hadley Creatives, which consists of 15 artists — five each from visual, literary and performing disciplines — has embraced that goal and will showcase the results with a series of installations called “Dis/Comfort Zones: a journey into the sensations and politics of being” at Actors Theatre of Louisville from 6 to 9 p.m. Saturday.

The Hadley Creatives are funded by the George & Mary Alice Hadley Endowment Fund at the Community Foundation of Louisville. The project’s goal is to jog artists into blazing new trails, creating new networks that transcend the usual disciplinary boundaries. Especially, its goal is to help artists develop their careers in such a way that — as the Hadley Creatives website puts it — “the term ‘struggling’ is no longer associated with ‘artists.’”

The artists, selected through a competitive process, experience an intense year of retreats, seminars and individual mentoring by local experts and national arts leaders and practitioners. They include New York City’s highly-esteemed Creative Capital (creative-capital.org), which works to help the artists develop their entrepreneurial and strategic skills while also building new interdisciplinary collaborative networks.

Those interdisciplinary collaborations — small teams consisting of, for example, a writer, a choreographer and a visual artist — are the creative impulse driving this weekend’s event, which features a number of interactive, immersive installations.

Hadley participant Keith McGill, whose artistic career is rooted in theater and comedy, said the collaborations were an exciting outcome of the program. He collaborated with visual artists Tatiana Rathke (photographer and collagist) and Gibbs Rounsavall (abstract geometric painter) on an installation that challenges audiences to confront a number of difficult questions.

“The wonderful thing about these collaborations is that it took all of us out of our own comfort zones,” said McGill in a phone interview. “If you put any of us in a room with people from our own medium, we can go all day. But this made us think differently about what we’re doing and how to present it while also learning from the other artists.”

By McGill’s account, the collaborative experience with new partners from other disciplines was by turns scary, exhilarating and, ultimately, inspiring. “It really made me rethink my own discipline,” he said. “When you’re in these collaborations, you really have to own the fact that you’re an artist. That’s one of the valuable things about working with the artists at Creative Capital who’ve been through this process and working with your partners who are going through the same thing. And just discovering all these really creative people in the community opens up new ways to think about making theater.”

Theresa Bautista (dancer/choreographer) collaborated with Andrew Cenci (street and portrait photographer) and Irene Mudd (fiber and mixed media artist). Blending choreography with the visual arts was “definitely challenging,” said Bautista. The team explored various options — and ultimately decided that rather than having Bautista or hired dancers supply the featured movement, instead their design would focus on how the audience moves through the installation.

“We thought a lot about things that were going on in our city,” said Bautista. “We thought about things that were kind of hidden, about the homeless population that was assembling en masse downtown. We talked about redlining in The West End. And we concluded that there are things happening in the city that a person can simply avoid and pretend are not happening. So, we decided to go around the city and take pictures of landscapes and people and the things that make us comfortable and uncomfortable.”

Using those images, they created an installation that explores both public and personal redlining — not just political and economic redlining, but also personal choices to avoid uncomfortable parts of the city. Their project, which transfers photos to canvases of various sizes, requires audiences to move into the space and navigate through barriers to experience the various images.

The annual Kentucky Shakespeare Festival in Central Park opened last weekend with a delightful production of “As You Like It,’ directed by Matt Wallace with text edited by company dramaturg Gregory Maupin.

We may give you a more expansive review when we have more space, just because we want to regale you with our expertise. But the simple fact is that the gender-bending romance is a fast-paced blast and you should make your way to Central Park lickety-split.

Wallace has set the play in Kentucky, circa 1870 — a great decision that works perfectly with the rusticated setting and humor of the play. One of the central episodes in the play involves a droll wrestling match — and a sly slice of Lil’ Abner-style humor just amplifies the fun in the Forest of Arden (a place far-removed in spirit from Kim Davis’ vision of Rowan County).

Wallace brought in award-winning bluegrass singer-songwriter Aaron Bibelhauser (of the band Relic) to pen original music for the show — with great results. Heading up the cast are Hallie Dizdarevic as Rosalind and Jon Becraft as Orlando, with Gregory Maupin as a banjo-wielding touchstone, Abigail Bailey Maupin as a finely honed Jaques, J. Barrett Cooper as Duke Senior, the play’s moral center. And Donna Lawrence-Downs has dressed up a great lineup of Kentucky Shakes veterans and newcomers in some dazzling costumes. •