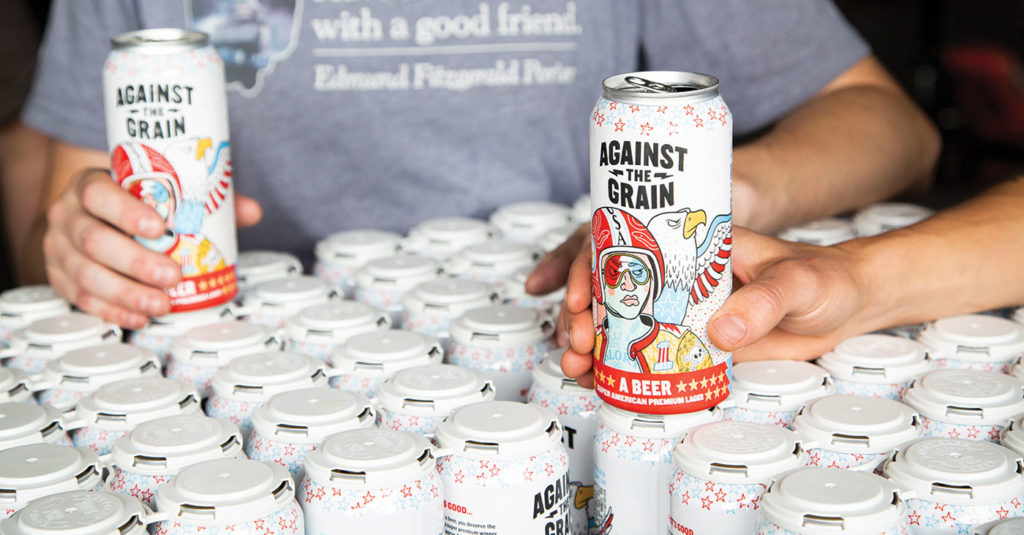 Rest easy beer nerds — reports of Against The Grain’s sell-out have been greatly exaggerated. Rumor in the beer scene was that AtG was bought by a large corporation, “Big Beer,” if you will. That sort of thing has happened with other microbreweries. And if true, that would have made AtG the first Louisville brewery to do so.

What did happen: AtG has entered into a collaboration with Pabst Brewing Co. This means Pabst will support AtG with sales, marketing and distribution of only AtG beer and specifically in Kentucky.

According to AtG, Pabst approached it about the collaboration.

AtG is the second brewery with which Pabst has partnered in such a relationship. Michigan’s New Holland Brewing teamed with Pabst in early 2017 and has since focused on distributing Dragon’s Milk nationwide by leveraging Pabst’s sales and distribution platform.

AtG plans on doing the opposite by keeping its focus local.

“When Against The Grain opened eight years ago, we did something that would be unusual today,” said Molck. “We focused our sales outside of Kentucky because that’s where craft beer was most popular at the time. That’s where demand was.”

At the time of AtG’s opening, craft beer was in its infancy in Kentucky. The company focused its sales in larger cities — and even in Europe — where craft beer was more popular at the time. Now that craft has grown in Kentucky, AtG wants to reintroduce itself into its home market in the most efficient way possible. That’s where Pabst comes in.

“Expanding distribution in Kentucky is our main goal. We’re coming back home,” she said.

Pabst did not return requests for comment, but when it partnered with New Holland in 2016, its chairman, Eugene Kashper, said the Michigan brewery was “committed to using our platform’s capabilities to maximize success. This is a true long-term partnership on both sides.”

The first beer to come out of this partnership with Pabst? A Beer, AtG’s rebranded “lager for Kentuckians.” “This is a beer for the people, by the people, to enjoy with the people you want to hang out with,” said AtG cofounder Sam Cruz. “We wanted to brew a beer for everyone to enjoy and to show big beer what an American lager can be — what it should be.”

Molck reiterated that Against the Grain was not being bought out. She joked that there are change jars all throughout the brewery for people to contribute so that one day AtG can afford to buy Pabst.

The third-annual Kentucky Craft Bash, hosted by the Kentucky Guild of Brewers, is scheduled for Saturday, June 22, at Waterfront Park beginning at 1 p.m. This beer festival is a celebration of breweries all throughout the Commonwealth. Forty Kentucky breweries will pour over 100 different varieties of beer, including beers that rarely leave brewery taprooms and also collaborations brewed specifically for the festival.

This year, brewery guild members have partnered with New Riff Distilling in Newport, Kentucky, for these special barrel-aged beers, exclusively for the Craft Bash:

Akasha Brewing Co. at 909 E. Market St. (where I bartend part-time) is kicking off Kentucky Craft Bash weekend with a Summer Solstice Festival. The taproom will open early at 1 p.m. Friday, June 21 and will feature new beers, special small-batch hourly tappings and local guest drafts. Atrium Kitchen Food Truck will be in the parking lot.

Akasha is also tying its celebration to one that happens annually at Stonehenge during which visitors mark the longest day of the year with an all-night festival culminating in the sunrise over the heel stone. At 11:52 p.m. Eastern time Friday, as the sun rises at Stonehenge (4:52 a.m. their time June 22), Akasha will tap a new beer and toast as guests watch the live stream.