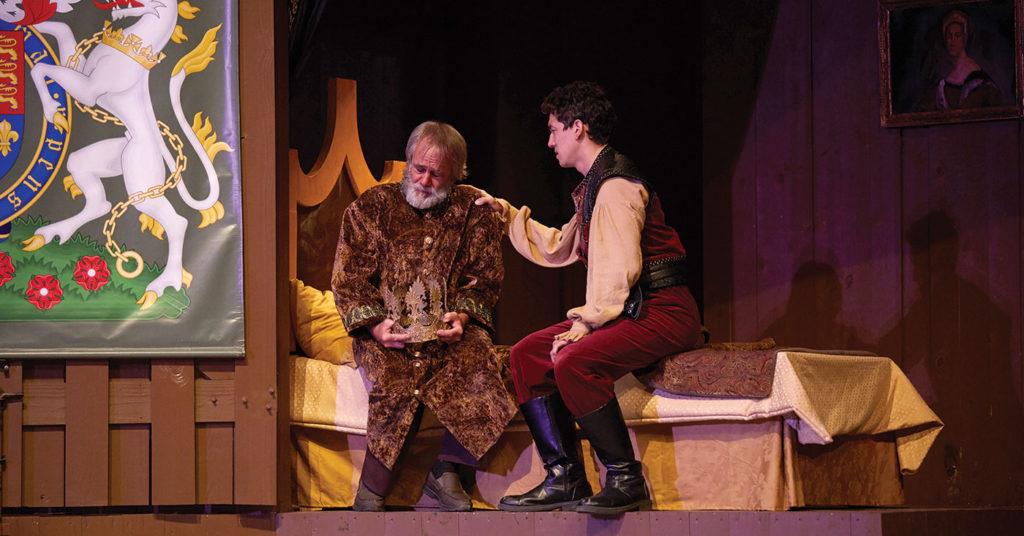 Three years in, there’s something transportive about the Kentucky Shakespeare Festival in Central Park’s “Game of Kings” series. It may be as simple as the setting itself, the nearly bare scenic design (Karl Anderson) of the wooden stage surrounded by three, tall trees that have earned the name “the three sisters.” It may be Scott Carney’s musical compositions, breathing life and gravity into the show, or Donna Lawrence-Downs’ rich costume design.

There’s only one “Game of Kings” show in each annual festival, spanning chronologically from “Richard II” on, but whatever the magic ingredients, it’s easy to feel as though you’ve stepped into another time and place as the show begins.

Part of this, too, may be the commitment to consistent casting, allowing us to see these characters fully evolve with each show. In “Henry IV, Part 2,” there are a few characters who we first met two years ago in the production of “Richard II,” and their faces remain the same. Henry Bolingbroke, now King Henry IV, is still played by Tom Luce, though now his depiction is worn down with years and the stresses of being a king. Jon Huffman still portrays Lord Northumberland, Henry’s once ally, now foe. Crystian Wiltshire is still there to play Lord Mowbray, as well as Prince Hal’s (Zachary Burrell) friend, Poins, and J. Barrett Cooper remains as crowd favorite, Falstaff. The program for the show even includes asterisks by the names of the characters who will follow the series into “Henry V.”

A few new faces do show themselves, including some that Actors Theatre of Louisville fans might recognize from last year’s Professional Training Company. Amber Avant, in particular, holds her own with a powerful stage presence in just a few scenes (as Lady Percy and Feeble) alongside long-time Kentucky Shakespeare vets.

There’s a backdrop of war, as there always seems to be in these things. But interestingly, we see more action in a bar scuffle — in which Doll Tearsheet (Hallie Dizdarevic) eagerly brandishes a dagger no larger than a kitchen knife at Pistol (Kyle Ware), a soldier armed with a sword — or in Falstaff and his page (Gregory Sanders) trying to fight off the officers that want to arrest him.

In fact, often, the stars of the show seem to be the Londoners whose company with Prince Hal King Henry finds shameful. Wiltshire’s role as Poins is the more captivating of his two parts, and Jennifer Pennington’s Hostess Quickly gives one of the most energetic performances, with outstanding comedic delivery. Their banter with each other, and with other characters, particularly the Lord Chief Justice (Gregory Maupin) makes for some of the best moments.

Through these characters, we’re also able to see the growth of Hal, from debaucherous Prince Hal to the new King Henry, who has to turn away from his old mischief. His catalyst, however, and perhaps the heart of the show, is his conversation with his dying father about the pressure of being king — and whether it’s something to wish for or dread. Luce and Burrell deliver this with powerful emotion that makes it worthy of the final scene of ‘Henry IV.’ •