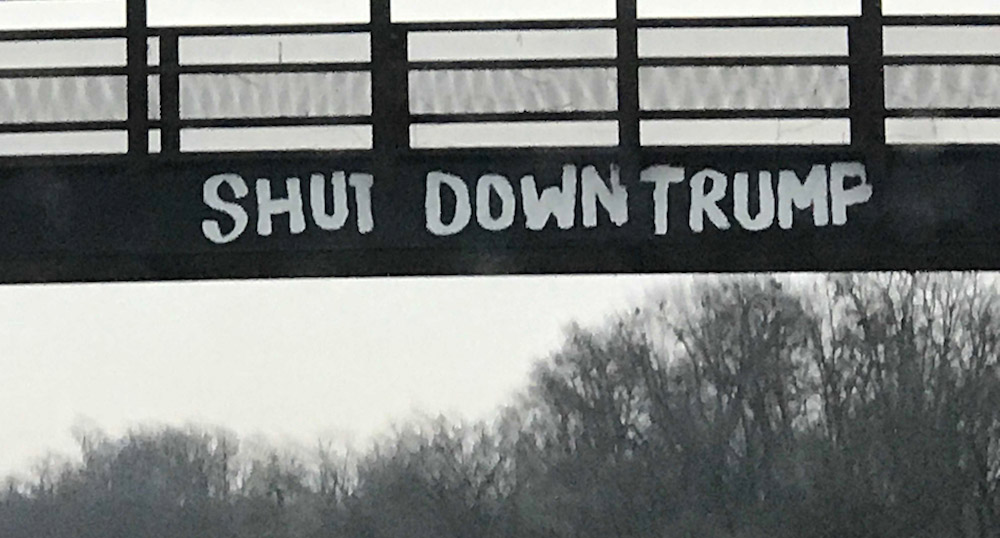 The first “Resist” tag showed up on a billboard just a few days after Donald Trump became president.

Spelled out in white paint on a billboard, the message was inescapable to thousands of people as they whizzed by in the northbound lanes of Interstate 65.

Now lengthened to “Resist 45,”this anti-Trump message and many more have appeared throughout Louisville, not only on billboards but also on highway overpasses, water towers and other structures, all visible from the city’s busiest roads:

Stop the war on public schools

Who is responsible for this stinging political graffiti?

The taggers are two local men who spoke to LEO Weekly about their motives and how they do it. Instead of using their real names, because what they’re doing is illegal, they asked to be referred to as Artist and Activist.

Activist said he painted the first message on his own, as a reaction to Trump’s election and inspired by a 70-by-35 foot “Resist” banner, dropped from a construction crane behind the White House by Greenpeace activists.“It was a way of venting my anger in a way,” he said. “Doing something so I could sleep at night. In other words, it was something I had to do.”

When asked how they reconcile spreading their message with defacing private property, Artist said: “It’s not OK. Everything we do, you know, there’s some contradictions in life. I feel like it’s a necessary evil a little bit. We’re getting the message out.”

The two have a code of conduct.

“We definitely would not put this on the front of a house or a business or a church,” Artist said. “We would try to cause less damage, the least damage with the most message — if possible to walk that line.”

They said they don’t target specific companies, but they don’t feel as bad if they hit a billboard owned by a large one such as Outfront Media, which has many around town.

“It’s not a private citizen,” Artist said. “The cost to that company, they’re pretty profitable, whether or not we do this or not. The difference would be that if I spray painted your house, that could really hurt.”

Even for corporations, they have rules, they said.

“I always told friends of ours: ‘Look, we have a gentleman’s agreement with Outfront,’” Activist said. “We don’t hit their regular, paid billboards.”

“As a rule, a lot of times we only hit the blank ones,” Artist said. “Unless it was something that we just couldn’t resist, you know?”

Calls to Outfront for comment were not returned. Louisville police also did not reply to requests for comment.

The strategy that the two explained to LEO is the same as those of the companies and organizations whose advertisements they sometimes obscure: They want to tell the world about their cause, and they want the world to buy into it, too.

The name of their movement is a reference to Trump, the 45th president, but he’s not the only source of their protest.

“He just happens to be on the wrong side of almost every issue we’re fighting for,” Artist said. “So, he’s a target and the namesake, sure, but I don’t think that’s actually our core message.”

That core message is “fighting for rights, the environment, just issues we feel strongly about,” Artist said.

“And immigrants,” Activist interjected. “The fate of the planet for sure. This is a pretty serious time. I mean, global warming.”

These are groups that wouldn’t normally get the exposure afforded to an expensive billboard, Activist said. “It’s trying to level the playing field, just a little bit, for the little guy.”

Soon after his first Resist tag, Activist was introduced to Artist, who was doing similar work. The two clicked, Artist said, snapping his fingers, and they have worked on Resist 45 together ever since. So far, they have tagged at least 30 surfaces with their messages, but they said there are others who are doing similar work locally.

Some of their tags are simple — their go-to phrase cheekily paired with an advertisement for the “Hunger Games” exhibit at the Frazier Museum. Others were more elaborate — 17 white crosses, representing each of the victims of the Parkland school shooting, swinging from an advertisement for a gun show.

Many have inspired strong reactions, particularly their stark message painted in white on a black billboard: “Kill the NRA.” That was Activist’s idea.

“He didn’t mean kill anybody,” Artist said. “He was talking about [killing] the idea of it and lobbying.”

The NRA posted an image of the tag along with a warning on its Facebook page: “To all American gun owners, this is a wake-up call,” the post read. “They’re coming after us.”

Artist and Activist said people responded with death threats. Luckily for them, they have managed to remain anonymous.

For the people who already hate the Resist 45 message, the graffiti just makes them angrier, Activist said. But, for those who are sympathetic, it’s encouraging.

“I know a lot of activists, a lot of people that say, ‘Man, I really appreciate that,’” he said. “That buoys my spirit. That encourages me. That makes me feel like —,” there was a sharp crack as Activist slammed his fist down, “someone’s fighting.”

When they’re not clandestinely scaling billboards, Artist and Activist said, they promote their causes in other ways by going to marches and protests and making donations.

They do most of their tagging with each other only. They know that police and billboard owners want to stop them, but, they said, they have had only a few scares — like when they heard a siren, so they decided to abandon what they were doing.

They work in the early hours of the morning in darkness. It takes about 20 minutes to an hour to finish the pieces. In 24 hours, their work could be gone. One remained seven weeks, the longest so far.

Activist isn’t phased by the dangerous height of their targets, while Artist is, but he said that’s not going to stop him from spreading his message. Nothing will, they said, even if Trump is replaced with a liberal champion.

“We had this conversation last week about what if somebody amazing gets into office — what will we do?” Artist said. “And [Activist] said there’s probably always things we can find to spread our message.” •