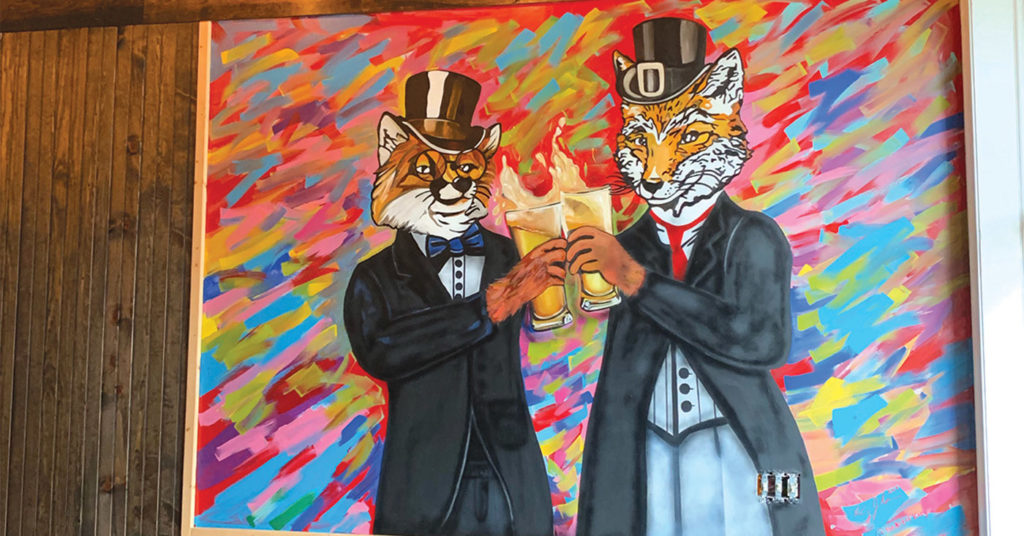 A mural at the soon-to-open Gallant Fox Brewery. Photo courtesy of the Gallant Fox.

One new brewery will be a nanobrewery using just a single barrel. Another hopes to bring craft beer to more area visitors. And another new one will be part of a public market. They are among four new Louisville breweries opening soon. LEO caught up with the owners of Wild Hops Brewery at 1001 Logan St., Hometown Brewing Co. at 4041 Preston Highway, Noble Funk Brewery at 940 S. Third St. and Gallant Fox Brewing at 2132 Frankfort Ave. to learn more about what beers they’re offering and how each brewery will fit in with the other 21 breweries in the Louisville area.

LEO: Why did you choose to open in that part of town?
Mike Safai, Wild Hops: “We bought this building because we wanted to move our coffee operations into a more urban environment where people could easily get to work and be surrounded by the energy of an upcoming neighborhood. Shelby Park has been a welcoming home to us. We knew we wanted to do something exciting with the extra space in the building, and originally it was just going to be a beer hall, but then we decided to go all out and create a Public Market around the brewery!”

Tom Brown, Hometown: “The brewery will open next to the Hometown Pizza. We chose that location primarily because we own the building and wanted to more fully utilize the space. We also feel that the proximity to the fairgrounds will create interest with out of town travelers.”

Dominique and Johnathan Shrader, Noble Funk: “We will be opening in SoBro. It is Noble Funk’s goal to provide a true gathering space, as there are currently not many venue options for food, drink and community-focused events in the immediate vicinity. … ”

Roger Huff, Gallant Fox: “ … We ultimately wanted to be in an area that was close to the cluster of other breweries in Louisville while still being in an area where we could be a neighborhood destination for the locals who regularly walk Frankfort Avenue. Clifton was the perfect choice.”

What about your taproom will stand out?
Mike Safai, Wild Hops: “Our taproom will most stand out to visitors because it is inside of the Logan Street Market. Public Markets are vibrant and bustling places where local entrepreneurs can showcase their talents and connect directly with the community.”

Tom Brown, Hometown: “Starting out we will use the existing restaurant bar to showcase our product. … There is a good possibility we will build a stand-alone taproom in the newly constructed warehouse.”

Dominique and Johnathan Shrader, Noble Funk: “Our taproom will include ample room to house a diverse range of activities and events. We plan to incorporate a pet-friendly outdoor area. Inside, we’re building on the strong bones of the former grocery store building to design a space ideal for meeting, relaxing and enjoying an array of community-focused programming.”

Roger Huff, Gallant Fox: “When we started to design the taproom, we had the goal of creating an atmosphere of originality that aligned with our Gallant Fox brand. With that in mind, we set out to create a taproom that would have the feel of a fox den. We’ve gotten in the habit of referring to the brewery as ‘the den.’ We have added warm, low lighting, driftwood tree wallpaper in areas, a mural by local artist Kacy Jackson featuring two gallant foxes enjoying some beers, fox taxidermy, fox wall art, a chainsaw carved fox … and even some barn wood tabletops.”

What is your brewery’s beer style?
Roger Huff, Gallant Fox: “Gallant Fox Brewing will be a one-barrel nanobrewery. The lower capacity means that Gallant Fox will be in a state of constant brewing and experimentation. Whether that is a no-hop gruyt IPA or a green tea black IPA, we will also have something new and different for our customers to enjoy. While we are sure that some customer-favorite recipes will return to our tap list from time to time, Gallant Fox will not be a brewery where you come in with the expectation of getting the exact same beer you had last week or last month, chances are it will have already been enjoyed and a new beer will occupy that serving tank.”

What area brewery inspires you and why?
Mike Safai, Wild Hops: “We like all the breweries in town, but I’d have to say 3rd Turn. They are good friends of mine and have been really helpful. … ”

Tom Brown, Hometown: “That’s a pretty easy question to answer. Cumberland Brews on Bardstown Road. Mark and I went to high school together, I purchased my brewery equipment from him, and we are partners in Square Pie.”

Dominique and Johnathan Shrader, Noble Funk: “Gravely Brewing continues to inspire us. They produce a strong variety of clean, consistent beers served in a uniquely designed and versatile taproom. … ”

Roger Huff, Gallant Fox: “We’ve been most inspired by the recent addition of Old Louisville Brewery. First, because they operate by brewing smaller batches and have shown just how successful you can be doing that. Second, their beers are great, and they really have fun with the recipes they put out. Lastly, their slogan of ‘good beer makes good neighbors’ really resonated with us. They have been great neighbors for the Old Louisville community and, in turn, the community has continued to flow through their doors and share experiences within their walls. … ” •