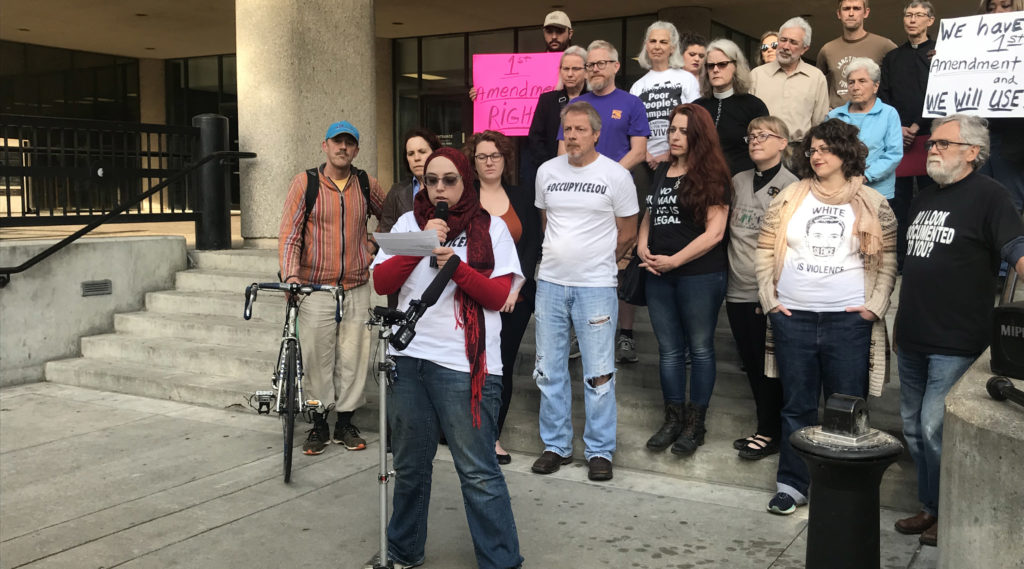 Clara Ruplinger and other activists and members of the Heyburn Nine.

Activists were fined just $150 each and spared jail Friday after being found guilty of criminal trespassing for blocking access to an immigration court in July.

An attorney in the case, Dan Canon, hailed the decision as a victory because of the relatively lenient punishment. He had told the jury that his client, Courtney Kearney, and Sonja DeVries and Bob Eiden, three of the self-described Heyburn 9, had been exercising civil disobedience to protest President Trump’s immigration policies.

Judge Julie Kaelin ruled that the $150 fines the three paid in a parallel federal court case would satisfy the fines levied in the Jefferson District Court case, Canon said. Basically, Kearney, DeVries and Eiden were able to walk out of court Friday without having to pay more money.

“It is a finding of guilt with no practical consequences at all,” Canon told LEO. They each faced the possibility of a $250 fine and 90 days in jail, Canon said.

Asked whether the jury gave weight to his argument regarding civil disobedience, Canon said: “I think that definitely has to come into play here. I don’t think in your average trespassing case where somebody has actively shut down the business of an immigration court for the day, I don’t think that they would have gotten off with not paying fines at all unless there had been a pretty good reason for it.”

After the two-day trial, the jury deliberated at least two and a half hours before making their decision, he said.

Six other protestors were arrested in July, but they plead guilty for “various personal reasons,” according to a statement from the group.

The nine had locked their arms together with cast-like devices, standing in front of elevators at the Heyburn Building at Broadway and Fourth Street.

On Thursday, prosecutor Ingrid Geiser told the jury in opening arguments that the Heyburn 9 protest caused chaos for those who had to use the building that day. “You’re going to hear a very simple case,” she said.

Attorneys for the three told the court that the defendants were engaging in an act of civil disobedience to protest the separation of immigrant families, and that while they would likely not present any evidence that conflicted with the prosecution’s, the jurors should “keep an open mind.”

Canon told jurors they might not agree with the Heyburn 9’s ideas, but they could support what they did anyway. “They believed what they were doing was right,” he said.

Courtney Preston Kellner, DeVries’ attorney, told the jury that they could choose to “disbelieve” the prosecution’s evidence and render a “not guilty” verdict.

Canon said before the trial that acquittal was not the main goal. “The point is to go and let the community hear about this,” he said.

At a press conference on the Jefferson County Hall of Justice’s steps before the trial began, members of the Heyburn 9 gave a similar message.

“The trial is not about us as individuals. Again, it’s about this policy,” said DeVries. “That’s what we’re challenging. We’re challenging the brutal, inhumane and racist practices of this government and ICE toward immigrants.

Eiden said that the trial could amplify the Heyburn 9’s message. “It brings you out here today, and that’s a big part of it,” he said.

The trial came on the day that Trump announced a new immigration plan to increase education and skills requirements for immigrants who want to come to the United States.

“We are looking at a policy that basically favors people who are already privileged, people who already what they have skills or degrees or something useful. This is a way of saying the rest are bad immigrants,” said David Horvath, one of the original Heyburn 9.

He and other activists, including Heyburn 9 member Clara Ruplinger, railed against several immigration policies at their gathering, including the increased difficulty of filing for asylum, ICE detentions of immigrants with no criminal history, “dehumanizing conditions” in custody, deportation of immigrants for “simple” infractions and immigrant children who have not yet been united with their families.

“The stories are endless and unjust,” Ruplinger said. “… We stood together in July, in solidarity with our Latinx neighbors and friends, to bring attention to these injustices, and we stand together again today to see the process through.”

[Editor’s Note: Dan Canon is a columnist for LEO.]