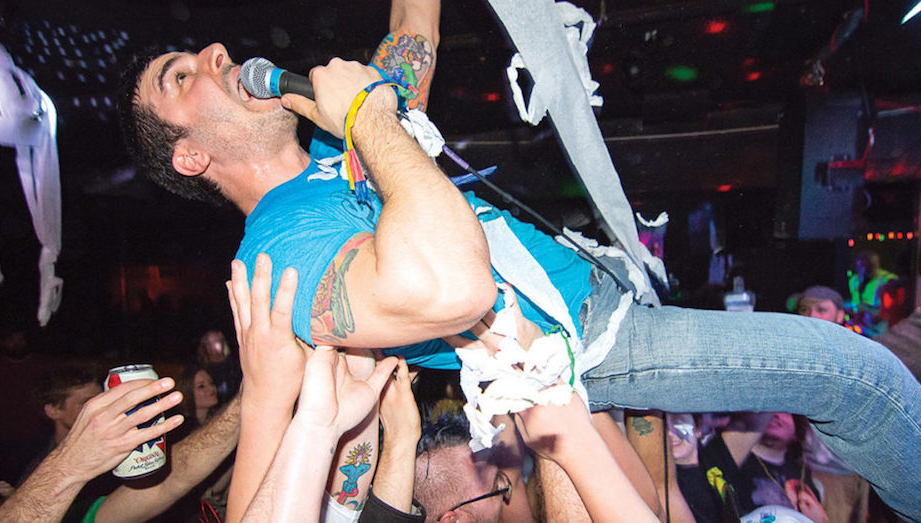 A rainbow-winged unicorn pool float sits on the floor in front of the elevated stage as singer Vinny Castellano lies prone inside of it, aggressively playing electric guitar and growling out lyrics inspired by “Spongebob SquarePants,” all the while a Gen Z audience repeatedly throws multicolored plastic balls all over him. Seconds before this scene, plastic masks and beads were thrown into the crowd, followed by a Venetian-masked, ferryman-like character toting a staff and bottle of Listerine on a chain — in place of the old timey lantern — escorting the frontman into said float, as a solo trombone plays a mournful death ballad. This tribute to Mardi Gras and somewhat cryptic interpretation of Plato’s “Ship of Fools” is just one of several of the crafted, themed shows from thrash metal band Belushi Speed Ball, which releases a new album, Prepare For Trouble, on Friday, April 19.

It started with a movie
Five years ago, local underground filmmaker Beau Kaelin was casting for a film that needed a fake black metal band to play a real show with an audience, and he asked Castellano to play bass. “The idea for doing a fake band instead of a real band came from Andrew Vititoe, who used to be the frontman for Ultra Pulverize, who did the vocals for this fake band,” Kaelin said. Once Castellano started playing in the “fake” band, he realized he missed making music, and a year later he made a “below demo standards” EP with a laptop and a mishmash of borrowed instruments and birthed the beginning of Belushi Speed Ball.

Being unconnected with the Louisville music scene, Belushi Speed Ball took a chance and booked a show at Mag Bar and asked local bands to fill the bill, but no one responded to their request. They then built their following with high-energy, theatrical performances, which include Kaelin as the character Señor Diablo, the band’s suit-and-sunglasses wearing master of ceremonies and eccentric manager, who has slicked-back hair, a mustache and speaks in a somewhat-Appalachian, slurred accent. He also has a habit of carrying around a Listerine bottle. Diablo is often hyping up the crowd — or shooting them with a toilet paper gun. And the audience loves the absurdity.

“I write music with the crowd in mind,” Castellano said. “We expect crowd interaction. If they don’t, I’ll stop and say, ‘This is the part you sing.’ It’s for the fans.”

Educational roots
A funny fact is that they’re all high school educators, except for the drummer.

“I make music for the kids,” Castellano said. “I don’t even swear. What makes us good teachers is the fact that we have lives outside of teaching. They have even had former students at their shows.

With a band named Belushi Speed Ball — which Castellano joked is “named after Jim [Belushi] and his love for [the video game] ‘Sonic Spinball’”— it’s not a surprise that their music is fast and thrashy, with a heavy dose of humor. Their earlier sound was more “a Wu-Tang Clan ‘Triumph’ where there’s no chorus. It’s just in-your-face aggressive. We do crossover thrash, moving more toward party thrash. More along the lines of Stormtroopers of Death. We go for a simplistic thrash style that’s still kind of punk. It gives us the opportunity to then play with anyone in town.”

When you’re there
Watching a Belushi Speed Ball show is a lot like going to a pro wrestling event. There are costumes, outlandish characters and antics, raw energy and the key ingredient: an involved audience. Each show has a theme, which is never repeated, and sometimes it isn’t until the next day that you realize what they pulled off. When deciding on ideas, “There’s usually a chain of texts between us where it starts out very mundane, then incredibly outlandish, then we reign it back in again,” Kaelin said.

“And sometimes we don’t,” Castellano responded, laughing. “Scraping trampled bread off the floor past 2 a.m. was so stupid.”

Kaelin said, “Anytime something goes awry like that, we find ourselves starting our sentences with the phrase, ‘In our defense…’”

Another now-legendary show antic involved a fertilizer spreader, 10 pounds of Nerds candy, 7 pounds of jellybeans, as well as cans of silly string and seltzer water.

“In our defense, it was funny,” Castellano said.

Belushi Speed Ball’s upcoming fifth EP Prepare for Trouble has a few more surprises than normal. It’s their first recording being released through a label, Gubbey Records, to help with a wider distribution. And in addition to the CD, they’ve made a limited Game Boy Advance video game edition of the record, with a bonus game, “Diablo Dragon.” The release show purposely lands on 4/20.