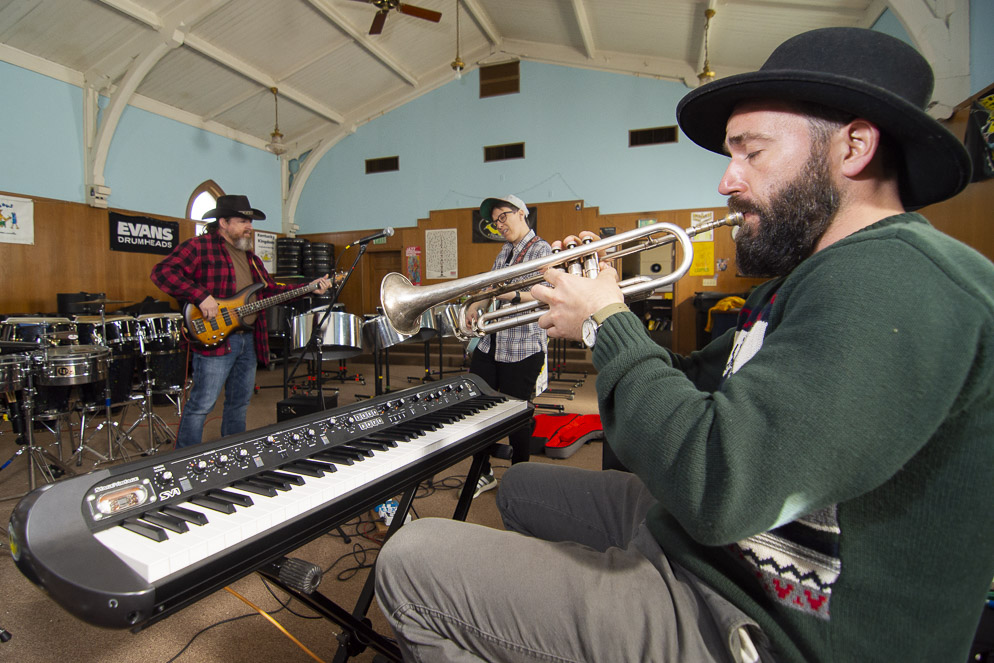 Every musician needs a place to rehearse before performing in front of an audience. With as solid of a music scene that Louisville has, practice spaces are located all over the city, in various shapes and sizes. They are tucked away in many unassuming places — and many are converted into these creative havens after the daytime use of the building is done. Each space has a different character that isn’t always reflective of the band or music being made in it. Here’s a look at seven local practice spaces, including where Rmllw2llz, Bridge 19 and Quiet Hollers rehearse.

Cat Casual and the Final Word
The Cat House
The Cat House is an old, red-brick building close to downtown that generally has loud noises leaking from it. Many will know it from the short string of all-ages shows that used to be there, but, these days, it is mostly the practice space for Cat Casual and the Final Word. William Benton aka Cat Casual  had lived in the apartment upstairs from 2009 to 2010 before moving to New York. When he returned to Louisville five years later, a bit of serendipity happened, and he was able to buy the building. “Practice spaces in New York are too crowded,” Benton said. “Five bands sharing the same space and coordinating that with a bunch of stupid jobs. It wore on me.” He said that it is very important to him to be able to run downstairs from his apartment and be able to start playing music, if inspiration hits him — and the Cat House provides exactly that.

Louisville Leopard’s Practice Space
Bridge 19 practices while surrounded by an arsenal of percussion instruments. Inside a former Masonic home, they use the Louisville Leopard Percussionists’ practice space during the Leopard’s off-time. Percussionist Meg Samples, who teaches for the Leopards, explained that the Masonic home was bought by Spalding University and is rented out to the Leopards. The building is isolated, allowing both bands to make as much noise as they need, without bothering a soul. The high ceilings and vast floor space provide plenty of area for the sound to move, giving the acoustics a great feel, allowing them to work through the complex harmonies and instrumentation that Bridge 19 employs in their moving brand of folk music.

The Monastery
In a backyard garage in Germantown, there is a fully-functional recording studio that is the home base for Derrick “DJ DS” Smith — DJ for rapper Romell Weaver, known as Rmllw2llz. They said that a lot of people pulled together to build the studio — helping to paint, sand and anything else needed so that Weaver’s label, Kr8vn8vs Records, can record there.
“Once people start believing you and see what you’re doing – they start to help out,” Smith said. The goal of the new space, Smith and Weaver said, is to help the talent signed to the label not have to pay big chunks of money to record albums. “We got it all right here,” Weaver said. “Everyone has little bedroom rigs, but we have it all in this room that we all made together.”

Drew Miller & Curiokey Club
A Carpet Store
Above a carpet store in West Buechel, there is a fairly large room where Curiokey Club practices in the after hours. An office space that now holds spare music equipment, merch and memorabilia from the road is where horn sections squeal as Curiokey Club rehearses. The store is owned by saxophonist Drew Miller’s parents. “I used to work here full-time and would try and come two hours before the workday started so I could practice in the back warehouse,” he said. “I found this place up here and asked if I could practice up here. It has carpet. It’s warmer, and that was maybe nine years ago now.” Those years of rehearsal, performances and touring are reflected by the various posters and flyers from gigs that Miller and/or the band has played in the last decade.

Baby Bones
Gubbey Records HQ
Close to Shelbyville Road, in the basement of a suburban house, lives the Gubbey Records HQ, where the punk band Baby Bones practices. Gubbey Records, a local music label that specializes in cassette tapes, has recorded many of the bands in Louisville over the years. The walls in the basement space are covered in stickers and flyers from shows that either Baby Bones has played in, or the myriad of Gubbey-associated bands have played in. “[Baby Bones] doesn’t just practice down here,” said Dave Rucinski, guitarist/vocalist of Baby Bones and Gubbey owner. “We recorded our last record down here as well as many of the Gubbey records. We set up here so we didn’t have to keep moving all of our equipment around.” A low-ceilinged basement where the singers are basically screaming into the walls is where a bunch of local music has been created.

Logan Street Music Studio
On Logan Street in Smoketown is a small complex of music studios where a dozen or so bands practice. For the last year and a half, Quiet Hollers has shared a space with Wax Fang there. I came into a Quiet Hollers’ practice for their upcoming tour and could hear the sounds of “Flood Song” spilling from the side of the building. The building used to be an adult daycare center that was turned into a music recording studio and practice spaces. Said guitarist/vocalist Shadwick Wilde, “There’s always a lot going on here. It has a good energy. It’s a good community for us. [Violinist] Aaron [West] actually has his own space down the hall here.”

Joann+The Dakota
Lyle’s Basement
Walking up to the house where rock band Joann+The Dakota are practicing, I could hear just a tiny rumble from the street. In the basement of this house, I found the band strategically placed by laundry machines and stacks of musical instruments, with plenty of memorabilia covering the walls. The band said that they used to practice on a farm where singer Joann Dickson formerly lived, but they have recently moved to guitarist Lyle Edward’s basement. They could make as much noise as they wanted out on the farm, but that is not so much the case in a neighborhood.

“We put a lot of time into insulating and soundproofing the space as much as possible,” said drummer Nick Stinnett. “We would turn everything up and have somebody play, while the rest went outside to listen. We eventually sealed everything up and balanced the sound so we’re not bothering the people next door.” They are currently working on a batch of new songs that were born out of these basement sessions.