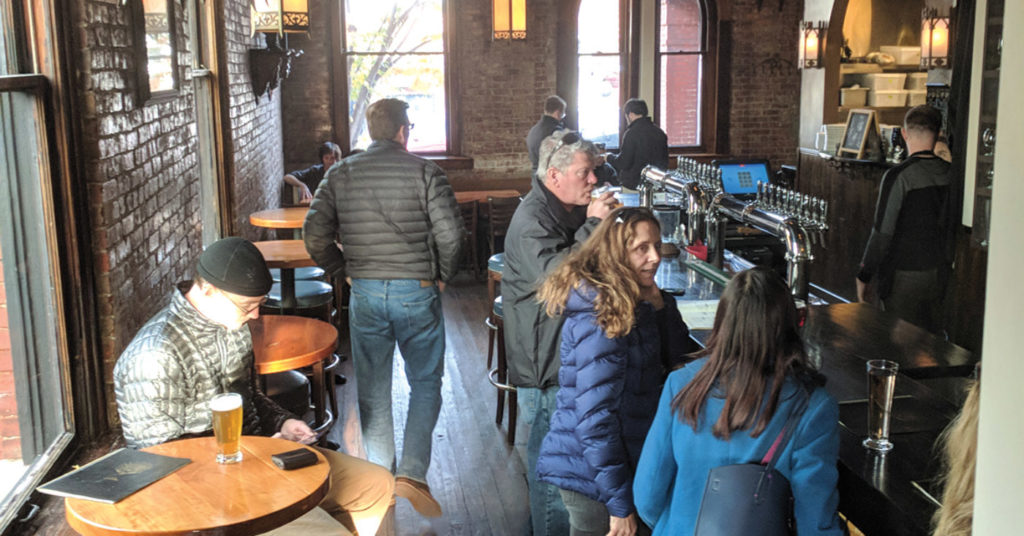 As much as I love breweries, I’ve always admired Holy Grale as being its own thing in Louisville — a unique beer bar patterned after a traditional European pub.

This isn’t a place you go for a tap takeover to “steal the glass.” It’s a place you go to gather, commune, dine on shared plates and sip beers from around the world that are worthy of discussion. Let’s face it, I’d be willing to bet that if you’re reading this column, you’ve already got plenty of logo glassware in your cabinets. I know I do. Rewarding beer experiences aren’t as easy to come by.

And it’s the Holy Grale’s distinctive personality I want to pay tribute to in this column by recognizing its accomplishment of being named as Kentucky’s entry to CraftBeer.com’s 2019 list of Great American Beer Bars.

The list was generated using CraftBeer.com voting compiled by the Brewer’s Association (which operates the website) from more than 7,000 votes. The website’s goal is “to tell stories about the people, communities and businesses who are the heartbeat of small and independent craft brewing in the U.S.,” according to editor-in-chief Jess Baker.

Holy Grale reminds me of when I first began getting interested in the many options beer has to offer. This was back in the 1990s, and the only game in town where I could try new beers, new styles, from all over the world, was Rich O’s Public House in New Albany. That pub still exists as part of New Albanian Brewing Co., and the vibe is similar — it’s all about the beer and the company you keep.

Anytime I walk into Holy Grale, I know I’m in for a learning experience and that I’ll end up poring over the ever-rotating beer menu for probably way too long.

Let’s face it, the pub is small but highly inviting, set in a former Unitarian Church dating back to the early 1900s, complete with stained glass and a gorgeous courtyard. With 27 taps (not to mention dozens of bottled beers), you’re always going to find something you want to try. Usually, I find several. A recent glance at the beer list offered beers ranging from Reissdorf Kölsch, a crushable classic based on the German staple, to 2017 Lokomotiv Merlot, a Russian imperial stout from New Zealand that is aged in red wine barrels.

Check out CraftBeer.com’s list, and you can find bars with missions similar to Holy Grale’s all over the U.S. The significance is not lost on Holy Grale owner Lori Beck, who credits the diversity of the beer list and the relationships Holy Grale has with breweries around the world, cultivated over the 10-plus years of operating the Holy Grale’s sibling business, Louisville Beer Store.

The success of the bar itself, though, is not just about the beer, Beck said — it’s also about people, from the employees to the patrons.

“It’s really just about drinking beer and hanging out with the people who are really just tried and true,” she said.

I love the care with which some breweries treat beers that many beer snobs might roll their eyes at. Last week, Monnik Beer Co. (which also has great food) announced the release of the Voice of the Turtle American Pale Ale, the beer style I might, if forced to choose, call my personal favorite. (In case you’re wondering, this particular version appears to have been named for a comedic play from the 1940s.)

American IPA is the style that a few years ago took the country’s beer-loving palates by storm, but the APA is sort of its laid-back little brother, a variance on the original malt-forward and moderately-hopped pale ale. Monnik’s new version was brewed with Amarillo and Idaho 7 hops (a cool and different choice), with the brewery offering this almost-poetic description: “Close your eyes and imagine a bouquet of red grapefruit, papaya, apricot, finished with notes of black tea and resiny pine. Now, imagine a warm sunny day.”

Idaho 7 hops are known for their tropical fruit aromas and flavors, as well as a sharp and piney finish, and this beer delivers, although in a balanced way. The hazy, straw-yellow color of the beer makes it resemble an American wheat to the eye, but it’s a hoppy pale ale all the way. The tropical nose and flavor profile are spot-on, and the moderate bitterness fades in the smooth, dry finish.

The beer is highly crushable and, honestly, tastes like “one more.” At 6 percent alcohol by volume, it’s not necessarily dangerous, but you may want to consider Lyft if you’re having more than two. Worth the try, regardless. •