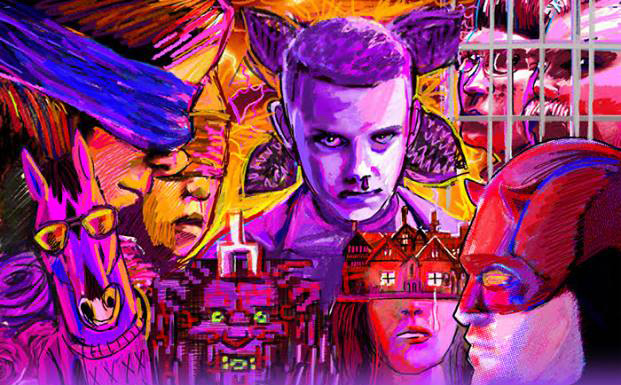 Eminem. Tim Burton. Aquaman. Kanye. Disney Princesses. Mario. They’ve all been the targets of Character Assassination, a reoccurring live comedy show at The Bard’s Town during which local comedians roast historical and fictional figures. An ad hoc troupe with members in Louisville and Chicago, including Kent Carney, Mandee McKelvey and Sean Keller, Character Assassination was started in December 2011 by Will Hardesty and Raanan Hershberg as a way for comedians to gain an audience and push their boundaries. This weekend, on Feb. 8-9, the theme is “Netflix and Chill” — the comics will make fun of each other while dressed as characters from “Daredevil,” “Stranger Things,” “Bird Box,” “The Crown,” “Making A Murderer” and more.

LEO: Tell us about how Character Assassination started.
Mandee McKelvey: The Bard’s Town hadn’t been open for very long. They wanted to do some comedy shows. They were interested in other formats, so Will and Raanan approached the Bard’s Town about doing comedy there.

McKelvey: They asked me to be the Virgin Mary. The first roast was Tyler Jackson dressed up as Jesus, and I was dressed up as the Virgin Mary. That’s pre-us understanding these characters. It was probably pretty awful, because we didn’t understand time lengths or things like that. By the fourth show, everyone was in costume roasting from the perspective of the character. Within six months, you had to have a special skillset to do the roast. Now, it’s been seven years. It’s become a fun squad of 15 comedians that we pull from around the city that can do these kind of writing and acting jobs and to improv when it turns to shit, which it does, they have to be able to adapt in the moment. It gets weird. It’s not even real roasting anymore. And we’re making our costumes. We’re thrifting and sewing.

What inspires a roast?
Keller: We each have our individual bucket list, but we meet up and figure out what’s going to be evergreen. We basically just talk about it until one or two ideas become really exciting to us.

McKelvey: In October, we shoot for something kind of spooky, and at Derby we try to find things that are Kentucky-centric. We’ve tried to think of one for [U.S. Sen. Mitch] McConnell.

What’s the Louisville comedy scene about? Is there a style unique to the city?
McKelvey: The alt-scene has kicked up in the last four years. They got so tired of not having a place to play. Kaiju, that is basically roast training ground.

What things are on your hell no list to bust on? Is there anything off limits?
Keller: Every single show, they tell me what I can’t do.

McKelvey: I think we’re evolving. Years ago, I played Michael Jackson. We have a white man that played Kim Jong Un. He didn’t do a voice or anything, he just looked like him. But we’re growing and evolving. We’re trying to be more considerate of what we put out there. We’re a little more sensitive about what we’re casting. If someone is going to do cross-racial casting, it has to be for a good reason. The thing about doing, say, Pablo Escobar, is that you can’t do it without doing his voice. We’re changing when we learn. We’re still growing as things are moving and trying to make the best decisions. I like the fact that we genuinely try to discuss the implications of our characters. The roasts are punching down. We’re punching the shit out of each other, and that’s not cool, but we’re doing it ironically.

How do you feel about so-called ‘PC culture’ as it relates to comedy?
Kent Carney: Without being all Donald Trumpy, two-sides about it. I am kind of of two minds about it. I think there are people that will willfully not get the point and have a knee-jerk reaction to things. And I think stand-up comedians are the most full-of-shit people on this. But, I think there needs to be some give and take. Comedians need to take responsibility for their words. I think that a lot of comedians have this attitude like, this is just a joke, like, I’m right, and any negative reaction you have to it is wrong. It’s selling yourself short. I remember reading a thing that Carlin said. He said that anything is on the table. He said that any topic is up. You can make anything funny, but the more fucked up the thing that you say is, the harder you have to work.

McKelvey: We have to write offensive jokes all the time, because it’s a roast. Is it something I would say, or something that my character would say. But I also don’t want to work in some slurs and stuff. In stand up, I don’t get the need to punch down. If you can’t write a set that doesn’t punch down on a marginalized group, then just go away. It’s so easy to not shit on a marginalized group. It’s shockingly easy.