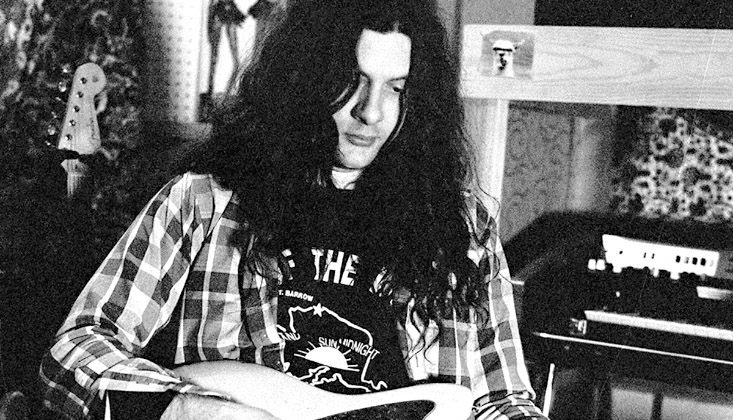 Kurt Vile’s off-the-cuff vocals and stream-of-consciousness lyrics over reverberated, rollicking finger picking might get the irreverent Philadelphia-based songwriter incorrectly labeled “slacker” or “stoner” rock. But a cursory look at his output reveals a deeply-industrious artist and road warrior. Vile visits Louisville this month for the fourth time in almost as many years, supporting his eighth studio album, Bottle It In. Vile chatted with LEO over the phone about studio collaboration, balancing tour life with fatherhood and the equally-oracular City of Brotherly Love totem known as Gritty.

LEO: It seems collaboration has been really common lately, like the record with Courtney Barnett and the appearances from Kim Gordon and Cass McCombs on Bottle It In. Do you see more of this sort of approach in the studio moving forward?
Kurt Vile: Collaboration has always been a part of me. One day I’ll make a list of everyone I’ve ever worked with [laughs]. I’ve always been totally into tapping in to that energy. Right now I’m jamming with my buddy Mike Polizze of Purling Hiss. I get inspired and feed off that.

I heard something about Deaner too?
Yeah, that was last winter. I haven’t seen him in a year now. I really can’t wait to do that again. He’s a legend. We did some recordings — I would love to do more. The schedule’s really crazy right now, but I can’t wait to run into him again.

Yeah, we all would love to see something come of that, for sure. It didn’t occur to me until hearing that, that there’s some parallels between Ween and Kurt Vile, in that sense that you and Ween can be eclectic and prolific but be, ya know, tongue-in-cheek about it too.

Cool, yeah, thanks. They’re heroes for sure. And they’re in New Hope and I’m in Philly, so there’s the PA connection too.

Who’d you love to work with, besides Neil Young of course?
I’ve been thinking a lot about doing something with anyone involved with the Sun Ra Arkestra. Obviously Sun Ra’s gone but Marshall Allen, maybe. Yo La Tengo, who I love as well, they know those guys and have done some stuff together. I’d be really into that too. There’s probably plenty more I’m spacin’ out on.

I wanted to talk about touring a bit. You come to Louisville a lot, you tour a lot. How do you balance that with fatherhood?
It’s crazy sometimes, but we’re also used to it and it gets better all the time. The family gets to come out and meet me places like Australia and New Zealand, which they’re gonna do again for a second time after this U.S. tour. It’s been intense, and then I got home Christmas Eve Eve and have been off for six weeks since then. That feels good, but it’s tough to have a job when you can be with your kids around the clock and then, all the sudden, you can’t. Ideally, I can work hard now and then maybe be home for a year straight at another time. Take it while you can get it, ya know. We’re all huge into music, it’s a religion. It’s all I know how to do, and they feel it too. This is what we do.

Maybe when they’re old enough, they can tour and play music with you too, like Jeff and Spencer Tweedy.
Totally. I have one song I’m working on that I know [my daughters] will sing back-up on. I need to get my home recording scenario up and running again. I definitely want to involve them.

Bottle It In has some of the cleanest production and poppiest melodies in your catalog, yet has four grooves clocking in over six minutes. Was it your intention to try to tie in pop and electric folk elements into these sprawling, breathing, prog-length movements, or is that how things just turned out?
I had a handful of modes I’ve been working through. None of it is a surprise, I’ll say. At the same time, “Bassackwards,” “Bottle It In,” and, um, “Skinny Mini” — those three I had no idea going into the studio they would be 10 minutes long. I had maybe a sketch going or a loop going and played and sang live and kept going and that felt right. Similar to a Sun Ra thing, when you’re locked in a zone. Other times, I do edit myself, but those [songs] felt spiritual. I know [this record was] extra raw and heady and challenging. I’d go through bouts of ‘oh, this is my best record,’ which I believe it is, to being like, ‘people won’t get it.’ And the response has reflected that [with] mixed reviews. I heard it on vinyl for the first time the other day though and I’m really proud that I stuck with my guns and made this strong statement. It’s long and weird, but it’s my statement.

Yeah, I love the driving nature of the record. Some of which seemed like a callback to [2009’s] Childish Prodigy. Would you team up again with Adam [Granduciel of The War on Drugs]?

I would definitely jam with Adam, I just haven’t seen him in forever. He’s in his own orbit. But down the road if he came through Philly, yeah, of course I’d want to. I certainly want to get back to my roots of recording at home, too.

What’s the official KV position on [Philadelphia Flyers mascot] Gritty?
Ya know, people ask me about him! Everyone seems to love him. From afar he looks kinda funny — I mean, in a good way. I don’t really care either way [laughs]. He’s made a strong impression for sure, a new staple of Philadelphia. •