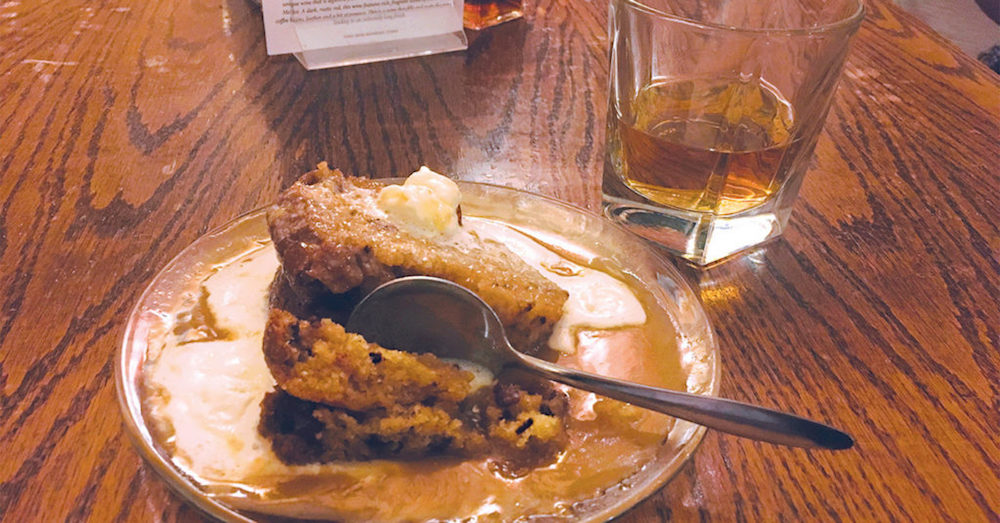 A friend visiting from Great Britain brought me a most welcome and very traditional gift during the recent holidays: a dense, savory, fruit-spice-and-rum-spiked Christmas pudding. A little bigger than a softball, the pudding was almost as dark and dense as a black hole. It had been aged for nearly a year in order to reach flavor and texture perfection. The proper way to enjoy it is to carve it into thick slices and serve warm with brandy (aka “hard”) sauce.

A very Dickensian manifestation, this is a different dish altogether from what Americans tend to think of as “pudding,” that chilled goo usually flavored with vanilla or chocolate. In fact, the all-purpose, casual term for dessert in Britain is frequently “pudding” or simply “pud.”

Indulging in solid pudding does not have to be confined to the holidays. It is a wonderful wintertime comfort food that will warm you up after dinner on a cold night, especially when accompanied with a glass of fine whiskey. It just happens that not one, but two different establishments on Frankfort Avenue can supply both.

A fixture of the dessert menu at The Irish Rover is another traditional British dessert. Sticky toffee pudding’s history is not as long as that of the Christmas pudding, having not arrived on tables until the 1970s. It may have originated at an inn in the Lake District. There also seems to be evidence it first appeared in Lancashire or Scotland.

Whatever its antecedents, sticky toffee pudding has become a staple of pub menus. It is essentially a dark sponge cake soaked in golden toffee sauce and served warm. A dollop of vanilla ice cream helps cut through some of the glorious stickiness. So does a tot of whiskey.

Appropriately, the Rover has a list of almost 50 Irish whiskeys, probably the longest to be found here in the heart of Bourbon Country. Pours range from $6 to $7 (Bushmills, Slane and Tullamore D.E.W.) up to more than $30 (Midleton Barry Crockett Legacy and Redbreast 21 Year). A rather nice feature of the list is that several of the pricier pours are available in half portions for half price.

If you are not familiar with Irish whiskey, it tends to be a lighter, more floral sip than is bourbon. Like its cousin, Scotch, it’s distilled from a mash of malted barley, though many blends also use grain whiskey distilled from corn, the major component of bourbon distillate. A large proportion of Irish whiskey is made in pot stills, while most American whiskey is made in column stills.

I chose Slane, an Irish whiskey with an American connection. (The distillery, located at Slane Castle in the Boyne Valley near the eastern coast of Ireland, is owned by Louisville-based Brown-Forman.) It’s a blend of grain and barley malt whiskies that have been aged in three casks — new, seasoned and sherry barrels. The nose and palate both have a heady note of fresh pears, and it provided a wonderful flavor contrast to the pudding.

For a more familiar pudding and whiskey pairing, head a block west to Bourbons Bistro. There, you’ll find that Kentucky staple, bourbon bread pudding, on the dessert list. Speaking of lists, the one here of bourbons and other American whiskeys is close to 150 bottles long. Again, you don’t have to spend a lot to enjoy a high quality pour. Many are under $10. (Some rare offerings can approach triple digits, though.)

Originally a way to use stale bread or biscuits, traditional bread pudding is made by soaking the leftovers in a mixture of milk, egg, sugar, vanilla, spices and, especially in Kentucky, bourbon. It’s then baked until it forms a golden crust.

The version at Bourbons Bistro is served surrounded by a lake of bourbon-laced caramel sauce and topped with tart cherry compote and a generous dusting of powered sugar. The hard decision was the selection of the accompanying bourbon from the pages-long list.

Between the fruit topping and the rich caramel sauce, I was going to have some very flavorful bites. This called for a bold bourbon. Yes, cask strength was going to be the choice. Again, no need to break the bank, so I ordered a wonderfully flavorful and complex Old Grand-Dad 114 to sip with my bread pudding. Perfect.

There’s a lot of rye in the mash bill, which gives this bourbon produced by Beam a lot of spice, providing great contrast to the sweetness of the dessert. The high proof and great caramel notes echoed and amplified the sauce.

So, warm pudding and whiskey is my strategy for staying warm over the coming winter weeks. I suspect I won’t even mind if the groundhog sees his shadow.