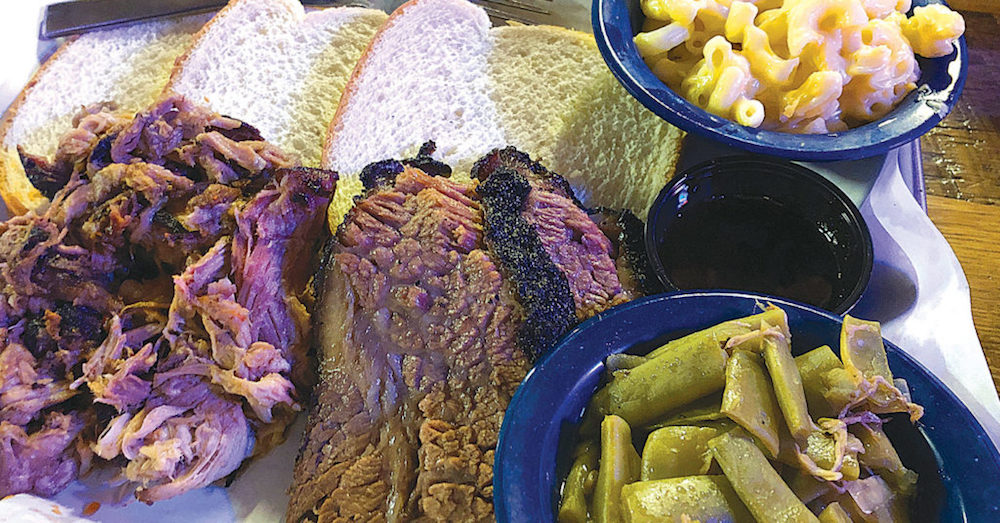 Five and a half years and about 500 rumors later, the long-vacant space that had long housed Louisville’s Lynn’s Paradise Cafe is occupied again. Martin’s Bar-B-Que, a small Nashville-based barbecue chain, reopened the Barrett Avenue A-frame in late August as its eighth property.

Lynn’s, which had enjoyed a 21-year run either beloved or mocked for its wacky decor and oversize Southern-style dishes, closed abruptly on a Friday night in January 2013.

Lynn’s was surely one of a kind, decorated in bright primary colors, retro, diner-style chrome-trimmed tables, and bright red and blue booths, with a trademark ugly lamp on every table and a giant fake tree in the middle of the room.

In fact, every vestige of the Lynn’s look has been removed, including that famous tree, which had the unexpected effect of making the large room look even bigger. Overall, it looks like a gigantic, country barbecue joint, from the plank floors to wooden walls, wooden tables laid out in long rows, and open rafters overhead.

In place of Lynn’s gewgaws and tchotchkes, Martin’s covers the walls with barbecue-flavor road-trip kitsch, a collage of country music posters, highway signs, license plates, college pennants, movie posters, no-trespassing signs, images of motorcycles and classic cars and, hovering over one end of the room, a giant, fake sailfish.

Diners line up along one side of the room at the back to place orders for food and drink, where you’ll also find a brightly lighted bar with a dozen beer taps, all stocked with well-chosen local and regional craft brews. There’s also a long, 25-seat bar in another room. I settled right in with a pint of citrusy, hoppy Three Floyds Gumballhead wheat beer ($6) from Munster, Indiana.

Martin’s extensive menu covers most of the traditional barbecue ground — pork, beef, chicken, turkey, sausage and even bologna — but it’s particularly proud of its pork, which is prepared daily with a whole hog smoked low and slow for about 20 hours over a mix of coal and hickory.

Want a little of everything? Pitmaster combos are $19.49 (for the Kid Brother sampler with pork, brisket and sides) to $87.99 for the Big Poppa sampler, enough to feed a group of six or seven with ribs, pork, brisket and four pints of sides! There’s a shorter list of salads, baked potatoes and kitchen sandwiches and trays with standards like cheeseburgers ($7.99 solo or $10.28 with a side), and nonstandards such as brisket or fried catfish tacos and more ($11.79 to $13.79).

Dishes are served casually on paper-lined steel trays or polystyrene bowls. We dived right in to a Kid Brother sampler, featuring 6 ounces each of pork and brisket plus two sides, and a Big Brother sampler ($23.49), which brings you 6 ounces of brisket, four ribs, and sides.

The long-smoked pork, pulled into shreds, had been marinated in Martin’s thin Jack’s Creek barbecue sauce, which imparted its sweet-hot flavor to the meat. If that’s your jam, you’re probably going to love it, because the meat is exceptional; but, I’d rather add my own flavoring to pure smoked meat as I like it.

The brisket was even better. Each sampler had two, thick slabs of meat, each at least a half-inch thick. The beef was marbled, providing fat to melt into the smoky flavor in a succulent mix. We detected sweet paprika and cumin in the dry rub on the ribs, but they were small, and the meat was on the dry side. The wet ribs solved that problem with a thick coat of their Sweet Dixie molasses-and-tomato sauce.

Desserts at Martin’s come packaged in plastic or film. We tried coconut cake ($3.99) still in stock on Monday, a day after its usual availability. It was fluffy and moist with a simple sugar-coconut icing.

Noise level: Even on a quiet, weekday night with the room less than half full, the combination of chatty parties and country music can build up a buzz. It may be harder to hear your partner on busier evenings. (Average sound level 79dB, with peaks to 89dB.)
Accessibility: The entrances, tables and restrooms appear to be fully accessible to wheelchair users.