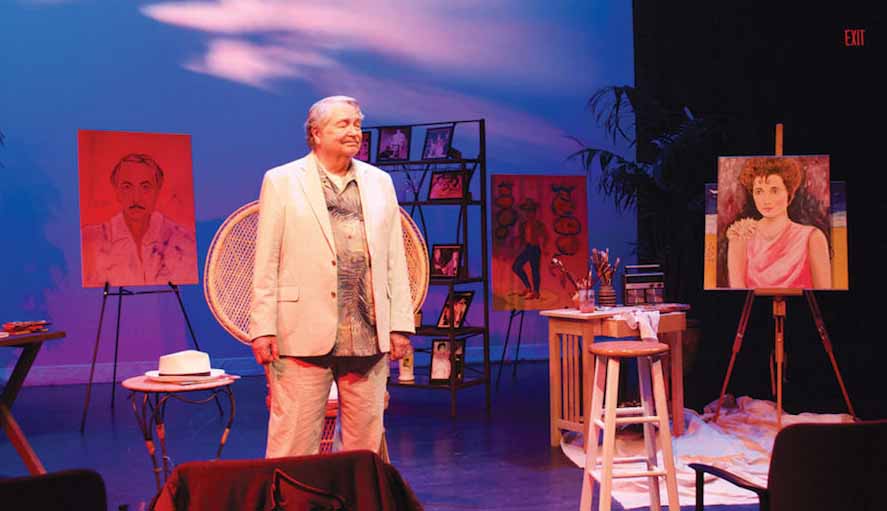 In the middle of the 20th century, the playwright Tennessee Williams accomplished something rarely seen in American history: He created a body of challenging, serious literary work that — thanks to the cinema — also became an enormously popular and enduring part of our culture.

His plays were fixtures on Broadway (and the London stage). He won slews of awards, including two Pulitzers (for “A Streetcar Named Desire” and “Cat on a Hot Tin Roof”). And film adaptations of his work featured stars such as Marlon Brando, Vivien Leigh, Anna Magnani, Elizabeth Taylor and Paul Newman.

Williams wasn’t a stage performer. But he was a fascinating, mercurial and controversial figure, a raconteur and storyteller with a fascinating and highly public life. And in the one-man play “Confessions of a Nightingale,” by Charlotte Chandler and Ray Stricklyn, Williams tells his own story.

Or, rather, actor Roger Fristoe tells the story. And he does it in a vivid portrayal so compelling that it feels as if Williams himself is on the stage. Fristoe’s accomplishment here is not an act of mimicry — though he does a superb job of capturing Williams’ pace and evoking the playwright’s physical and vocal mannerisms (which are on display in a number of interviews that can be sought out on YouTube).

Rather, Fristoe builds a vivid, compelling persona rooted in a deep comprehension of Williams’ life, his public face and his private loves and tragedies. That won’t surprise people who know Fristoe’s background. In addition to his work as an actor and playwright, Fristoe’s career includes a stint as a film critic and arts journalist for the Courier Journal. And, these days, people who follow classic film know him for the hundreds of essays and critical pieces he has written for Turner Classic Movies (search for his name at tcm.com).

Director Mike Seely also has extensive experience in theater and film, and this production is finely constructed. The play is set in Williams’ Key West home during the year before he died. The set has an airy, detailed Key West feel — enhanced by authentic Williams memorabilia and a collection of paintings (painted by Fristoe) that are directly inspired by Williams’ own paintings. (As the play proceeds, some of those paintings cease to be mere “props” and become emotionally charged characters in Williams’ life).

This Williams is a master of anecdote and gossip. He skewers iconic rivals such as Thornton Wilder. He mocks friends and colleagues such as Truman Capote. He pays homage to people including Leigh and tells tales of Greta Garbo, Brando and a host of others. At times, his genial tone gives way to sudden bursts of fury — mostly directed at critics.

But if the inside-Hollywood stories are delightful, it’s the emotional arc of Williams’ life that transforms this play from a celebration of celebrity into a full-fledged human drama. And Fristoe’s treatment of Williams’ great tragedies — the loss of his lover Frank Merlo and the devastating fate of his sister Rose — is beautifully rendered in this production. •

Now in its eighth year of production at The Bard’s Town Theatre, “The Kings of Christmas” by Doug Schutte is a must-see. If you don’t have a ticket, buy immediately — if you still can. If you can’t, you might consider bribery. Or theft. Or blanketing your social media connections in hopes that somebody who has a ticket will come down with something… The years have not diminished the ingenious intoxicating pleasures of this holiday treat.

The play opens with a familiar Christmas sentiment: “Marley was dead.” But in this case, the Marley in question is a cat. A cat owned by the King family, as wildly weird a family as you have ever encountered.

As far as I can tell, nobody has ever succeeded in summarizing the “plot” of this particular play.

I can tell you that upon discovering the dead Marley, the King family launches a courtroom investigation, with Carter King (Corey Music) tied up in the docket as the prime suspect. Carter is a cynical fellow who left home years ago to pursue a career as a critic in New York — where he has established a reputation as a meanie.

Carter, as you might expect, denies any responsibility for the death of Marley and tries to pin the crime on one of his two brothers.

The investigation proceeds through a “Rashomon”-like series of crime reenactments that reveals the strange history of the King family. Structurally, “Kings” proceeds along the lines of Dickens’ “A Christmas Carol,” as the name Marley suggests.

As the action proceeds, we’re plunged into a madcap world of madness, magic and music. It turns out that the King family was once headed up by Stein King, an Elvis-impersonating magician who disappeared under mysterious circumstances. He now reappears as a spirit who guides Carter and the audience on a deliciously wild ride through three visions of Christmas.

Once again, Schutte, who directs and performs, has assembled a spectacular cast that plunges headlong into this craziness. Corey Music is the sane center of the action. Jake Beamer plays Kennedy King, an aspiring magician who wields his baton with grandiose pomp — and chronic anxiety. Tony Smith plays Clinton King, an aspiring scientist and inventor who often leaves disaster in his wake, with an electric urgency. Megan Adair plays Stein’s widow Carol — and her imaginary sister — with shape-shifting virtuosity. Meghan Logue plays Wendy Williams, whose romantic advances Carter repeatedly snubs, with a full range of comic ingénue wiles. And Schutte infuses both Stein’s brother Frank — and the Elvis-quoting spirit of Stein himself — with the hyper-rational madness you’d expect to find in a Preston Sturges film.

Every time I see this play, I’m amazed and surprised by the way the comic antics suddenly produce a poignant catharsis in the last few moments. A wonderful piece of theater. •