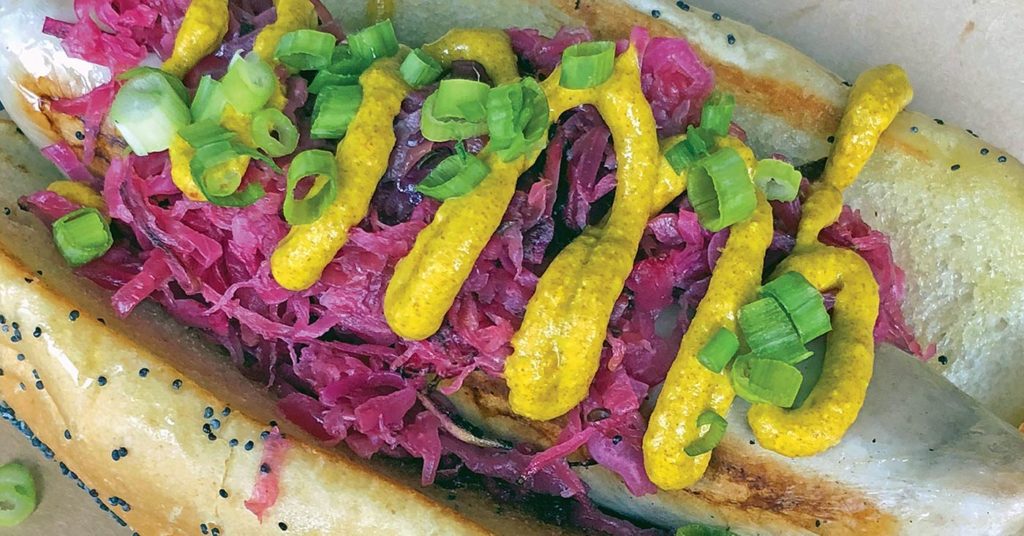 Every now and then, a new local place to eat and drink makes me exceptionally happy. Sure, I’m always glad to see any new eatery come to town. But, now and then, a fresh arrival delivers such pleasure in its food, drink and mood that it makes me jump up and down in delight.

Consider, if you will, Pints & Union in downtown New Albany, the utterly lovable restaurant … er, no, beer bar? … um, no, not that, nor a brewpub either. It’s a public house, a European-style pub, then, built into the beautifully renovated shell of an 1880s-era general store that later served as a neighborhood saloon.

In an age when most restaurants seem rigged for noise, Pints & Union is… well, not quiet, but tuned for sociability, with soft folk music in the background that’s loud enough to hear but not enough to dampen conversation. What’s more, there’s nary a television in the place. Stop, take your eyes from the screen and turn them to the people at your table. Don’t feel chatty? Grab a book from the extensive collection, or settle down with a friend for checkers, chess or a board game.

Pints & Union takes its beer seriously, without taking it snobbishly. Yes, there are some 40 carefully-chosen European and American beers in bottles or cans on the list, plus eight well-chosen draft beers; and yes, you can attend informative, weekly classes up in the cozy loft with beer guru Roger Baylor, who favors the motto “Education is important, but beer is importanter”).

But it’s not the kind of place that crams beer down your throat with wordy tasting notes. It’ll trouble you with no data beyond the essentials of name, style, alcohol by volume and price, although the staff stands ready to go beer-geek with you, if that’s your style. Pricing is attractive, with draft pints ranging in price from $4 (for Falls City classic pilsner) to $7 (for Wychwood Hobgoblin English Ale, standing in this month for the iconic Fuller’s London Pride, which is expected to return in October).

These guys are so laid back about beer, in fact, that they’re delighted to fashion a cocktail or pour a glass of wine or non-alcoholic potion instead, from a short list that doesn’t exceed $10 for a glass.

Pints & Union’s menu is much shorter than the beer and drinks lists, a move based not only on the pub-style concept, but on the realities of setting up a bill of fare that can be done well by a small crew in a tiny kitchen at the back of the long, narrow room.

There are just 10 items on the menu, which is subject to frequent change, plus daily specials. Affordable prices make it easy to indulge, ranging from just $3 (for a generous order of plain or seasoned shoestring fries) to $11 (for a traditional croque-madame sandwich, a kicked-up Hoosier variation to France’s answer to grilled ham and cheese). It’s open evenings only on Tuesdays through Saturdays, 4 p.m. until 2 a.m. most nights. A Sunday “hangover menu” from noon to 4 p.m. offers a half-dozen items from $6 to $11.

Mary and I met our pals Jim and Sage there, and, sure enough, we got right into conversation over food and drink, including thirst-quenching Topo Chico mineral water ($2) and Sidral Mundet apple soda, both from Mexico and German beers, a malty, gently sweet Hacker-Pschorr Oktoberfest ($4.25 for a half-pint) and a Weihanstefaner Hefe Weissbier ($4.25), light and fresh, with the clove and slight banana character of its genre.

An heirloom tomato salad special ($7) took full advantage of the season’s bounty with thick half-slices of red and yellow heirlooms bathed in a light, gentle vinaigrette.

Oversize chicken “wangs” ($9), about half a dozen, were juicy and tender, crisply fried in a savory, hot, brown michelada sauce that Jim swears is made with a ration of finely-pureed chicken liver to boost its flavor.

Hummus ($8) gets even better when it’s made with red lentils, thick, earthy and sweet, with plenty of warm grilled herb-scented naan for dipping.

An oversize smash burger ($6) is made old-school diner style, smashed on the grill with sautéed onions and topped with a slice of Velveeta — yes, you heard that right — chosen for its melty, salty sweetness.

Accessibility: Wheelchair users may wish to take a seat at one of the tables up front; the high bar seats and tight square booths would be difficult, and a long flight of stairs bars access to the loft.