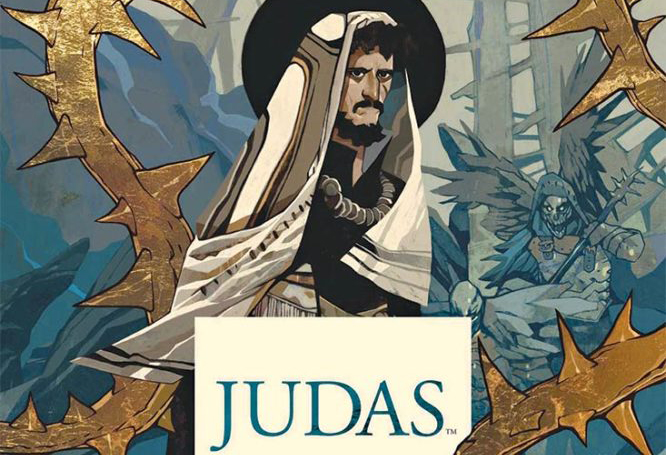 Lost and confused, “Judas,” the titular character, is struggling against his role in the traditional Christian narrative. Having been sent to Hell following his death, Judas Iscariot reflects on his life prior to and during his friendship with Jesus. He is forced to reckon with the thought that he was put on Earth to play the villain and has to confront the stages of grief that come with that.

What originally drew me to pick up Judas last winter was the art — Jakub Rebelka has done a stunning job of creating a dark visual poetry. Every panel is a mini-painting and visually drifts between abstract and realism. Jeff Loveness’ writing complements the art. Judas’ thoughts and the character dialogue read as poetry, and he uses psalms throughout in order to link the story back to the Bible.

“Judas” is a piece of Biblical fiction about the process of working through grief. Anger is a universal feeling, and I’m sure we’ve all wished we could confront our personal villain. Judas Iscariot is able to do that, and anyone with a revenge fantasy will find themselves rooting for him. “Judas” shows us the catharsis that comes from conflict — and whether or not it’s worth it.

Following in the footsteps of “Dante’s Inferno,” we are shown Hell itself, and it is relatable. • 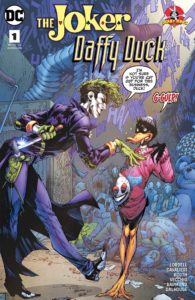 Seeing This Book on the shelf, my first thoughts were about whether it would be funny or serious — well, it’s somewhere in the middle!

We open with the Joker doing a stand-up routine at a comedy club in Gotham City. As the scene moves, we see the audience is frozen mid-laugh as clowns play a laugh track and inform their boss that Batman is on his way.

Switch to Daffy Duck (yes, that Daffy Duck!) on the phone going mad while being shuffled from one customer service system to the next on his quest to report his faulty gadget to ACME Electronics. We’ve all been there, and we can relate. He’s finally had it and decides he’s going to go there in person!

So begins a story titled “Why Tho Theriouth?” To make this delightfully-long story short, Daffy happens in on the Joker killing his not-so-great henchman and lamenting the street as being no good for finding good help. Daffy is discovered and, with quick thinking, he tells him he’s from ACME Hench. What follows is a fun romp in which Daffy Duck is actually the good guy!

Written by Scott Lobdell with beautiful art penciled by Brett Booth and perfect colors by Andrew Dalhouse, Daffy is rendered in a realistic way that makes it look like an actual duck is hanging out with humans, and he may be the least animalistic one of all!