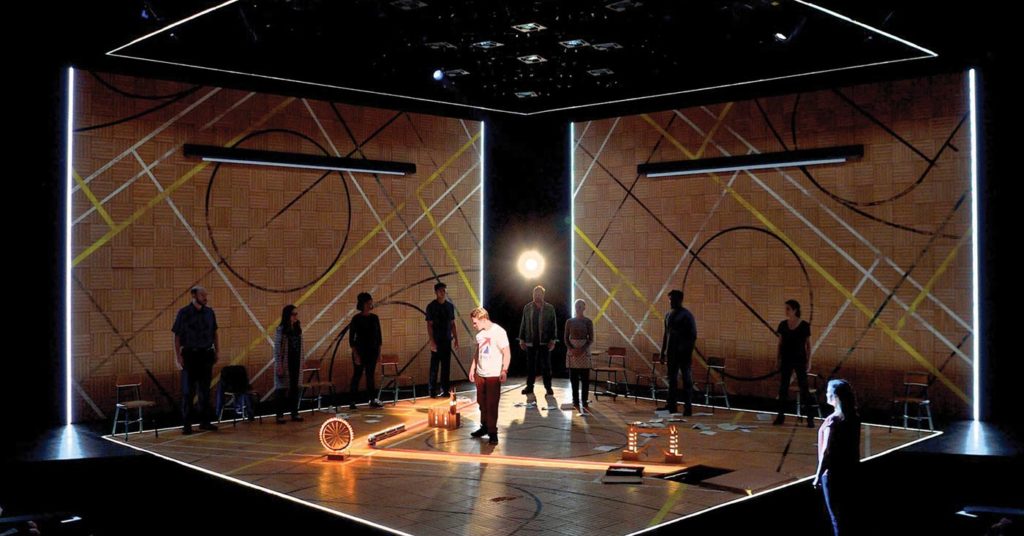 Alexander Stuart, center, with the cast of ‘The Curious Incident of the Dog in the Night-Time.’ Photo by Jonathan Roberts

“The Curious Incident of the Dog in the Night-Time” is a fictional exploration of neurodiversity. The main character, Christopher, is a lad with a prodigious memory for facts, a preternatural grasp of mathematics and science and a hyper-logical mind that is incapable of coping with the far less logical conventions of society. He can’t tolerate metaphors — because they are lies. He cannot comprehend displays of emotion. Physical contact with others terrifies him — and is likely to trigger a violent, defensive response.

But confront him with a puzzle that can be solved through logic, and he will pursue it with the same dogged rigor as his hero, Sherlock Holmes — no matter what stands in his way.

In the novel by Mark Haddon and the play, adapted by Simon Stephens, Christopher faces such a puzzle — the mysterious slaying of a quite harmless dog.

And when he sets out to discover who perpetrated the crime, everyone around him erects obstacles. But the most fearful hurdle he must overcome is his own neural wiring.

Telling a story of such an unconventional hero requires unconventional theater-making. The geometry of a conventional stage — upstage, downstage, left, right — can’t bring an audience into Christopher’s world. Actors Theatre of Louisville has risen to that challenge, with the opening last week of this stunning production, directed by Meredith McDonough.

Kristen Robinson’s scenic design greets the audience with a disconcerting geometry that’s both familiar and unsettling. Focus on any given area and its circles, parallels, grids and angles seem as logical as, say, a game board or a sports court. But try to comprehend the entire area, and things suddenly go out of kilter.

It is customary for theaters to post alerts that warn audiences about such things as gunshots, fog machines, mature language, graphic violence and so forth. For this production, ATL goes further. It has prepared a detailed list of sensory-intense trigger moments and has scheduled a less intense “sensory-friendly” performance (Sunday Oct. 7, at 2:30 p.m.) followed by a moderated discussion. (The list is on Actors’ web page for the show.)

The humans on this stage are as impressive as the theatrical realm they inhabit, and McDonough has crafted a production as insightful as it is dazzling. Alexander Stuart takes on the extraordinary puzzle of Christopher, a young lad whose surface is all brilliant intellect and suppressed emotions — except for rare moments when he revels in the calm beauty of a starlit night, or more frequent moments when he erupts in paroxysms of anger, fury and grief. The role requires portraying the massive range of Christopher’s extreme personality — while always holding onto his core. Stuart achieves that with absolute conviction throughout.

Brian Slaten and Jessica Wortham play Christopher’s estranged parents. Their love is a currency he cannot comprehend — but the audience surely can, and it can understand the impulses that drive them to continually make promises they will never be able to deliver. Tina Chilip plays Siobhan, the teacher and advocate who understands Christopher best — and one wishes that every neurodiverse child had the support of such a teacher. All the other performers (Maya Loren Jackson, Trevor Salter, Luis Moreno, Sunny Hitt, Sherman Fracher and Seun Soyemi) and every role — neighbor, ticket clerk, police officer, fellow traveler on the train to London — is vividly depicted by the ensemble.

‘The Curious Incident of the Dog in
the Night-Time’
Through Oct. 10
Actors Theatre of Louisville
316 W. Main St.
actorstheatre.org
Times and prices vary

This year brings the eighth-annual Ten-Tucky Festival of Ten-Minute Plays at The Bard’s Town Theatre. This is a chance to see work by nine playwrights, nine directors and a slew of performers from the region. I’ve seen many short play festivals — including ATL lineups. Although production values for Ten-Tucky are more plucky and ingenious than lavish and polished, play for play this one is as strong as any I’ve ever seen.

Rebecca Ryland’s “Havocc,” directed by Leila Toba, is a comic take on the threat of human obsolescence in an increasingly automated world. Like climate change, this scenario once seemed like a far-off prospect. But it’s happening as we speak. (Cast: J.P Lebangood, Brigid Connelly, Nick Carter and Juniper Leslie Dempsey).

“Mr. Fix-It Saves the Night” finds playwright Nancy Gall-Glayton in especially droll form with an outrageously-funny story (directed by Jason Cooper) about a man with a sleep disorder (Watson), his long-suffering wife (Leila Toba) and the weird, wee-hour handyman who comes to fix things up (J.P.Lebangood).

In Mark Cornell’s “Oh, Geez, Florida, Yah,” a criminal family of Minnesotans hides in plain sight on a Florida beach. Bundled up — because, after all, it’s still winter back home — they draw some attention. It could be called “Fargo meets Florida” (yes, I know where Fargo is). Sabrina Spalding directs brilliant minimalist performances from Jake Beamer, Mandi Hutchins, Hannah Wold and Jake Reber as an unsuspecting beachcomber.

“Silent Partners” by Stefan Gearhart and directed by Doug Schutte, is ripped from imaginary headlines. When a robber decides to hold up a Kohl’s department store with an imaginary gun, all manner of weirdness ensues with Gracie Taylor, Gerry Rose, David Capeheart and Dan Shoemaker.

I’ve seen Courtney Groszhans’s work only on Ten-Tucky bills, but her witty takes on contemporary culture remind me of Nora Ephron in quality and timeliness. In “Stranger Danger,” directed by Corey Music, she skewers those of us who are addicted to our mobile social media feeds (with Abby Braune, Mandi Hutchins, Sarah Mackell, Jake Beamerm and Corey Music).

“Perspectives” by Curt Himmelberger and directed by Clare Hagan, is a rom-com with a fascinating narrative twist and great performances from Hannah Wold and Jordan Lyons.

“Heads, I Win” by Gray Shaw is an outlier here — an insightful, poignant play about privilege and homelessness. It’s a moving work directed by Ryan Watson that offers powerful performances by Corey Music and Watson.

“The Land of the Techies” by Clare Hagan and Adam Martin (with “script sarcasm” by Anna Shelton) and directed by Rachel Allen, sends up the world of theater — and the divide between the thespians who live in the light and the stage techies who skitter like cockroaches in the dark (with Shelby Simpson, Mandi Hutchins, Sarah Mackell and Hannah Wold).

In previous Ten-Tuckys, Peter Stavros has written memorably about workplace culture and rules. In “PMA and the Beast,” directed by Jake Beamer, three campers confront a monstrous beast in the forest. One camper has been advised by his life coach that a Positive Mental Attitude will solve any problem. To find out how PMA fares in this crisis, you’ll have to attend the festival…  (with Jake Beamer, Corey Music and Andrew Stairs). •