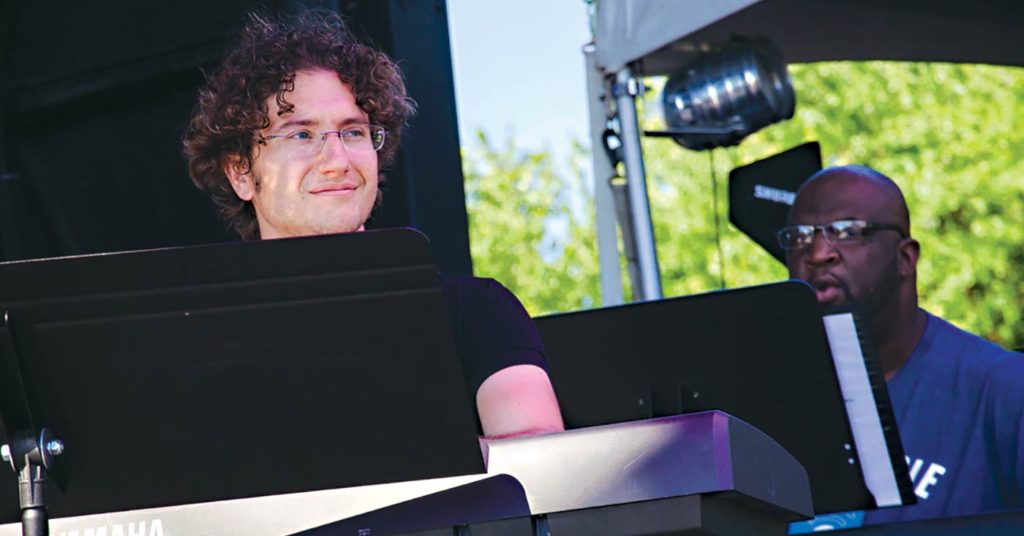 Scroll down the list of artists performing at Forecastle this year. From the top down, there are several names that make it around the festival circuit. What you don’t often see at those other high-profile events around the country is the presence of a local music scene. The Forecastle Festival, by comparison, has pushed to include more Louisville music in recent years. And this year, for the first time, Louisville Orchestra Conductor Teddy Abrams will curate an entire stage of local music all weekend. The newly Louisville-centric Port Stage, which will be moved this year to the Kentucky Landing area at the front of the festival, kicks off on Friday with a performance by the Louisville Leopard Percussionists and closes Sunday with the annual Teddy Abrams & Friends set.

“It’s an opportunity to showcase the diversity of our local scene and offer artists a creative platform to collaborate, network, learn and share in an experience bigger than any one of us,” Forecastle founder JK McKnight said. “I’ll never forget interviewing Ben Sollee way back, and he was talking about performing in 2012 in front of all his friends, how he looked around and everyone he’s ever worked with was on stage, and the crowd was just losing their minds. It kept building and building into this super cathartic moment, one peak after another. It was validating, made him realize that this is exactly what he is supposed to be doing in life. Those moments matter, and we want to create more of them.”

You may remember seeing Abrams when he brought a string quartet to jam with My Morning Jacket at Forecastle in 2015. Or again in 2016 when he introduced the Forecastle Symphony and commissioned the future of a revolving collective of Louisville talent pulled from every corner of the music scene with origins across jazz, blues, hip-hop, rock, folk and, of course, bluegrass. Since the introduction of the new supergroup (also known as Teddy Abrams & Friends) the dynamic of inclusion at Forecastle experienced a shift and ambitions grew.

After the group returned in 2017 to great fanfare, Abrams was given free reign to book every act on the Port Stage this year, and he created a lineup of experimental programming that encapsulates the local music spectrum.

“This year, it’s not so much the Forecastle Symphony as it is a real showcase and a demonstration of Louisville itself,” Abrams said. “It’s a commitment towards saying that this our time. It’s our time in the city to show a lot of the really great things about our music scene that we all know as Louisvillians, that we have not necessarily done the best job of putting onto a national platform. Most festivals would never dream of asking a conductor or somebody associated with their local orchestra to be involved at all. Can you imagine the New York Philharmonic at Governors Ball or Chicago Symphony at Lollapalooza?”

But that’s what makes Forecastle a bit different than other major music festivals. It didn’t start out as a big-money, corporate festival. Its roots are a small, community event in Tyler Park in 2002. While it’s certainly grown and changed since then, there’s still a push to get Louisville acts involved.

“It will be diverse, eclectic, innovative and honest,” McKnight said about this year’s Port Stage. “[Abrams] is magnetic, and has a unique ability to coalesce our local music community, which was the primary reason I started Forecastle 17 years ago. It was an easy decision.”

A festival within a festival

Describing his curated event as “a festival within a festival,” Abrams gathered a crew of figureheads in the music scene to generate unique ideas for sets. For him, it was bringing Terry Riley’s minimalist masterpiece, “In C,” to a festival setting on Saturday. A living composition, the classical piece requires at least 20 musicians to perform and takes a different form each time it’s perceived.

“You feel very in tune with your surroundings once you kind of give into it,” he said. “We need some cosmic unity. That’s why we’re doing that piece — it speaks for itself.”

There are similar offerings within each set at the Port Stage this weekend. It begins on Friday with a matinee performance by the always-impressive Louisville Leopard Percussionists, a youth organization that teaches skills in rhythm and performance. The rock hour starts later that afternoon with Wax Fang, followed by something different with the Thrills, a sporadic sextet supported by Abrams, vocalist Carly Johnson, alto saxophonist Jacob Duncan, bassist Danny Kiely, Scott Moore on strings and drummer Paul Culligan.

“[It’s] a welcome addition, and a chance to showcase the insane amount of talent and diversity our city has to offer,” Scott Carney of Wax Fang said about the Port Stage takeover.

Sunday’s lineup features a set by the extraordinary fiddle player Michael Cleveland and his band Flamekeeper, whose searing solos are more essential than unexpected. The women of Maiden Radio — Joan Shelley, Cheyenne Mize, Julia Purcell — will bring their masterful folk. Teddy Abrams & Friends closes the stage with a set of covers, joined by Houndmouth guitarist Matt Meyers, guaranteed to be loud, uncanny and full of surprises.

The chance to perform

There are quite a few Forecastle veterans that will be on the Port Stage this weekend, but it also gives up-and-coming artists a chance to have a place at the festival. R&B singer Chanson Calhoun, who will join 1200 in the West End Showcase, will perform at Forecastle for the first time: “I’ve heard so much about Forecastle and I am honored,” said the recent Kentuckiana Idol winner. “This opportunity is definitely a huge attainment to put on my musical resume, I am so grateful. I believe it will help change the direction of Forecastle in the years to come. Louisville artists deserve a platform to showcase what kinds of talent are born and bred in the 502 — diversity is important, because people who have never been to Forecastle will come out and show love, and the audience overall expands. Everyone wins.”

While taking chances and innovative ideas might not be the flashiest part of the festival, it has definitely left a mark on Forecastle and continues to help define it and differentiate it from the rest of the circuit. And sometimes those little innovative sparks have led to bigger things. What started as a way to momentarily get the Louisville Orchestra involved in the festival, led to Abrams booking an entire stage.

“His Forecastle wave started small — orchestral collaborations with our headliners — and just grew and grew, refusing to crest,” McKnight said. “After back-to-back years headlining the Port Stage to great fanfare, we just decided to hand over the reigns to him for the weekend.” •