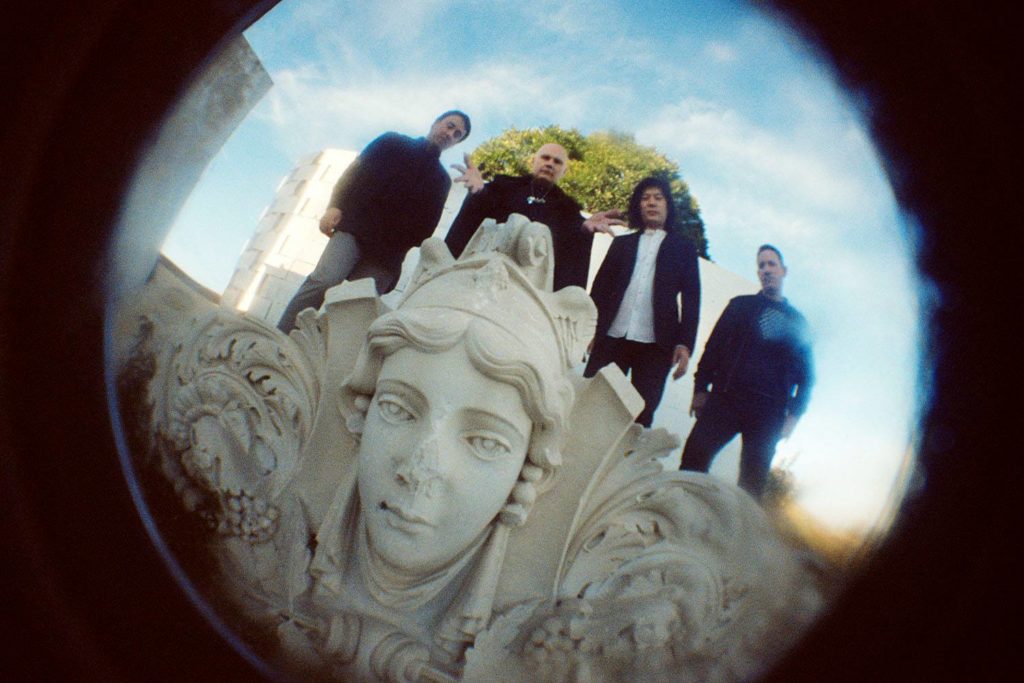 It’s been 25 years since the summer of 1993, when The Smashing Pumpkins shook the alternative rock and grunge universe with their epic breakthrough album Siamese Dream.

On Saturday at the KFC YUM! Center, the band performed a memorable set full of songs from that iconic record, as well as other material from that decade, when they were at the forefront of a Generation X musical movement of which they are one of the last prominent members standing.

As George Lucas refers to “Star Wars” as a space opera, The Smashing Pumpkins could be considered a grunge opera.

Two years ago, the band was in town with half of the original lineup, Corgan and drumming master James Chamberlin. On this tour, they are reunited with guitar virtuoso James Iha, a founding member who was absent from the group for 15 years. Guitarist Jeff Schroeder, who replaced Iha, has continued on. Original bassist D’arcy Wretzky continues to leave a void, which has been filled by Jack Bates, son of New Order bassist Peter Hook.

The band’s leader, Billy Corgan, set the tone early in front of an enthusiastic crowd with a moving performance of “Disarm,” the group’s signature song from that summer a generation ago when the band announced themselves as not just another grunge band, but as one with wide eyes and large goals, unafraid to mix distortion-fueled guitars with piano, church bells and violins.

As Corgan played the acoustic guitar on “Disarm,” the crowd was shown photos and video of Corgan happy as a child, a time which has been the focus of many of his personal lyrics. The night’s performance featured great digital video work.

Iha was greeted to loud applause joining Corgan on stage for “Rocket.” The song began Corgan and Iha’s symbiotic relationship on this night as the two moved effortlessly together, exchanging guitar parts and sharing solos.

Corgan displayed his prowess as a guitar wizard, proving he belongs in the pantheon of the greatest guitarists.

The third song, “Siva,” off their debut album Gish, provided a glimpse at how the Chicago-based group established their own grunge sound. Corgan provided some of his best guitar work and Chamberlin, like Secretariat in The Belmont Stakes, moved like a tremendous machine.

The beginning notes of “Rhinoceros,” which followed, brought cheers from the faithful as another classic Gish song, bringing out sounds reminiscent of 1980’s Nintendo games like Zelda.

After performing a well-received cover of Led Zeppelin’s “Stairway to Heaven,” the band ripped into “Cherub Rock,” the opener off Siamese Dream that would create a sea of dancing and crowd surfing when they headlined Lollapalooza in 1994.

Other highlights of the evening included a performance of “Zero,” off the classic 1995 double album Mellon Collie and the Infinite Sadness. A show stopper, the song shows off Corgan’s talent as a lyricist with words like, “I’m in love with my sadness” and “I never let on that I was on a sinking ship.”

Among the other cuts played from that album were “Bullet with Butterfly Wings,” “Thirty-Three,” and “1979,” the latter of which had streams of fans shaking in the aisles.

The band’s second encore featured the recently-released “Solara,” a hard-charging song showing the band is still full of fire.

After a three-hour set, one couldn’t help wonder how the group stayed on point through such sophisticated songs. Corgan’s voice never wavered and after 31 songs, only a diehard fan of the band’s classic but largely forgotten “Pisces Iscariot” could have wanted more.