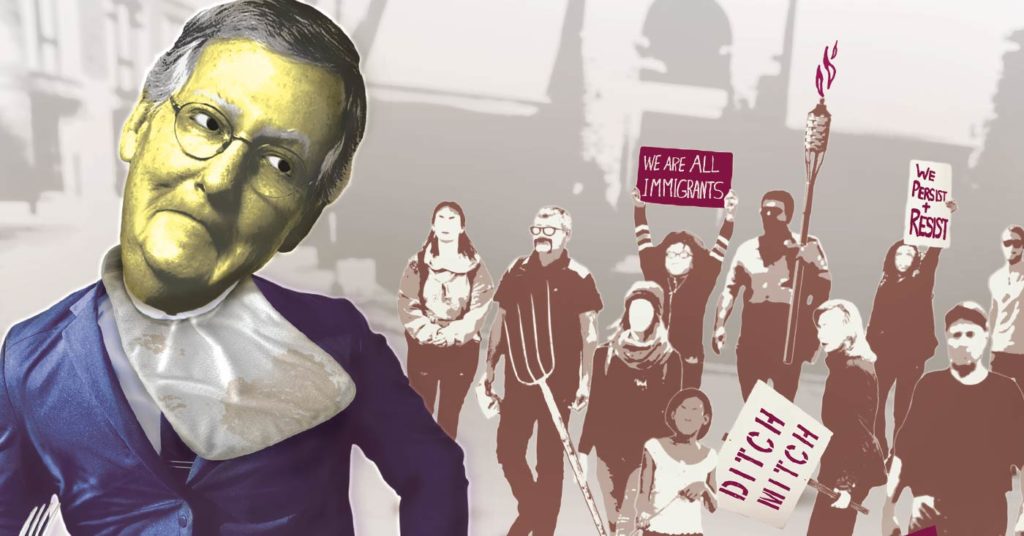 Watching liberal activists hound Mitch McConnell with smartphones and megaphones at local restaurants, screaming about abolishing ICE, I couldn’t help but think: I never knew it would be so easy to reelect Mitch in 2020.

Videos of these encounters have rocketed around the world and serve as a reminder to conservative voters that, “Oh yeah, Mitch McConnell is one of us.”

We tend to define our politicians these days not by what they do, but by their attitude and their enemies. And McConnell couldn’t have a better enemy than the abolish ICE socialists, who, in addition to harassing him, have taken up residence in downtown Louisville because a feckless mayor won’t kick them off the sidewalk.

The more publicity they get, the more Republicans voters are reminded why they voted for Donald Trump in 2016…and why they must keep his party in power in the years ahead. Some Republicans may not love everything about Trump, but they see the abolish ICE people and say: “There’s no way in hell I am turning the country over to them.”

What troubles me about these public confrontations is that it feels like the American Left has given up on elections as the method by which we resolve our political differences. The Left, impatient to express anger over Trump’s behavior and Republican policy choices, now resorts to harassment that will hurt their cause when people head to the ballot box over the next two federal elections.

I appeared on CNN the other night in my role as a Political Contributor to the network to debate two very fine people — Kirsten Powers, a wonderful writer and human being, and Nada Bakos, a thoughtful former CIA analyst — on the occasion of Trump’s visit to the NATO meetings in Europe. The conversation turned toward accusations that Trump was exhibiting authoritarian behavior and whether American democracy was being damaged.

Ms. Bakos had tweeted: “The republic is burning and we are all bystanders. (This is not hyperbole).” I replied that I thought it was alarmist to say that America is crumbling, given that we haven’t had one election since Trump became the president. Relative to the history of the Republic, Trump’s presidency is a mere blip.

I pointed out that we have a 242-year history of durable American democratic process whereby we resolve our political differences through voting (with the notable exception of the Civil War), and that we can vote out Trump’s party and him personally in the next three years —  or keep them in power — depending on how voters feel about the job he’s doing.

I was taken aback at what Ms. Bakos said next, that we cannot “wholly rely upon voting as like a stalwart against all of this erosion.” I shudder at the alternative.

The magic of the Founding Fathers and their system of government is that we can change it all every two years if we feel like it. I just don’t understand how you can throw out 240 years of American democracy after one half of one term of one presidency.

What has become clear is that the American Left — because of their TDS (Trump Derangement Syndrome) — no longer believes in civility or voting as critical pieces of our democracy. I have no problem with people protesting politicians and speaking out, but I do have a problem when public servants like McConnell and White House Press Secretary Sarah Huckabee Sanders are chased from eateries.

Are we so angry about politics that we must ruin one another’s dinner over it?

The American Left is so dissatisfied with Republican democracy that it has turned to harassing conservatives in public places in hopes, I guess, of convincing them to give up their professions. Impatience with an electoral system in which leftists don’t always win is ruining the Democratic Party.

The Left, it seems, thinks if enough conservatives are made uncomfortable they will no longer participate in politics, making it much easier for Democrats to win elections. But the opposite will be true — harassing McConnell, Sanders or anyone else will cause conservatives to double down on their principles and fight even harder. These protests reinvigorate conservatives, reminding them anew that their country should not be run by the socialist, open borders crowd.

These dinner disrupters aren’t hurting McConnell — they are helping him. While I hate to see him chased around The Highlands by a bunch of loons, I can’t imagine a more effective advertisement for his reelection. McConnell gets it, which is why he held a press conference last week stating that he “will not be intimidated by these socialists who apparently prefer open borders.” McConnell even name-dropped Sens. Kirsten Gillibrand, Kamala Harris and Elizabeth Warren, tagging them all with the abolish ICE crowd to further nationalize and mainstream this attack on the Democratic Party.

There is something to be said for basic human civility. Calling someone a “turtle head” and shouting “we know where you live, bitch!” may make a protester feel good in the moment, but I can assure you the guy who said those things helped McConnell as much or more than any phone banking volunteer ever will. Thanks dude!

Even as the American Left gives up on voting as the means to enact change, we’ll nonetheless have an election in November and then again in 2020. If Democrats continue to be defined by the abolish ICE socialists, Trump is going to win 40 plus states, and McConnell will be U.S. senator until January 2027.

If you are mad about politics now, wait until November 2020 when you hear the crowd chanting: “Stick with Mitch! Stick with Mitch” on Election night and ask yourself: “Was chasing Mitch McConnell down the street with my smartphone held aloft worth it?” •

Scott Jennings can be reached at [email protected]. He is a former advisor to President George W. Bush and Senate Majority Leader Mitch McConnell. He is cofounder of RunSwitch Public Relations. He is on twitter @scottjenningsky.