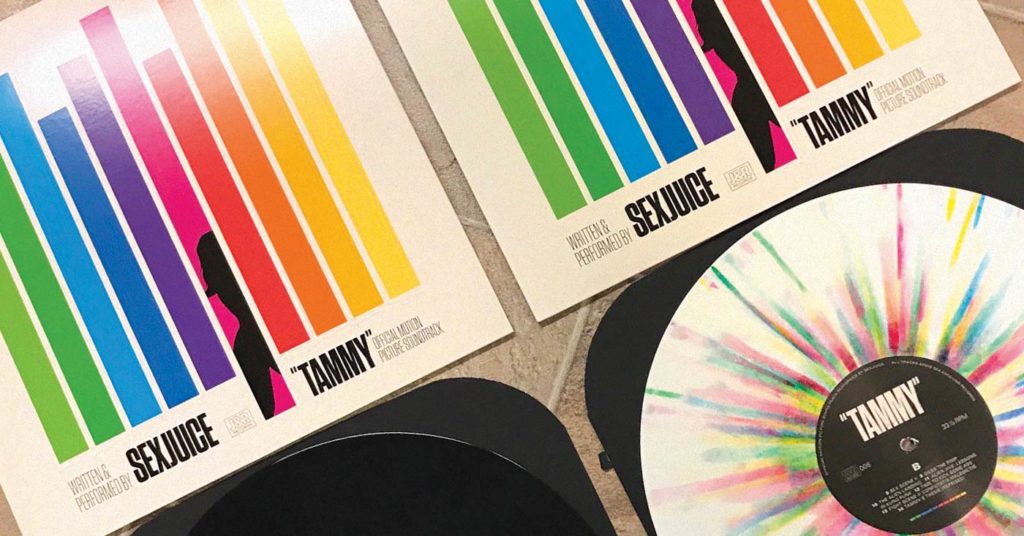 Martial arts-instructing extraterrestrials. A gold-hearted, pseudo pimp. Revenge against a crew that took out a family member. These are all plot points in Tammy, a ’70s funk-inspired soundtrack to a movie that doesn’t exist by the band Sex Juice. The brainchild of Jeremy Perry (The Deloreans) and Zach Driscoll (Maximon), Sex Juice started as a way for a few friends to come together and play funk music, but, as they practiced and recorded, they realized they were wading into territory that sounded like the score from “Shaft,” so they created a movie plot of their own, and structured the music around it, ending up with the fake soundtrack that is Tammy. We caught up with Perry and Driscoll before the album release party at Zanzabar.

LEO: On how their first album became a soundtrack to a movie that doesn’t exist.
Jeremy Perry: Initially, there was no ‘let’s write a soundtrack,’ or anything. It was just a couple of people who wanted to write funk music for fun. Zach and I are really into movie scores and classical composition and different sorts of disciplines from throughout the 20th century, and I think we wanted to try some of that out. Instead of your normal rock band thing — the guitar guy’s doing a riff, then you got a lead guitar player who’s doing something that’s higher up, and a bass player… everybody’s doing different shit. I like the idea of focusing in on the motive, and the rhythm section supporting it in a really strong, kind of tight-knit way that you don’t really hear in indie songs or rock songs. So we ended up writing a bunch of songs really quickly, and were like, ‘This sounds like a fight scene’ or, ‘I used the wah pedal on this so this sounds like a sex scene.’ We had all this material, and we felt like we needed something as a backdrop, so that’s where the soundtrack idea came from.”

On using plot points to arrange the album and create a narrative.
JP: We could perform all the music as it is without any kind of context, and a lot of the songs would be like, ‘OK, cool — here’s a band playing old school funk kind of stuff.’ If you took a Puccini opera, and changed all the words to ‘la,’ and know there are no words and no plot, and it would still be good, but the plot makes it a three-dimensional thing.”

Zach Driscoll: I feel like it kind of brings the audience in, in a certain way. The movie isn’t there, but they know we are playing [the song] ‘Sex Scene’ because we project a title that says sex scene while we’re playing it. So, I think it’s bringing the audience in a little bit, wanting them to collaborate. What is the projection going on in your head when listening to this music? It takes you to a place when you have this sort of loose narrative to what’s going on.”

On the plot of the fake movie that the soundtrack is based on.
JP: A girl named Tammy has a brother named Sammy… it sounds like I’m going to start with some children’s rhyme. Anyway, Tammy’s brother Sammy gets killed by these people called the K-Street Crew … this is all just shit we made up. She tries to get the gang back, and fails at first. Eventually, she gets help from this dude in the neighborhood named Giles, who is also a pimp, but that’s just his front for his connection to these aliens that he knows, that he pulls anytime someone needs help. He want to pretend that he’s a bad guy, but he’s really this guy that just wants to help you. He connects her with these aliens that teach her a space-age form of kung fu called kung-funk. And with that, she’s able to defeat the K-Street Crew.”

ZD: Something we talked about at the beginning of the group was using voice as another instrument, because it was something that you heard a lot in the ’60s and ’70s. The ‘Star Trek’ theme is a prime example of it. And it’s just a cool sound. They’re not saying anything, but it’s just another tone, another kind of sound.”