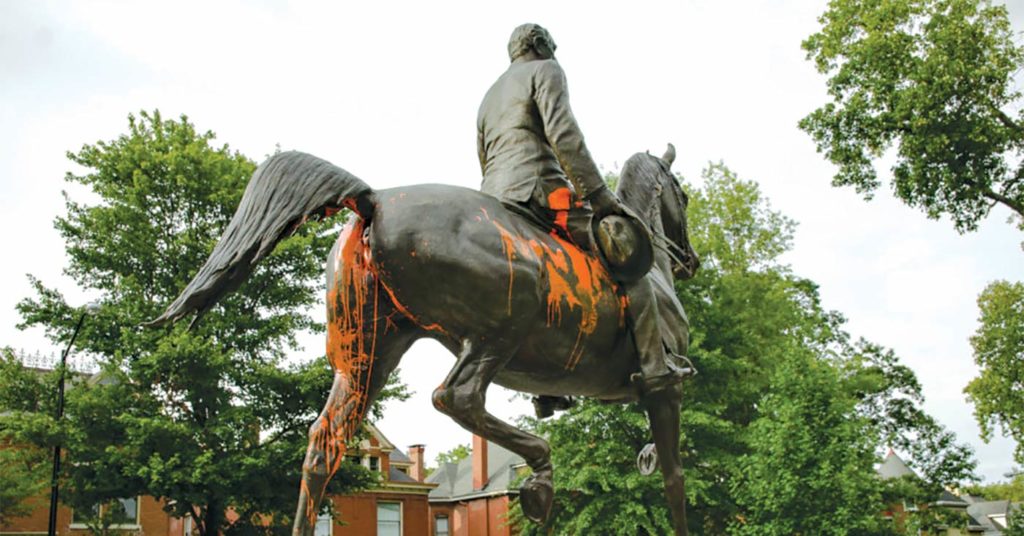 Vandalism on the John B. Castleman statue. | Photo by Nik Vechery

Removal of controversial public statues “is no small matter” and may be resolved by adding “more nuanced historical context,” according to a city panel’s draft report on public monuments.

That is one of city Public Arts and Monuments Advisory Committee’s findings in the recently released draft of guidelines and principles for existing and new public art.

The draft, prepared by a panel of seven historians and experts in art and landmarks, was released June 6. It calls for current and future public monuments to represent values held by the city, including the promotion of inclusivity and unity. It’s described as a start for the city to take a deeper look at whether current monuments fit these values.

Some may be surprised to read that the report does not have any specific plans for the controversial John B. Castleman statue, which was the topic of conversation at public meetings throughout the year.

The bronze statue has been the target of activism and vandalism since the Charlottesville, Virginia protest in 2017 over a statue there. Locally, protesters called for the statue’s removal because of Castleman’s past as a Confederate soldier. The statue has been defaced with orange paint and the words “Racist” and “Traitor.”

The final version of the report is expected to be released by the end of the month, when Mayor Greg Fischer will decide the next steps.

Under the principles of public art and monuments, the working draft says, “monuments are not history,” but they become “sanctioned versions of history.”

“They reveal some parts of history and hide others, while imposing on us notions of who we are and where we come from,” the report says.

Louisville’s “monument landscape” is more about the history of monument making, “not necessarily the full history of Louisville. This must be rectified,” the report says.

“In the post-Civil War era, for example, monuments to Confederate soldiers were erected both as a way to placate and as a way to perpetuate systemic racism, bigotry, and slavery. This is historically significant. But in our lived experience monuments do not serve such purposes. They are instead primarily tasked with representing a shared history to the public,” the report says. “Thus the city must occasionally revisit its monuments in order to adjust our landscape and ensure that it reflects a shared vision of our history.”

Louisville’s monuments should reflect the city as a whole, it says. “Louisville needs to align its artworks and monuments in public spaces with the vision of our city as a progressive, compassionate, and equitable community.”

The report says that the city cannot hide the problematic history of some of the public art pieces.

“A bronze figure towering above a city street gives the impression that the city celebrates the entire life of the figure depicted. But no life is beyond criticism and some of the most impactful Louisvillians (in terms of our city’s landscape and institutions) are also very controversial figures. The city should not shy away from these problems,” the report states.

The criteria for removing a monument must be “rigorous” and may not be the first choice. Instead, the committee proposes adding more historical context in the form of another monument or other adaptations of the original piece.

“Removal is the best option when it is no longer possible to reconcile the monument’s message with the values of the city,” it says.

First, is the principle legacy at odds with the city’s current community standards? “Secondary and tertiary contributions may tarnish a subject’s legacy, but whenever possible monuments should be evaluated based on the principal legacy of their subject and its appropriateness to contemporary community values,” the report says.

Following that question, the report asks, is the monument a “potential rallying point for racist or bigoted groups?” Different art pieces can have different meanings for many groups, however, the city should not maintain any piece symbolizing bigotry and racism, it says.

Finally, the report asks does the object celebrate a part of history that a majority of Louisvillians believes is fundamental to who we are and what we believe? Any and every art piece in the city, “should reflect ‘us’ not ‘some of us,’” according to the draft.

Local author and historian Emily Bingham told LEO the draft is a productive path for how to handle public art in Louisville, rather than executive decision on specific pieces of art. And, she said, “We have a lot of different way to lift up history without putting up in bronze.” •

To read the full report, go to:
louisvilleky.gov/sites/default/files/public_art/june_revised_working_draft.pdf