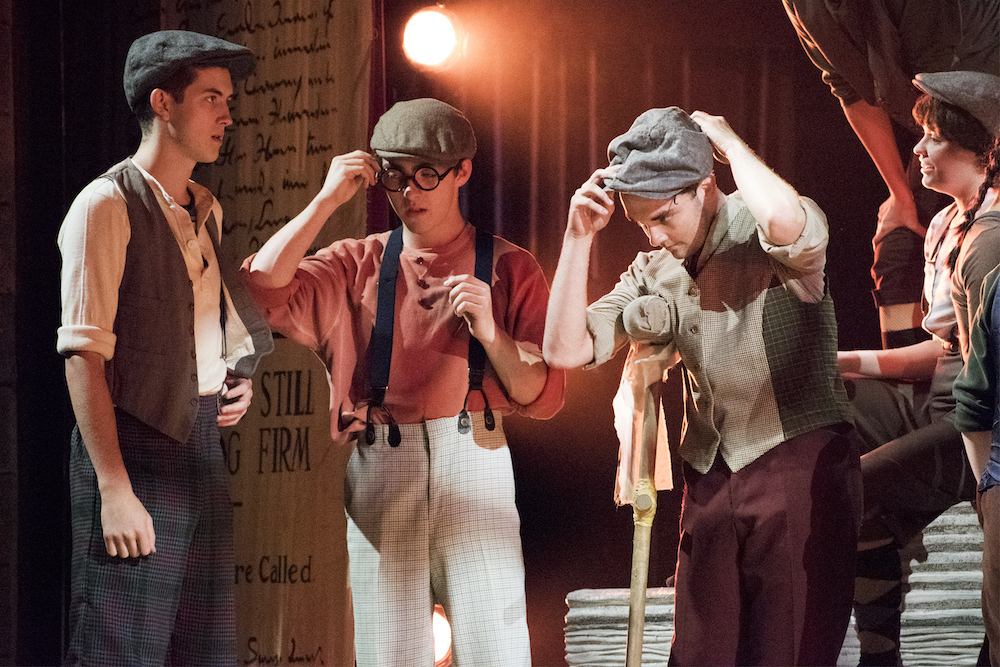 In June, a new arts journalism project got underway at the same time performers and crew for the musical “Newsies” by Floyd Central High Schools’ Theatre Arts program were in the last rehearsal weeks for a local run of their show.

That run is intended, in part, to prime the cast and crew for its performance at the Educational Theatre Association’s International Thespian Festival. Over a year ago, Disney asked the theater program to produce “Newsies” as one of the nation’s first high schools to do so and then showcase it at the festival, June 25-30, in Lincoln, Nebraska.

This new arts journalism project called Arts Bureau Edge involved a small team of young arts journalists who learned about musical theater, the history of “Newsies” and this production.

Cara Akin, Aniya Cathey, Angel Cathey, Irena Fletcher and Max LeDoux brainstormed story ideas, interviewed and photographed cast and crew members, and crafted their stories. They also held onto their positive attitudes on June 13 when a fire broke out at The Kentucky Center just before their scheduled tour of Whitney Hall to learn about the workings of the theater.

Although the fire displaced “Newsies” from its Whitney Hall venue, Floyd Central Theater Arts returned to its high school theater for June 21, 22 and 23 performances. Granted, this made it more difficult for the young journalists to get to rehearsals to photograph or observe. But they got their shots and interviews. The results are here.—Elizabeth Kramer

An intensive dance musical: Getting the dance down

What school was chosen by Disney as the pilot to put on this play? Have you guessed it yet? It is Disney’s “Newsies” being performed by Floyd Central High School.

This show is phenomenal in many ways, but most of all for the preparation that the dancers undertook. It is the main attraction of the show.

Dance captains Katelyn Carpenter and Sarah Seay had lots to say about the show.

They explained how the dancers are able to help each other.

“So, if one person has a combination down and one person is completely lost you can pair them together and they will figure it out together,” Carpenter said.

Choreographer Megan Bliss, who is a big fan of the original movie, was greatly inspired by the dancing, and she stuck with that pedestrian-style dancing.

“I really liked in the movie that they were regular boys, they weren’t necessarily fully trained dancers. They were a little gritty and pedestrian and that’s kinda the style I like to do. I pay a lot of respect to the original movie,” she said.

The dancers have done strength training and yoga since last summer, and the hard work has definitely paid off.

Visually, you can see that. Seize the Day!

“Newsies”: Delivering message on rights, encouraging children to speak up

“Headlines don’t sell papers. Newsies sell papers. Without newsies, nobody would know nothing,” says Jack Kelly, the main character in the musical “Newsies.”

The newsies were real boys selling papers in the late 1800s and working to afford the daily expenses in their community. However, what they were given wasn’t enough. So they went on strike.

They had a purpose, and one day everybody would know their name. They used one of the only things they had to stand up, their voice. Many didn’t understand their purpose. That was only the beginning.

Floyd Central High School, which is performing “Newsies,” is a public high school in Southern Indiana and “the best theatre school in the Midwest” according to Stage Directions Magazine.

My journalism camp recently interviewed people who brought the play together. Two of those people were actor Mitchell Lewis, who plays Jack Kelly, and director Robbie Steiner. They talked about how the play ties into the new era.

“There have been so many kids now standing up on their own and doing protests and boycotts,” Lewis said. “This show illustrates the power of kids and the change they can make on their community just by speaking and using their voice.”

Steiner also said Disney wanted as many roles to be played by girls as possible since in the original it was an all-boy movie, and many high schools don’t have that many boys to fill the roles. [Editor’s note: Many girls act and dance as newsies.]

This is just one popular play that had touched on child rights in recent years. Another play is “Matilda.” It is about a little girl whose mother and daddy are stuck up and mistreat her. Her school isn’t the best and has an evil principle. Yet, there is a great teacher who ends up taking custody of Matilda after seeing her home life. These musicals show how kids are in situations and find their own voices.

In conclusion, the children in “Newsies” pave their own way and show that children can impact their community when there is a problem. This gives children hope to know they don’t have to sit back and get treated horribly.

Children are the future. They need to know this, and I feel plays and books are helping them understand the whole era.

Ever wonder how what goes on behind the curtain in Floyd Central High School’s “Newsies”?

Michael Nevitt, the lighting designer/mentor for the show, talked about what goes on behind the scenes. He graduated from Floyd Central in 1986 and has been working in the lighting business for 30 years. On this production he works with 20 student crew members. (There are 74 cast members.)

The work on production started in September with crew members working on the constructing and painting the sets, some of the set pieces are very large and move throughout the production.

The cast and crew first performed “Newsies” at Floyd Central in November. Floyd Central was going to use the space in the Kentucky Center of the Arts for rehearsals and a run of shows — that is until a fire sparked in the ceiling caused them to cancel those plans. Instead, they moved the production to the high school.

“We were going to use the Kentucky Center as sort of a practice session for taking the lights down and setting them back up,” Nevitt said. “But it didn’t change that much for us.”

Nevitt has worked with Floyd Central on other works like “42nd Street” in 2016. For “Newsies,” he also did the computer drawings of the set layout for the different theaters the show will play in.

Most of Nevitt’s preparation in stage lighting comes from understanding what the technical aspect of the show is, he said. Nevitt said the show demanded projections and projection technology — some that Floyd Central had. But some that it did not. So, Nevitt turned to Florida-based Elation Lighting Inc., which loaned the school projectors.

“The students run the light boards and they hang the lights and everything,” Nevitt said.

The projectors also have a role to play.

“At one point Katherine types on a typewriter and you see what she is typing on a screen behind her,” he said.

Even the actors are aware of all the technical aspects at nearly all times.

“This show — especially with the three giant moving towers that we have on stage — we have to be very precise in what we do,” Mitchell Lewis, who plays Jack Kelly.

Another challenge, Nevitt said, is keeping track of all 50 microphones with belt packs.

“It’s quite a challenge when you have that many mics,” he said, “especially in this show where people are tumbling and flipping and fighting. One tumble, and a belt pack gets crushed.”

Once the run is over on Saturday, cast and crew members will load all of their sets, equipment, and projectors into three semis to take them to Lincoln, Nebraska, where they will get set up for the International Thespian Festival.