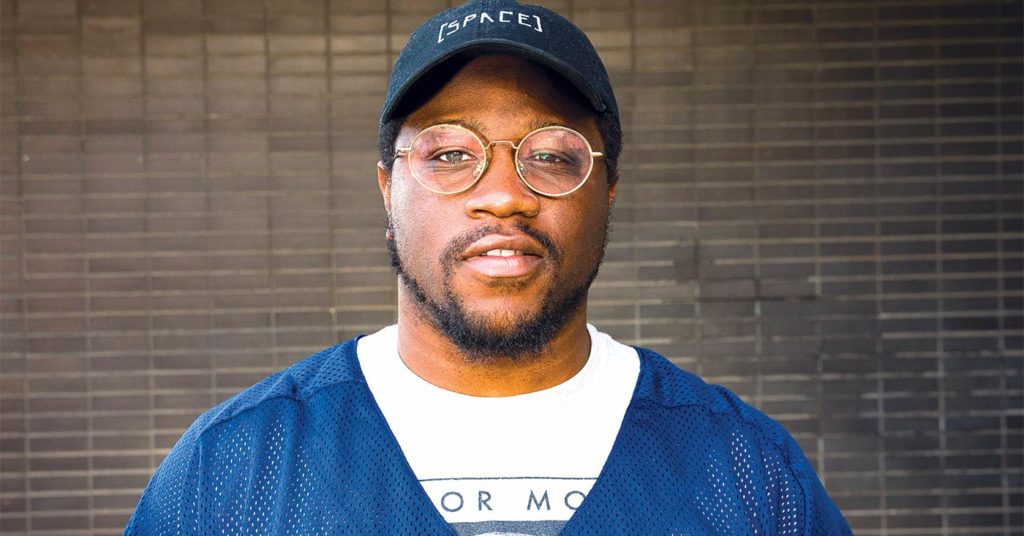 Situated on Colonial Park Drive, just across the river in Jeffersonville, lies Yons’ studio, an impressive and capable DIY rig. It’s cozy, with keyboards — his favored instrument — looming mightily over the other gear in the room. There’s a lone snare drum standing in the corner, while a vintage-looking bass is propped casually against the wall. The studio obviously is in constant use, and, for the past few years, it’s been Yons’ way of carving out a name for himself in the Louisville hip-hop arena. It’s where he makes his records, but the 32-year-old GE employee and father of a 2-year-old, has a bigger vision for the studio: In an effort to bolster the local hip-hop scene, Yons is spending heavily-discounted time working with other local, independent musicians who might not otherwise have the access or the money to obtain studio-level recordings.

He calls it “The Space Campaign.”

Boiled down, The Space (as Yons refers to it) is his attempt at creating a collective of hip-hop artists, as well as resources for Louisville musicians. But, in a society that doesn’t seem to want to look past what’s put directly in front of their faces, there are still plenty of hurdles.

“My vision is helping artists get the resources they need to be independent and to try and change the culture from how it is now,” Yons explained. “It seems like a lot of people feel they need to be signed to a label, and that people are biased toward the mainstream industry. Even if they’re good, people still tend to have a bias toward them versus if they are in the mainstream market. People just sort of gravitate to the mainstream music. For me, I want to change all that mindset. I want people to be like, ‘Hey, you can have an artist that’s good totally from their bedroom or whatever, who’s just as good as anyone signed to a label,’ you know. I want people to start thinking about supporting stuff because it’s good.”

While The Space Campaign’s efforts are still in the early stages, some artists are already reaping the benefits of Yons’ touch.

“He’s always thinking forward and taking other people’s ideas and turning them into a musical reality,” said Brad Roeder, who recently worked with Yons at his studio as part of an initial wave of The Space Campaign sessions. “He has such a good ear for production and can adapt to any artist he works with. I’m so pumped about the work we’re putting in. When Yons gets into his element, it’s like watching an episode of Rhythm Roulette or something.”

Welcome to The Space

The core element of The Space Campaign’s new initiative is the recording aspect. Every Sunday, Yons plans to invite a local, independent artist to his studio where they will work together to create, all the while charging only a nominal rate. “There’s a lot of unheard talent,” he said. “And a lot of those people can’t afford $500-an-hour studio rates.”

But any successful artist can tell you it takes more than a well-recorded song to reach recognition. A lack of local talent, as Yons sees it, is not the problem. It’s also about being able to play quality shows, making connections, creating a buzz and gaining access to listeners through reach and successful promotion. These are all matters The Space Campaign is itching to confront.

“I want to create a culture where independent artists can thrive and not have to compromise so much in the music industry,” Yons explained. “The tools are there for that now, for sure, but it’s really just attitudes and culture. And I want to see the art and culture be fully in the hands of the people who created it.“

The Space also serves as Yons’ visionary umbrella for his musical life: It’s a studio, a production house, a connected conglomerate of talent, a hive of resources — and even a label of sorts. “It’s a little bit of everything,” he tells me. But at its heart, it’s an intangible social club for independent artists, which seeks to provide them with a platform and the ability to keep the musical process all in-house. Yons shakes his head at the thought. “A lot of times you have to go to bigger studios and get so many people to do so many different things that we can actually do ourselves.”

Yons, a born-and-raised native of St. Petersburg, Florida, was steeped in music from an early age.

“Me and my homies, we used to play in church growing up. We played different instruments but when the best drummer wasn’t there, we were all trying to be the one drummer,” said Yons, pausing to laugh at the remembrance. “When I got a little older, when I was a teenager, I got into hip-hop. Rapping, doing my own songs, you know. It was a mixture of church stuff and hip-hop. We tried to do hip-hop stuff in church, like a blend of live music, but things were different back then. Like, rapping in church, you had to slow it down.”

In 2008, Yons made the move to Louisville. He had become familiar with the city over the years while on church youth conventions, and during this time fell in love with the city and with his future wife, Stephanie. But Yons was also in Louisville for another reason, and it would be a few more years before he entered the local music arena.

“It was initially my goal to come up here and go into ministry,” he said. “I was going to stop doing music and become a minister. But, over the years, I got kind of jaded with church and religion, the organized aspect of it, the rules. Music really replaced a lot of that.”

And although we can change the way we think, we can never really fully escape the things that have made us who we are, something Yons is more than aware of. “But, I mean, yeah, it’s definitely still a large influence on my music,” he admits. An influence that shines particularly bright on his latest single, “Inspiration,” a graceful, choppy-backdropped song prominently featuring a local church choir, which was released last month.

A turning point for Yons — and the seed of the idea for The Space Campaign — was at an art gallery in 2015, not long after he made his debut in the local scene. Yons (who was then going by Eons D) performed and served as a recording engineer at the multimedia event, and the facets of his talent piqued curious ears.

Yons’ friend and collaborator Jordan Jetson was also part of the event. At the time, the two had yet to meet, but Yons left an indelible impression on Jetson. “When I got to the art gallery to record and film there was this inconspicuous engineer recording all of us,” Jetson said. “When he finished recording my verse, I asked to hear all the others and was blown away by this verse by someone calling themselves Eons D. Turns out Eons and the engineer were one in the same. He had even produced the instrumental. That was when I knew I had to work with Yons. You don’t find that level of excellence by accident.”

Yons has certainly made other splashes as a musician/producer in the past few years. He’s only been releasing music since 2014, but he has worked with, and produced songs for, a gallery of Louisville entities like 1200 and Otis Junior. He’s also been nominated for a Louisville Music Award for Album Of The Year in 2016 for Inner Space, a collaboration with Jetson.

It becomes quite apparent when talking to Jackson that he’s not afraid of hard work, and he thrives on spinning multiple plates. The Space Campaign is not a profitable venture, and for someone who fully intends to eventually make music their day job, this can pose a bit of a problem, both time-wise and financially. But, after spending some time with him, it’s glaringly obvious that it’s nowhere near enough of a problem to stop the humble Yons.

“I try to stay grounded in reality most of the time,” he said. “But I feel like most of my goals are attainable. There’s a lot of talent on the scene, a lot of people with something to say. And we’re going to make a huge impact on the industry, inside and outside.”