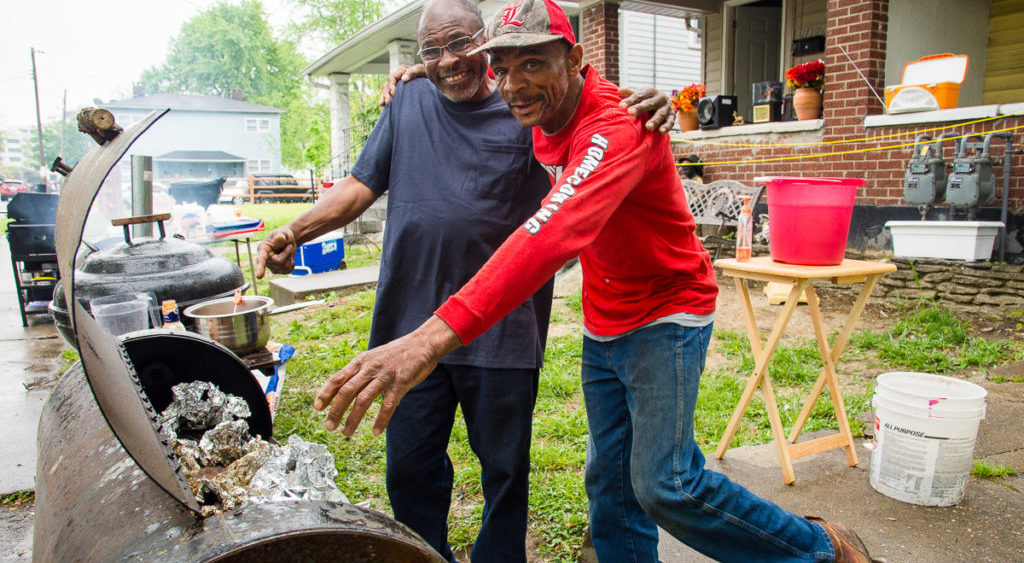 Every year, friendly faces greet you on the walk into Churchill Downs, as area residents and others sell food, clothes, rides and other items. Hanging out in the surrounding neighborhood is a good way to get quality barbecue and hear interesting stories. This is who we met this year.

“My parents owned the house, and when they passed away, I got the house. I’ve been on this corner for 70 years. We used to go in [to Churchill] all the time. I remember when I was a kid, it was a party from all night last night [Friday] to all night tomorrow night [Sunday], but it’s just dying down now. Not like it used to be, but I’ve been here since day one in 1948 … People come by and join us. Used to be more, before they had people park out at the fairgrounds. People like movie stars and jockeys and trainers. The FBI has set up next to us, and we hooked them up with electricity and water. ABC came around thinking we were selling beer, and the FBI agent told him, ‘If you bother these people again, I’m gonna throw you in a federal penitentiary, and it’ll take ’em 30 days to find you!’ That was a good year.”—”Hank” Stinson, on Hank’s Paradise party

“My grandma used to own Juanita’s Bar, and she didn’t close. She’d open on Friday and not close until 4 am on Monday. I would party [at Hank’s Paradise], walk down to Juanita’s, be coming out of there and the sun’s coming up. Walk back and just keep on going. Total insanity. There was dudes whipping a dude with a pool stick in the parking lot. The sun is coming up, and you wonder ‘What day is it?’”—Josh Stinson, on Juanita’s Bar

“We ain’t really making big money, but we’re keeping the neighborhood fed, and we’re cooking because the guests are in town. We serve them a fine meal and see them satisfied, and we’re satisfied ourselves by having a little money. We have ribs, chicken, hot wings, links, hamburgers, steaks — just a variety of meat. Larry has been out here for 55 years, and we just like to be out here drinking beer and socializing and wishing everyone the best.”—Dave Belt, on cooking during Derby

“I’m selling paparazzi jewelry, leggings in a different variety of colors. I have Derby hats, umbrellas and sundresses. They’re all very reasonable, and I’m giving out smiles  … This is my first year here. So far selling has been good. Not the best, but good. I normally do shuttles. I normally drive, but this year I decided to set up. I like it, but next year I’ll go back to shuttling. There’s some more money in shuttling than this.”—Miss Dee, on selling clothes

“I’m having fun. A lot of fun. I’ve been out here about 10 minutes so far today. I was out here yesterday [for Oaks] all day and will be out here all day [for Derby].”—Mya Washington, on her first Derby lemonade stand

“This year the cops decided to come down on [pedicabs] for some reason, so nobody has really made any money. So it’s pretty much been a debacle. The whole thing has been pretty rough. What they’re saying is that we don’t have a permit [to operate], but there isn’t an opportunity to obtain a permit either. That’s why you haven’t seen any of us. I just did make a $50 ride which was nice and things are looking up but everything is looking pretty precarious out here for us.”—Zach Slade, on driving a pedicab around Churchill Downs