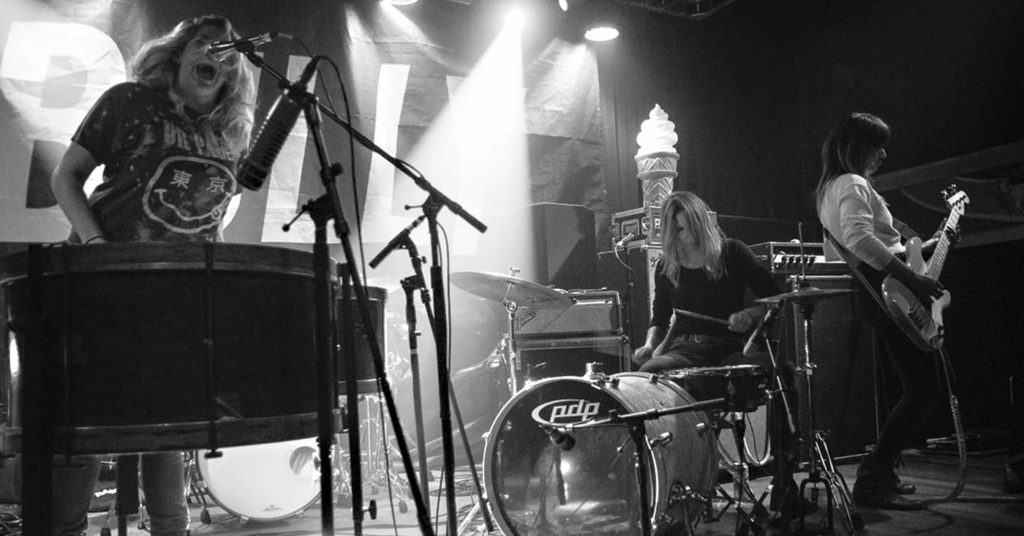 Brenda is a band that’s trying to make it work.

But retaining a healthy project isn’t just about devoting time to writing, recording and performing. It’s gotta involve some risk. For drummer/singer Brenda Mahler and singer/guitarist Matt Horne, that came with a change of scenery. Three months ago, the husband-and-wife core of the band relocated 2,330 miles to Fremont, California, where Horne accepted a new job. While still searching for a place to live, the couple stays in a Hilton hotel room with a small drum pad and guitar.

During their time in Louisville, Brenda released two EPs, a self-titled in 2015 and 2016’s summer-appropriate Nightschool, where they served up a mixture of fuzz-clad earworms and oddball love songs. Throw in some rampant guitar solos and Louisville-centric scenarios, and you have the foundation of Brenda’s forthcoming debut full-length album, Better Whatever, which was written and recorded in Kentucky, with a yet-to-be-announced release date. Brenda’s most recent lineup — the same one that is on the new album — featuring drummer JC Denison and bassist Shelly Anderson has disbanded, but Horne and Mahler plan to continue on with the project, no matter where they might be.

When they were recently in town a few weeks ago, I joined Horne and Mahler on a Friday afternoon in a Smoketown rehearsal space to listen to some of the most recent masterings of Better Whatever. It was the first time the two musicians heard the latest tweaks. They had already listened to a few tracks before I arrived, but the selection we sized-up together conclusively snuffed much of that doubt.

Among the new tracks, we listened to “Annex Slumber,” a dreamy, reverb-heavy version of Brenda not seen on previous records, featuring Mahler on lead vocals. “It’s sort of taking it back to where we were in 2012,” Horne said about the music they made before the band. “Brenda’s using this voice that she’s grown up within the church, and teaching piano, guitar and vocals. She has a much different voice than the voice that she uses in Brenda. Same with me.”

“I embody characters in a way for Brenda,” Mahler confirmed. “[This song] is my true voice.”

These characters and scenarios are part of the Brenda commentary and they usually tie into Louisville. Sometimes those stories leave town, such as with another song we listened to called “East Coast Ghost,” a poppy shoutout to Horne’s family back in Pittsburgh. “The first couple records were sort of related to our experience outside of Louisville,” Horne said. “It’s all a commentary, taking our lives, creating characters in our experience and commenting on where Brenda and I are.”

“And where the world is,” Mahler said. “Not even the world, specifically, this is more Louisville than a lot of our other records.”

And even though the band is no longer where it was a year ago, every member of the band who played on the record has positive things to say.

“I’m really proud sonically and musically of the songs on this new record,” Anderson said. “We spent many, many long hours in the basement over the course of a year arranging, rearranging, perfecting and demo-ing these songs. It’s always fulfilling and amazing to nurture songs along through that process and then to hear the final product.”

To find out more about the move and the new album, we asked Horne and Mahler a few questions.

LEO: The new album is finished and both of you just moved to California. Where do you go from here?
Brenda Mahler: Sometimes it felt like, ‘Oh no, we’re gonna have to start from scratch.’ But as long as Matt and I are playing together, I feel like Brenda is always gonna be the project. We’ve always had a changing lineup. The last lineup was awesome, we worked really well together.

Matt Horne: It was clean, it worked, it was really easy.

BM: Shelley and JC are insanely talented, so that was awesome to have them. We’ll find people.

BM: We could be back.

MH: We might be back, who knows? It all depends.

BM: Everything is up in the air. Floatin’ on.

Do you have a release date?
MH: Not yet.

MH: Brenda and I aren’t afraid of risk, so we’re willing to take any risk. Say tomorrow AC/DC calls us, and says ‘Matt and Brenda, we want you on tour with us for next few months.’ No problem, I will take that risk. I will quit my job and be there the next day, but it’s great Brenda and I have such an open, communicative relationship. It’s not a big deal for us to be thrown. We could land in Australia tomorrow and that would be fine. As long as I have this girl, the music doesn’t stop, the commentary doesn’t stop, the characters don’t stop. It hasn’t stopped for ten years and I really hope we’re able to proliferate that for another 60, 70, 80 years.

BM: Whoa, I don’t know about that. I don’t wanna live that long. Just kidding.

What are you listening to lately?
BM: Lots of Cardi B. I’m on that for sure. I’ve been on a Big Thief kick and I think they’re touring right now, so I’m super stoked. Love listening to sad music that makes me wanna cry all the time. I listen to a lot of punk rock, but I feel like right now, because it’s summertime, it’s Cardi B during the day, Big Thief at night when I’m trying to cry. I listen to country a lot.

MH: I’ve been listening to a lot of Rolling Stones. It’s strange, when I was 18 to 25, I would have said Beatles over Rolling Stones but…

BM: Oh, those are fighting words.

MH: But, now I’m saying Rolling Stones over Beatles. Just been listening to a lot of that good shit. It makes me happy to walk into work and put on ‘Miss You’ and just walk around. A lot of Townes Van Zandt, as always. I could listen to ‘Poncho and Lefty’ a million times and never get sick of it.