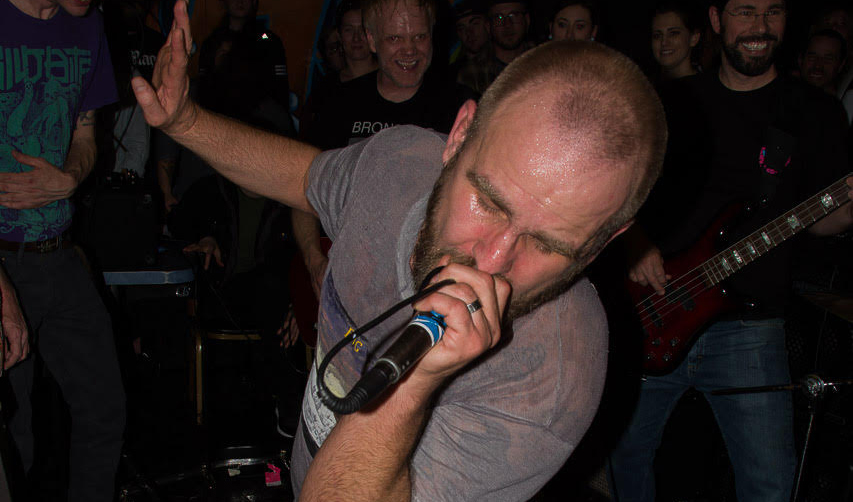 Rob Pennington (Photo by Emily May)

Above Fear, a new, six-song EP by Louisville-based hardcore band By the Grace of God has recently been released by State of Mind Records out of Long Island, New York. Sean A. Garrison engaged in a text message interview with their singer, Rob Pennington, while pretending to watch a scary BBC soap opera with his wife. Sean also tried to get some questions answered by guitarist Duncan Barlow but gave up when his messages were not answered in a timely manner (five to seven minutes).

LEO: Was there any particular reason you felt the need to make a new By the Grace of God record?
Rob Pennington: Have you listened to it yet?

Of course not!
Go to Spotify and listen to the record — that may help.

I don’t know what that is. I’ll go check iTunes. Yeah, it’s there. I’m buying it, and I’ll get back with you.

*A couple of hours pass, and this reporter started the half-assed process over again.*

This record is very strange — it really incorporates all types of styles. Who played on it?
Duncan [Barlow], Thommy [Browne], Tree and I.

Who the fuck is Tree?
Brian Roundtree. He’s been in the band since the early 2000s.

Man, Thommy is destroying on these tracks.
Yeah, he is a solid banger.

I hear a lot of Blizzard of Oz-era Ozzy in your singing on this record.
You know that Ozzy is my No. 1 of all time. He saved me in middle school.

Why didn’t Jay Polumbo play on this? I love that guy.
He just couldn’t make it work.

Too busy trying to kill elk with a flint knife, probably. Was there a time that you tried to hide or downplay the Ozzy in your singing?
I never really thought about it — it only took me 30 years to not cringe at the sound of my own voice. I guess that Ozzy and Guy are probably my biggest influences as I listen back now.

Guy? Guy who?
Guy [Picciotto] from Rites of Spring [and Fugazi].

Oh, right. I hate that guy. I always forget that he exists, because being reminded of him gives me ass cancer.
The way I never closed syllables at the ends of words, I got that from him, I think.

Was there any particular reason you felt the need to make a new By the Grace of God record?
I think we just miss each other. We had some song fragments lying around and decided to make them complete. Personally, I love our older material but really wanted to enter that creative space with these guys and play some new songs.

Where did you guys write and rehearse, or did you do it via the interwebs somehow?
We wrote most of the songs in Louisville in a few days and then recorded in La La Land. It was a furious pace, but lyrically I had a lot to say and the limited time to write sort of ripped open the lid on this can of worms I was holding. The process was also different because everyone contributed to the songwriting on this one. It was very collaborative and maybe we are better at that because we are older.

Do you feel like By the Grace of God is a better vehicle for some of your ideas than some of your more recent projects?
I love Black Cross and Black God, but they just have a different vibe.

Explain why, asshole. I’m trying to get you to do the majority of the work here, and you’re dropping the ball.
By The Grace Of God’s main brunt has always been the message — the music is simple, but the love is loud. People come to our shows, and they know what they are going to get and that we are not there to just entertain them. Playing with your childhood friends is special. What is consistent is that I love the guys I play music with.

What is the overall message?
There is no Us vs. Them. That is a lie. We just tell ourselves that so we can feel like we belong.

You want to elaborate on that?
I wasted enough time trying to define myself by what I am not when I was young. Now, I try to figure out how I am connected to others. I believe most of the ills of this world are derived from the sense of security and simultaneous lack of culpability we gather from tribalism. Are you squirming yet?

So are there any tracks on this new E.P. that you are particularly excited about?
‘Skinnerian Dilemma.’ I love the vibe and the lyrics are painted with a monologue I have been having with myself lately.