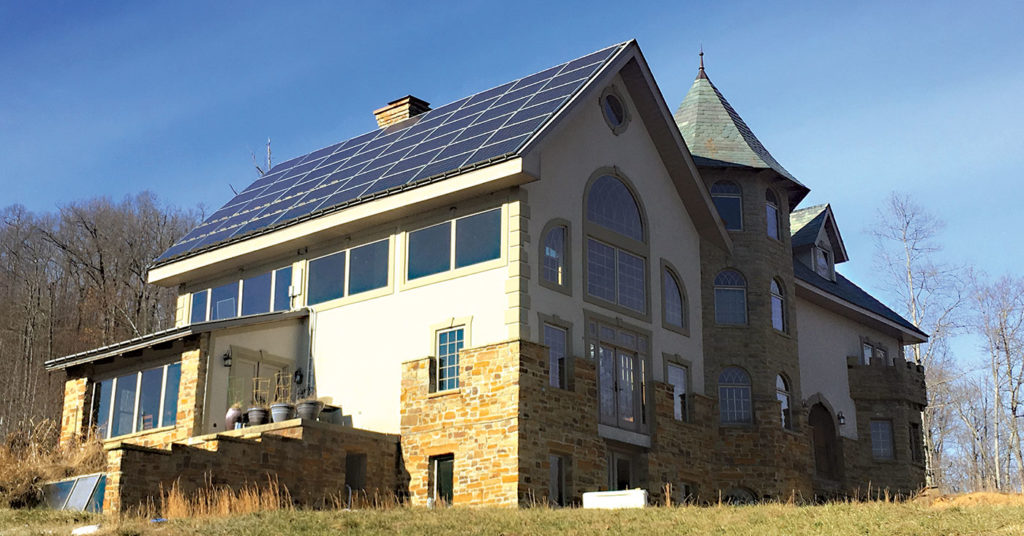 U.S. Rep. Thomas Massie drives a Tesla Model S, one of the most technologically-advanced, environmentally-friendly electric cars made.

It has Kentucky’s black “Friends of Coal” license plate.

He cosponsored a bill to get rid of the Environmental Protection Agency. (“I would rather start over with the EPA than fix the one we have.”)

Climate change may not be due to humans, he said: “What is the cause and effect?”

And he voted to delay implementation of ozone standards and voted to repeal a stream protection rule.

Yet 47-year-old Massie and his family tread lightly on the earth, perhaps even more so than many self-proclaimed environmentalists. He and his family live in an off-the-grid house topped with 57 solar panels and made with wood and stone from his farm.

In some ways, Massie, a Republican who represents Kentucky’s 4th District in Northern Kentucky, acts more like a Democrat. The seeming dichotomy of his lifestyle and politics underlines the complicated and subtle debate over environmentalism and sustainability.

“My approach is one of personal responsibility. I have a lot of people who preach to me, and then they don’t practice it themselves,” Massie told LEO. “I think, for instance, solar power is the way of the future, and I don’t think we have to mandate it.”

Conversely, he does not want government to get in the way. Kentucky power companies had pushed lawmakers in the just-ended legislative session to lower the credit solar users get for selling surplus energy back to the grid. Massie said he would not have supported such a bill, although he explained that it would not have affected his house because it is off the grid; the bill is a state issue; and he had not read the bill in detail.

“With all of these disclaimers established, I would not vote for the bill. The amount of electricity that is going onto the grid from people who have solar panels on their house right now, it’s not even six decimal points out… it’s in the noise, it’s probably not even measurable compared to how much electricity is produced and consumed on the grid,” he said.

“The grid is not being destabilized by the amount of solar that is on the grid at this point. It’s not costing the electric company, or even consumers, an even perceptible amount of money. So I have a hard time seeing the motive for the bill, and I think it sends the wrong message to people who are thinking of moving to Kentucky,” he said, adding, “Most states have a sign as you move over the border that says, ‘Open for business.’ I think, in Kentucky, we want to have a sign that says, ‘Open for all forms of energy.’”

Massie’s seemingly contradictory stance on small government and the environment has drawn sharp barbs from some, among them U.S. Rep. John Yarmuth (LEO’s founder), who told Courier Journal: “I guess he feels that if everyone would buy a Tesla like he has, that would make the EPA unnecessary.”

It also has helped to engender some alliances

Massie said his electric car has led to conversations with other members of Congress. For instance, Chellie Pingree, who represents the first district of Maine, parks next to Massie in the parking garage so they can both plug in their cars. They often stop to talk.

She drives a Chevy Volt and, like Massie, also farms.

Indeed, Massie doesn’t seem to fit any particular ideology neatly. Instead he combines the traditionally Democratic ethos of environmentalism with a Republican sensibility for freedom and accountability.

“I focus on the places we agree upon things,” said Massie. “I found out we like electric cars, we like solar panels, we like locally raised food, and we may get there from different paths.”

Here is a bit about Massie’s path.

Massie traces his interest in solar power to his experience as a graduate student at the Massachusetts Institute of Technology, when he was on the solar car team. MIT was participating in the GM Sunrayce USA in 1990. Competitors spent a year and a half building vehicles, and then raced them more than 1,800 miles from Florida to Michigan.

The solar car experience led up to his desire to be more self-sufficient and build a totally off-the-grid home for his young family. The home pairs solar electric panels and a battery storage system.

“My family has lived off of this for over a decade now,” said Massie.

Living off the grid has had occasional challenges.

“There was one morning where it was school picture day,” said Massie. “My oldest daughter was getting ready, and we were making coffee, and she was blow-drying her hair. The [storage] batteries were very low, and the whole house went black. My wife had to drive her to my wife’s parents’ house so she could finish doing her hair,” he said, laughing.

After that, Massie said, they got a propane backup generator.

In the early years, they would heat their home with a wood gasification boiler, a device imported from Europe that is extremely efficient, but requires ongoing cutting and handling of wood to feed it. The house has a mile of tubing under the surface of their floors. He said the floor radiant heat is a comfortable heat, but stocking the boiler with wood is a lot of work.

The house also has two geothermal heat pumps that use the surrounding earth to heat and cool the house efficiently. In the past, they have turned off their air conditioner at night to conserve energy in their house battery pack. Massie said that made for a few humid and uncomfortable nights in the dead of summer.

Many of those challenges were due to the fact that, for the past 11 years, the house battery bank was made up of lead acid batteries. But as his battery bank was reaching the end of its life cycle, Massie replaced it with a state-of-the-art Tesla battery pack with a much larger storage capacity and superior lithium-ion chemistry. Now, many of the previous challenges of living off the grid are either minimized or nonexistent.

Massie didn’t just buy the new Tesla battery to help power his home by ordering it from Tesla directly. According to Massie, Tesla, at this time, didn’t offer a PowerWall (the name of their solar storage battery system) that lets you live fully off the grid. But that didn’t stop him from bettering his battery situation. Massie hunted down a battery pack to suit his needs and had it pulled from a wrecked Tesla Model S.

Massie drove 450 miles to Georgia with a small, borrowed trailer, brought the battery pack back with him and proceeded to tear it apart and reassembled it to a different voltage. He said that even if Tesla did have an off-the-grid solution, it would have been about twice the $15,000 he paid for his salvaged Tesla car battery. Massie documented the process in videos he posted on YouTube (see box).

Massie was an early adopter of Tesla technology. He said he put a $5,000 deposit down on his Tesla Model S in 2010 when all the company had was a drawing of the car, not even a clay model. The specs met his needs with a promised 300-mile range and the ability to seat seven.

“To get my Tesla to D.C., the first time I did, my son came with me, and we bought like a $100 mattress at Wal-Mart and put it in the back,” said Massie. “We stopped at a campground near Morgantown, West Virginia. We charged for a few hours at the McDonald’s in Charleston, West Virginia, and that was enough to get to Coopers Rock, which is a campground near Morgantown, and we got an RV space, plugged into the RV plug and slept in the car and then drove the rest of the way to D.C. the next day.”

He said that kind of searching for a charging space like that is now a thing of the past with the proliferation of the Tesla Supercharging network.

Massie has four kids, all of whom helped build the house over a decade.

“The floor in our house is stone from our creek,” said Massie. Their house’s timber frame came off their farm after a storm in 2003 felled many of the trees. The stones on the outside of the house were also dug out of the property. And in several parts of their house, the floor is made out of cut scraps of slate from their slate roof.

“Most of the material in our house came from our farm or was reused from some other project in the house,” said Massie.

The Massies keep backyard chickens for eggs for the family and have 65 head of grass-fed cattle, which is the main endeavor on their farm.

On his property, Massie also has a Walipini, a greenhouse built down into the ground and with a clear, see-through roof. The warmth of the earth keeps it from freezing so vegetables can be grown year-round.

“Our children didn’t just get a lesson with the solar panels that you can make your own electricity, that you don’t have to be dependent on the power company, but they also got a lesson that everything in this world doesn’t have to come from Wal-Mart.”

The economics of sustainability is not something one hears about in debates over climate change or the use of straws and plastic bags. But it carries much currency for Massie and other conservatives.

Among them is Brad Strouse, a New Albany EV driver who has voted Republican for almost 40 years, although isn’t a party-line voter.

“I think he’s doing it right,” said Strouse, who drives a 2015 Chevy Volt and said he’s saved roughly $5,000 in fuel over his previous vehicle.

“He has the resources to go out and do this,” he said of Massie. “I am doing the best I can with the resources I have by going with an electric car. Conservation is not completely just for the green, conservation makes sense financially.”

Said Massie: “I think there are places where the left and the right can agree, but they don’t realize they agree, like on sustainability — it is almost synonymous with self-reliance.” •

U.S. Rep. Thomas Massie put together three YouTube videos to document his adventure after acquiring a battery pack from a wrecked Tesla Model S to power his off-grid home. Watch them here: